This one had a twist that wanted to make me shout.

"In Plain Sight" is the sixth of twenty-two in the Joe Pickett Series by C.J. Box. I'm reading them in order, as any sane person should do, and it's the best so far. 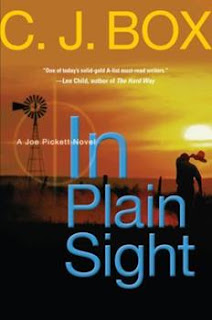 I pride myself in seeing the twists ahead of time. My pride took a beating in this one. I had to read the paragraph again to make sure I'd read it correctly. It was the kind that makes me question the mental stability of the author. Like "You crazy bastard. What kind of twisted mind comes up with that?"

Ranch owner and matriarch Opal Scarlett has vanished under suspicious circumstances during a bitter struggle between her sons for control of her million-dollar empire. Joe Pickett is convinced one of them must have done her in. But when he becomes the victim of a series of wicked and increasingly violent pranks, Joe wonders if what's happening has less to do with Opal's disappearance than with the darkest chapters of his own past. Whoever is after him has a vicious debt to collect, and wants Joe to pay...and pay dearly.

Some of the reviews thought the ending was a bit much, but that's why they call it fiction. My only complaint, and it's not so much a complaint as it seems to be his style, is that the book moves along at a steady pace until the last few chapters when Box shortens them up James Patterson style. It's like he's anxious to get to the ending himself and gets in a rush. Maybe it's just his thing. It works, I guess. It's just something I notice in his style.