In honor of Opening Day tomorrow!

A new book tells the story of the first woman to say “Yer out!” – Amanda “Mandy” Clement. She was the first female professional umpire. And she was a South Dakotan!

Jill Callison of the Sioux Falls Argus Leader has a story about the book, “Umpire in a Skirt: The Amanda Clement Story,” written by Marilyn Kratz of Yankton.

You can buy it in paperback HERE.
Posted by Mark Haugen at Wednesday, March 30, 2011 No comments:

The Black Hills over a century ago ...

If a picture is worth a thousand words, then this link is worth, well, a lot. Several photos over a century old offer a unique glimpse into the history of these Black Hills I call home.

I particularly like the photo of the five men riding shotgun on a stage coach hauling $250k worth of gold. Those dudes look pretty tough, but in those days, with your back against the wall, I could easily see why some unscrupulous sorts might be tempted to take them on and knock off the stage coach. Put a guy with a rifle up on the hill on each side of the road, have two other boys with pistols meeting them on horseback. The guys in the hills snipe out two of the guards, the guys on horseback take out the other three, the two in the hills come down and hop on the stage and they giddy-up away. Split four ways that's over $62 grand apiece. Not that I would have done something like that .. I'm just saying.

This link was sent to me by a U.S. Forest Service friend, which reminded me of a story another USFS friend recently told to me. In the central Hills is a town aptly named Hill City. Their high school nickname is the Hill City Rangers, and their logo is Smokey the Bear. Apparently, they are the only school in the nation officially licensed by the USFS to use the Smokey the Bear mascot/logo thingy.

That approval stems from a forest fire raging decades ago and threatening the town. As the fire neared, the football team stopped practice and joined the foresters in digging fire lines and putting out the fire. The USFS was grateful and said, "Thanks. You saved our city. We'd love to pay you, but ... hey, you can have Smokey the Bear!"
Posted by Mark Haugen at Wednesday, March 23, 2011 No comments:

Augie's 150 books you should read

I ran across this from the ol' alma mater. These lists usually give me an inferiority complex when I count how many of the books I've read on the list. I put this one at about 10, with a couple more books I own but haven't read yet.

In honor of their sesquicentennial, Augustana College asked its faculty and staff for the titles of the books they recommend.

See the Augie 150 books you should read before you kick off HERE.
Posted by Mark Haugen at Tuesday, March 15, 2011 No comments:

Listen to a chapter

Here is Chase Adams reading Chapter 10 of Joshua's Ladder. It was an expirement for both of us, as even though Chase is the voice of West River South Dakota on KBHB radio, he's a newcomer to the book-on-tape thing. He agreed to give it a shot, and then I dinked around and figured out how to upload an MP3 to Youtube. So we both learned something.

Chase is also an attorney, but don't hold that against him. He has an awesome voice that would make John Wayne envious.

The Argus Leader's Jill Callison recalls a serendipitous series of coincidences that worked out well for one fella.

AP has this story by James Macpherson: Sheriff Keith Gall is known as the “singing sheriff” for his a cappella performances at weddings and funerals. But thanks to a judge, the gun-toting tenor now spends more time with a grunting, testy audience of some 6,000 bison that outnumber people in his South Dakota county.

It's not SD, but this looks promising: ABC Greenlights Pilot About Edgar Allen Poe as a Detective in the 1840s.
... and ya, I know, my time and date stamp is all screwed up. I think I'm on Algerian time, which would explain why I was late for Mass too. It is 7:14 Rapid City time. I don't care what Blogger says.

The guys at ereadernewstoday.com features Joshua's Ladder and Hitchhiker 1 tonight, which has sent the download counter clicking in high gear.

The site caters to Kindle readers and offers only free e-books, so we offered a coupon there for a free JL download. Check it out now and later for all kinds of good free ebooks - from famous authors and shlubs like me.
Posted by Mark Haugen at Monday, March 07, 2011 1 comment: 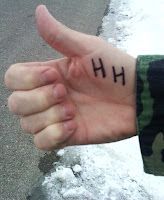 I've posted the first in a series of Hitchhiker short stories on my smashwords e-pub site. It's short enough to read on your cell phone or while you're at work! You can download to your computer or e-reader. And, best of all, it's free.

This is the first in a series of short stories where Lincoln Anderson shows he is a sucker for thumbs stuck out along the highway. He picks up these hitchhikers and often ends up learning as much about himself as he does about them. Today, he picks up a man claiming to be Jesus Christ. Together they drive from Rapid City to Denver and Lincoln's life is changed forever.

Lemme know what you think.
Posted by Mark Haugen at Sunday, March 06, 2011 No comments:

A nice five-star review for Joshua's Ladder showed up at Smashwords last night. I appreciate all the input I receive, whether in person or via the interweb. Here's what Carole had to say:

Only took a few pages and I was hooked, couldn't stop reading. Perfect combination of romance, intrigue, and humor. A character with such depth in his sadness, yet such courage and perseverance. Diverse characters with great humor - caught myself laughing aloud - always a good sign. Romance that allowed you to feel the emotions but wasn't micro-detailed, creatively written. I'm not one for "smut" romance novels, this was perfect. GREAT READ!! Can't wait for another.

The Freeman Courier is one of, if not the, best weekly newspapers in South Dakota; and that is mostly because Jeremy Waltner is one of the best newsmen in the state, no matter what size paper you're talking. Here is their recent cover story about a Freeman area, faith-based group called Rural Revival that has been established in hopes of leading a discussion as it relates to the future of agriculture specifically and rural lifestyles in general.

The Dakota Herald of Lemmon reports on the entire senior class from a Wichita, KS, school visited Lemmon recently. “But the hit of the week was clearly the tour of the Lemmon Police Station! The police chief was very accommodating, and they were placed in cells, put in handcuffs, and so on. They had a lot of fun.” Hmm, guess they don't get out much in Wichita.

Tim Giago, an Oglala Lakota, is the editor and publisher of Native Sun News. His column appears in the Mitchell Daily Republic. Here he recounts blizzards of the past and doesn't appear to sympathetic to the woes of Easterners: "Therein lies the difference between the hearty South Dakotans and those wimps back East. New York, Philadelphia and other points in the east have experienced a winter of blizzards. It seems that every weekend brings a new curtain of snow. Out here in the Northern Plains, we just snicker and hope they endure."

Seth Tupper of the Mitchell Daily Republic says it's not robins, but the sump pump, that is the first sign of spring.

Jane Hinrichs says it's never to late to love. Hinrichs lives with her husband and their six children on the edge of Blunt. She has a blog and writes for the Pierre Capital Journal.

Kaija Swisher of the Black Hills Pioneer takes a look at the upcoming tourist season. Hint: It's looking good.
Posted by Mark Haugen at Tuesday, March 01, 2011 No comments:

I swear it's the truth

I’ve never been a big swearer, in speech or in writing, and it’s not because I’m afraid of offending somebody. It’s just the way it is. It’s pretty easy to trace this character trait (one of my rare good ones) back to Grandma Lydia Renli.

One day when I was a kid back on the farm west of Canton, I let loose with a big “darn it!” bomb in front of Grandma. I thought “darn it” was pretty innocuous, but Grandma didn’t think so.

She explained to me that I was just replacing a swear word with a similar word, so the intent was the same. She told me it was the same as taking the Lord’s name in vain, and who was I to argue with perhaps the nicest woman I’ve ever met?

So I grew up avoiding “darn it”s and “Jesus!” and even “jeesh!” for fear of offending my Grandma. Add on to that, I don’t recall ever hearing my parents swear either. So I was raised in a relatively curse-free world where maybe the most offensive term heard on television in those days was Fonzie telling Ralph to “sit on it.”

To this day, one of the things I’m proudest of is that my kids haven’t heard me utter a swear word. Not that I haven’t on occasion; I just don’t in their presence. I figure they hear enough of that elsewhere, they don’t need to hear it from me.

But, when it comes to writing and presenting a scene in a bar room or in a roomful of bikers, it seems one might want to use the same words those people are likely to use in that setting. It’s realism and reality isn’t for the feint of heart.

With that in mind when I wrote Joshua’s Ladder four years ago, the dialogue between some characters contained some of the bigger words George Carlin made famous. Then over the years, as I would pick up the novel and do some more editing, I kept toning it down. Finally, just before publication, I took almost all of them out.

I just figured if a book was so reliant on a few swear words to be good, then it probably wasn’t so good to begin with. I thought it should be able to stand on its own with a good plot, some funny dialogue and interesting characters. I can leave reality-speak to the MTVs and HBO’s of the world.

Sure, there may be a couple that slip in, and sometimes I use that device Grandma didn’t like where I substitute a similar sounding word for the real swear word. But so be it. It won’t be so offensive to some, it contains a little reality for those who prefer that, and the book can sink or swim on its own merits.

I’m not trying to be James Patterson or Stieg Larsson here - just Mark Haugen. And as Dad use to say: There’s the right way, the wrong way, and the Haugen way. Not swearing much is the Haugen way.
Posted by Mark Haugen at Tuesday, March 01, 2011 No comments: