'Joshua' makes it to Alcester

Here's Robin reading "Joshua's Ladder" to Scooter on their deck by Alcester, SD. She just started it and "loves it" so far, while Scooter had "no comment." 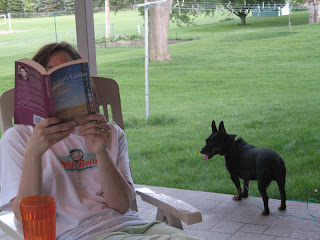 'Joshua' at a Houston Astros game

Angela here actually followed through on her promise (unlike some I won't mention, yet) who received a free copy of Joshua's Ladder with the understanding they would take a picture of themselves reading it somewhere interesting.

Angela took Joshua to a Houston Astros game. He said he enjoyed it very much. Thank you! It reminded him of a baseball reflection of his own from Joshua's Ladder. Here's an excerpt:

“I’m bettin’ my dad would’ve expected more out of me.”
“Dads always expect more out of their boys. Besides the
game isn’t over yet, Joshua.”
“Well it’s been a long halftime.”
“It’s your ball, son. You have to decide when to start
playing again.”
The sports analogies were unavoidable in this man-cave.
“Why isn’t what I’m doing good enough?”
“It’s all fine, Joshua. Nobody would blame you for holing
up in the woods for the rest of your life, minding your own business,
harming no one. But is that good enough for you?”
“I don’t know, Toby. That’s the shitty part. I don’t know.”
“Do you remember your game against Pierre? Do you?”
“Of course I do. Nobody forgets their state championship,
especially around here.”
“Soyou remember Big John hitting that line drive to
center. No idiot in his rightmind would’ve tried to score from second
on a ball hit that hard. But youtried it anyway.”
“Oncean idiot, always an idiot.”
“You were ten feet from the catcher and he had taken the
throw and was waiting there for you. Score tied. Everybody and their
momma was hollering: ‘Slide boy! Slide!” But you didn’t slide. You
dumb, hard-headed, son-of-a-gun didn’t slide. You lowered your skinny
shoulder, blasted off your feet and knocked that doughboy six feet in
the air. The ball squirted out of his mitt like a newborn. You scored.
We won.”
“That’s a pretty good play-by-play there Harry Caray.”
“So what happened to that hard-headed son-of-a-gun who used
to knock people on their butts?”
“You forget. I got the wind knocked out of me.”
“Forever?”
“Appears so.”
“Not to me it don’t. A person don’t just lose that. Once
you have it, it can always be found again.”
“How?”
“Don’t ask me. I’m just a dumb bartender.”
Posted by Mark Haugen at Tuesday, May 15, 2012 No comments:

Seems a couple weeks ago I was going to post something "juicy." That was a clever play on words that actually makes no sense when you don't know jack about "juicy."

Juicy is the nickname of the main character in my current project/book/novel, whatever. Juicy is homeless. He lives in Sioux Falls, South Dakota, and is the care-taker/ring-leader/advocate of the city's homeless population.

As you will read, if I ever get done rewriting the rewrites and actually publish the dang thing, Juicy has more character and virtue than most of the city leaders combined. (Insert legal claim here: This is a work of fiction. Any resemblance to persons living or dead is entirely coincidental and strictly a figment of the author's immense imagination.)

If you like sex, drugs and rock-n-roll, you'll probably like this book. And booze, plenty of booze in it. Remember: It's just my imagination that comes up with these things. I don't know any people who've actually had sex, did drugs, or played in rock bands. It's all my imagination.

The book is no deep-thinker. You won't learn nuthin' from it. There are no clever metaphorical nuances. It will never appear beside Shakespeare on the library shelf. But it's a fun ride. It will make you smile, and, hey, who doesn't need that now-a-days? And, guaranteed, you will never look at those pink flamingos in the neighbor's yard the same way again.

I should probably go work on it now. But, look! Breakfast Club is on HBO! Maybe tomorrow.
Posted by Mark Haugen at Monday, May 14, 2012 No comments: