You should read this article ...

This is a very touching story by Ron Fournier of National Journal regarding him and his son and "two presidents." Well worth the time to read.


How Two Presidents Helped Me Deal With Love, Guilt, and Fatherhood
Guidance from Bill Clinton and George W. Bush taught the author how to accept and understand
his son’s Asperger’s syndrome.
Posted by Mark Haugen at Friday, November 30, 2012 No comments:

Just finished Vince Flynn's Kill Shot - as good as all the rest. A review I read somewhere suggested that Flynn figures if one bad guy getting killed is good, then five bad guys getting killed is even better. Can't disagree with that.

There's an interesting interview with Flynn in Front Page Mag regarding politics in general and his newest novel, The Last Man.

** The Minneapolis Star-Tribune suggests 60 books for the Christmas shopping season - from fiction to biography to regional books.

** The Oregon Muse at Ace of Spades uses his Sunday book thread to feature "one of the most amazing content providers ever was this guy, novelist, poet, newspaper columnist, and playwright Don Marquis."

** Old friend and former coworker at the Argus Leader, Bob Keyes, writes for the Maine Telegram now. Today he features, "Caleb Mason, a book lover in Portland, starts publishing ebooks because they increase readers’ access." Good story, check it out.
Posted by Mark Haugen at Sunday, November 25, 2012 No comments:

After reading his obit in the LA Times and learning more about him, I'm pretty sure Larry Hagman is a dude I would've liked to hang out with.

For years, he was considered the unofficial mayor of Malibu, where he lived for decades in an oceanfront home. He often led impromptu ragtag parades on the sand while wearing outlandish costumes and flew a flag from his deck that declared “Vita Celebratio Est” — “Life is a celebration.”

For 25 years, he observed “silent Sundays,” refusing to talk, a move he initially made to rest his voice. After giving up cigarettes, he often carried a hand-held fan to blow fumes back toward smokers.

In Malibu, he had long been known as an amiable eccentric who routinely pulled his wardrobe from a vast collection of costumes and hats. He shopped for groceries while wearing a yellow chicken suit and played Frisbee in a Robin Hood hat and karate robe.

Posted by Mark Haugen at Saturday, November 24, 2012 No comments:

I read two books this week by by two of my favorite authors. It simply served as a reminder of what separates the men from the boys. Dean Koontz and Lee Child being the men. I being, well, you get it.

Koontz's Hideway came out in 1992 when he was writing with the initial "R." and shows that he's been whacked out of his mind for quite some time. I gave it a 7-plus rating and deeply analyze it as: Spooky good. I didn't realize it was made into a movie in 1995 starring Jeff Goldblum and Alicia Silverstone. I'll have to check that out.

Do you realize the dude has written 105 novels? That's crazy. And these aren't the co-written things that James Patterson doles out. These are one-man, one-mind books. I'm glad he hasn't sold out like Patterson.

Then I finished another Child's Jack Reacher novel Without Fail, the seventh in the series, which unfortunately, I've gotten out of sequence but it doesn't seem to matter. It's another 7-plus rating, which is pretty high in my card catalog, because the highest I have recorded is a 9. OCD, sue me.

This was a used book I picked up somewhere. I got a kick out of the last page where the previous owner listed his name, address, home phone and cell phone number. I guess he was awfully concerned about getting the book returned to him if he lost it, but not so concerned that he couldn't sell. Or, now that I think of it, maybe he died and his kids liquidated. I should call his cell and find out.

Reacher's words to live by in this novel: "Hit them fast, hit them hard, and hit them a lot."

Next on the reading pile: Vince Flynn's Kill Shot.

Posted by Mark Haugen at Wednesday, November 21, 2012 No comments:

The Zoo is open for reading

So here's the deal-ee-o. My third novel went live on Amazon last night. It's called Zoo Falls (see the monkey on the right, not the left). It is available in ebook form only, and only on Amazon, for the next 90 days. It's an exclusive deal they have, where anyone can buy the ebook for $2.99, or, if you are an Amazon Prime member, you can borrow the book for free. And that's a good deal even for the authors, as we get a little piece of that pie too.

Then, after 90 days, we can go crazy and do what our cold little hearts desire.

But don't think you can't get Zoo Falls if you are a rich iPad/iPod/iPhone user. There's an app for that! Get the Kindle app and download away.

As always, please leave reviews at Amazon. Unless you didn't like it, in which case you probably should check yourself into a mental hospital and worry about writing reviews later after the medication kicks in.

Zoo Falls - It won't make you smarter, but it'll make you laugh.
Posted by Mark Haugen at Monday, November 12, 2012 No comments: 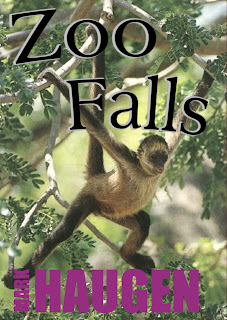 Posted by Mark Haugen at Saturday, November 10, 2012 No comments:

Falling into the honey trap

The unfortunate and unfolding story of Gen. Petraeus reminded me of this story by Phillip Knightley of the top five victims of honey traps.

Five lessons for would-be James Bonds and Bond girls
-- and the men and women who would resist them.

Those who aim to perfect the art of the honey trap in the future, as well as those who seek to insulate themselves, would do well to learn from honey trap history. Of course, there are far too many stories -- too many dramas, too many rumpled bedsheets, rattled spouses, purloined letters, and ruined lives -- to do that history justice here. Yet one could begin with five famous stories and the lessons they offer for honey-trappers, and honey-trappees, everywhere.

I was going to call this a humble brag, but, no, it's pretty much a straight-up brag. Sue me.

Arrived home this afternoon from pheasant hunting and the neighbor lady brought over a package that had accidentally been put in her mailbox. I opened it and it was a copy of my novel Joshua's Ladder. Odd, I thought. There was a note inside. It began:

"Mark, Damned if I didn't read your book cover to cover."

So far, so good, I figured, but waited for the punch line: "Thanks for my first experience."

Hmmm, that caught my attention. It continued: "Look inside the rear cover."

So I did. Written inside the back cover was: "Famous signature. (His name was signed) 78 years old. The 1st and only book I've read cover to cover."

Then there was another note explaining why he returned the book: "I want someone else to read and enjoy."

The guy is a WWII vet, survivor of the attack on Pearl Harbor. So, I think the moral of this story is that if you read only one book in your life, it should be Joshua's Ladder. Do it for your country!
Posted by Mark Haugen at Saturday, November 03, 2012 No comments:

Admittedly, I'm not much of a book reviewer. Who am I to tell Dean Koontz or John Sandford how to improve on a book that was better than anything I could write at this point?

tend to stick with offering deep insights like: "It was good." Or: "It was really good." I do, however, keep a recipe book full of index cards of each book I've read, and I assign them ratings on a scale of 1-10 (original). To be more cutting edge I do add pluses or minuses when necessary.

Well, I just finished Sandford's Mad River, and it was great - an 8+. It was the 30th book of his I've read, so obviously I kind of like the guy's writing. One of the things I enjoy about them is the Minnesota settings and references to South Dakota. It hits closer to home when he references towns I've visited or streets and roads I've traveled. Fortunately, I haven't run across any of the deranged murders.

For some better, more insightful, reviews check out this Goodreads page.
Posted by Mark Haugen at Thursday, November 01, 2012 No comments: