Fallen behind on my book reviews, which is difficult to do considering I haven't been polishing them off as quickly as usual. And I can't blame it on a sudden burst of writing inspiration either. Usually it's an either or. Doing one, so I'm lax in the other. 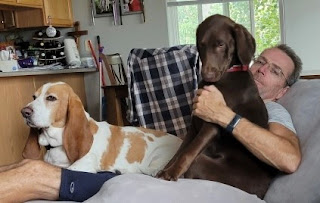 This reading malaise is a combination of laziness and a new puppy who hasn't figured out the routine of napping on the bed in my office while I work, but mostly laziness and trying to get to bed earlier so I can wake up at the crack of dawn with him. Ironically, the pups are named Finn, and his basset hound sidekick Huckleberry.

My three most recent ones were pretty good ones, all earning 7s on the Haugenometer: Targeted by Stephen Hunter, Pale Kings and Princes by Robert B. Parker, and Stalking the Angel by Robert Crais.

Fiddlers by Ed McBain was a pretty solid 6. Nothing to write home about though; or barely to write at home about either.

Posted by Mark Haugen at Thursday, September 22, 2022 No comments:

As I've mentioned before, I start heirloom tomatoes from seed in my greenhouse in March. I keep about 70-80 seedlings for my own use and give away another 40-50 to friends, most to one friend in particular.

We keep tabs on how my babies are doing. Usually I have a good crop and he has a good crop. This year, between deer, varmints and drought, my garden has sucked. His has not.

When I was complaining about my harvest, or lack there of, he said: "My wife's coming by your place tomorrow, want me to have her drop off some tomatoes?"

He didn't mean it as a punch to the gut, but I felt it. Sure, technically they were still my tomatoes, but he raised them. It would be like giving up a baby for adoption, someone else raising them, and then dropping them off at your house again when they turned 18. Okay, poor analogy, but you get my point.

I swallowed my pride and said "yes."

It hurt. But they tasted good so the hurt didn't last long.

My garden has picked up a bit since then, was probably a couple weeks behind him, but we still probably won't have enough to do much as much canning as usual this year. We'll see.

As we Minnesota Vikings fans are fond of saying: "There's always next year."

Posted by Mark Haugen at Friday, September 09, 2022 No comments: