I don't write about wifey much, mostly sticking to books, dogs and things that bug me, but I should. 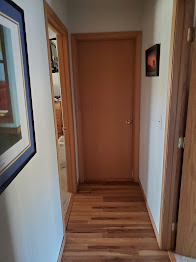 Here's the kind of person she is:

She knows how much I love my library/office/greenhouse/aquarium room. She's knows I love the solitude in there for one hour a night. She knows I even love the smell of it, particularly the smell of old books. If they could bottle the fragrance into a perfume and she dabbed a bit behind her ears I'd be all over her more than I already am.

As such, she's so thoughtful that even though my room is on the opposite end of the house from the kitchen, when she is frying something odoriferous like bacon or onions she will walk back to my room and close the door to keep the smell from entering. Even a good smell like bacon, you don't want your books smelling like bacon or I'd get hungry ever time I read.

Tonight, while I was out watering the garden, she made shrimp curry, very tasty but also very smelly. When I came in I looked down the hall and yes siree, she had shut the door.

FInished: 'When the Sacred Ginmill Closes' with a shout-out to Sioux Falls

Another Lawrence Block novel, and several characters in it, bites the dust. 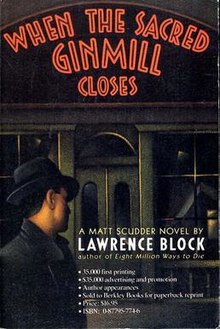 I like all of LB's books and "When the Sacred Ginmill Closes" was among my favorites of his. This is the sixth in his Matthew Scudder series. He wrote 10 more after this one.

Scudder really hits the booze hard in this one. A funny piece of dialogue was when he and a friend, both heavy boozers, talk about how another friend is an alcoholic but they aren't.

A surprise in the book was the mention of Sioux Falls. Remember, Block is a New York guy. He's lived his life there, writes from there and most, if not all, of his books are set in NYC. So it was really odd when out of the blue, while describing the waitresses at one bar said: "Waitresses came and went. They got acting jobs or broke up with their boyfriends or got new boyfriends or moved to Los Angeles or went home to Sioux Falls or had a fight with the Dominican kid in the kitchen or got fired for stealing or quit or got pregnant."

Even more odd, this was written in 1986, before Sioux Falls was really on the map at all on the national scene, as far as I remember. So it's curious to me how he name-dropped Sioux Falls.

Oh well, we South Dakotans always seem to have a need for acknowledgement and this works. Mike Miller is from South Dakota! Tom Brokaw! I don't see a lot of other states that do this - this need for recognition - like "Hey, we exist!" But it is what it is, and Sioux Falls is in one of LB's novels. Cool.

UPDATE: So I moved on to LB's next book in the Scudder series "Out On the Cutting Edge." It's copyrighted three years later and, lo and behold, there's more references to South Dakota.

Scudder is on a case and looking for a woman and Block writes:

"Toward the end of July Hoeldtke and his wife and the youngest daughter gassed up one of the Subarus and took a trip, driving up into the Dakotas to spend a week riding horses at a ranch and seeing the Badlands and Mount Rushmore."

And later: "It was possible she'd tried to call while her parents were mounted on horses, or hiking along trails in Wind Cave National Park."

Now it doesn't seem likely that Block just picked up an Atlas and picked South Dakota out of the blue. My guess is he vacationed here in the early 1980s before he wrote and while he was writing "The Ginmill" book and it carried over into the "Edge" book.

My guess is the New Yorker was smitten by South Dakota, and why wouldn't he be?

By the way, both books were excellent and registered 8+ on the Haugenometer.

I'm not sure why, but I find this story and the response to it very funny: Animal rights group offers $5,000 reward for information on who put 'Trump 2020' sticker on a bear

Black bears will not be voting in the upcoming election, but that's not stopping one bear from unknowingly showing a little support for the incumbent president.
Help Asheville Bears (HAB), an organization in North Carolina, has put out a $5,000 reward to find the person or people responsible for putting a "Trump 2020" sticker on the tracking tag of a black bear.

"Whoever put these political stickers on these bears is cruel and heartless," HAB wrote in a Facebook post. "HAB and our followers hope to stop and expose you.

While I generally think animal rights groups' hearts are in the right place, they're brains are a bit nutty and their anthropomorphism of animals is over the top.
So, somebody puts a four-inch sticker, not actually on the bear, but on what looks to be a 10-pound rubber tracking collar on a bear and the organization says: "Whoever put these political stickers on these bears is cruel and heartless." I doubt the bear even noticed the .002 ounce sticker, yet these people have no problem with the uncomfortable, itchy tire around his neck. And the ear piercing.
I suspect more of the issue with the sticker is who is on it. If it were a BLM sticker, you wouldn't be reading this story. It'd be a non issue. You might see some "Bears Lives Matter" memes on social media, but there'd be no out-cry and certainly no reward offered. Consistency is not a virtue of 2020.
And then: "HAB and our followers hope to stop and expose you." Yes, the serial sticker putter-onner. We must know where this person lives, where he works and get him fired or push him to suicide. Sticker-putting-onning is a gate-way crime. Next step, raping squirrels and a segment on "Dateline."
What do you think is the real motive here? Do you think they want to expose the evil sticker vandal or the evil Trump voter? What makes these people angrier, the sticker or the person on it?
And the other thing that gets me overall, is just the over-the-top hysteria and lack of relativism in many things going on today. Everything is the worst ever, everyone is a racist or Hitler or the country will never be the same. There's no context, no gray area. It's exemplified by this: "But to put a political sticker on the collar? No words can describe my anger and sadness."
You're so angry you are beyond words? Is this the angriest you've ever been? Up to now you've been angry about things and always found words for them, but this is uncharted territory? Or is your vocabulary limited and many things make you so angry you have no words for them?
I kind of figure after a couple rainfalls or dips in the creek, the old sticker is going to fade and peel off. Or while foraging through garbage cans or sticking his head in the raspberry bushes it'll scratch away. Maybe, just maybe, it's not the worst thing in the world, beyond words, certainly not worth alerting the news media to. Maybe it's no big deal, just a practical joke. Maybe Boo-Boo is a closet Trumpster and slipped it on Yogi the Biden-supporter while he was napping. Everyone knows what a jokester Boo-Boo is. Maybe don't get bent out of shape over everything?
The more important question CNN should be asking is: "Does a bear vote in the woods?"
Posted by Mark Haugen at Tuesday, August 04, 2020 No comments: