It didn't take me as long as expected, but I got the ol' Haugen homestead birdhouse cleaned up, repaired, repainted and remodeled. Below are the after and before pics. 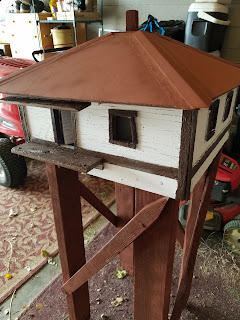 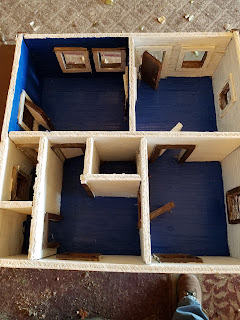 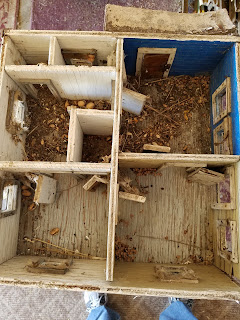 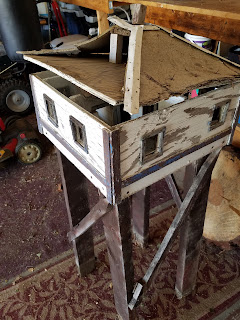 This 1-square foot, two-bed, one-bath cottage-style home is now available for rent. It's set in a beautiful (most years) garden surrounded by lots of tasty bugs and two nearby bird feeders for dining out. The deck features a spectacular view of the foothills of the Black Hills and with your eagle eyes can see the backside of Mount Rushmore.

My grandpa had the advantage of painting the interior pieces before he installed them. But I had the advantage of slender delicate hands to be able to get most of the spots painted, though not with Van Gogh precision. The lesson I learned from this project is that wood glue is my friend.


Posted by Mark Haugen at Wednesday, November 28, 2018 No comments:

Here's some interesting stuff to read you might have missed while arguing politics with your relaticks.

*** This is an interesting ruling from the Supremes on endangered species. And it was unanimous.

If you're into Supreme Court stuff, there's a new book out on John Marshall.

*** Sky Gilbert is a bit of a rabble-rouser and wrote quite a thinker for Quillette: If That's What It Means to Be a Writer, I Quit


My job as a poet is not to improve you morally, or to present a clear, kind, socially approved message.

*** Quit apologizing for speaking your mind! Zimmern apologizes for comments about Chinese restaurants

*** If you aren't familiar with Dennis Mukwege, you should be. He was recently named co-winner of the Noble Peace Prize for his work with rape victims in the rape capital of the world, Congo.

** Jim O'Neil at Nature has a review, Swansong of Hans Rosling, data visionary, of one of my fave books of the year: Factfulness. Everyone should read it, especially journalists, who apparently need it most. (Read the book and you'll understand.)


It throws down a gauntlet to doom-and-gloomers in global health by challenging preconceptions and misconceptions.

*** Here's the Christmas list I sent my kids. I hope they communicate and don't all buy me the same book:
Red War by Vince Flynn
The Other Woman by Daniel Silva
Target Alex Cross by James Patterson
Holy Ghost by John Sandford
Crooked Staircase by Dean Koontz
Forbidden Door by Dean Koontz
Posted by Mark Haugen at Tuesday, November 27, 2018 No comments:

Finished the new Jack Reacher & 2 others

Lee Child's "Past Tense" is the 23rd book in his Jack Reacher series. It's one of the best. You'd think Child would start pooping out on this character but he hasn't yet. 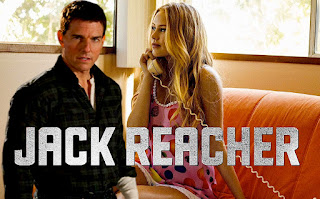 
Jack Reacher hits the pavement and sticks out his thumb. He plans to follow the sun on an epic trip across America, from Maine to California. He doesn’t get far. On a country road deep in the New England woods, he sees a sign to a place he has never been: the town where his father was born. He thinks, What’s one extra day? He takes the detour.

At the same moment, in the same isolated area, a car breaks down. Two young Canadians had been on their way to New York City to sell a treasure. Now they’re stranded at a lonely motel in the middle of nowhere. The owners seem almost too friendly. It’s a strange place, but it’s all there is.

The next morning, in the city clerk’s office, Reacher asks about the old family home. He’s told no one named Reacher ever lived in town. He’s always known his father left and never returned, but now Reacher wonders, Was he ever there in the first place?

As Reacher explores his father’s life, and as the Canadians face lethal dangers, strands of different stories begin to merge. Then Reacher makes a shocking discovery: The present can be tough, but the past can be tense . . . and deadly.

The most unique thing about this book in the series was how the suspense built. I was well over halfway through the book before the two plot lines began to intersect. On one hand you had the two Canucks in the forest and the young men planning to do something to them (I did correctly predict what they had up their sleeve). On the other hand was Reacher in a small town doing his version of ancestory.com. The ancestory thing is interesting in the whole scheme of the Reacher family tree. His visit to town also sparks a romantic interest between two people he interacts with. Their fate at the end of the book is one I didn't see coming.

Soon enough the bullets and broadheads started to fly. This was also one of the rare Reacher books were he doesn't have his own romantic interest or at least a one-night fling. Bummer for him.

Goodreaders gave it a 4.3 out of 5. Amazonians a 4 out of 5. I gave it a 8+ on the 10-point Haugenometer. I really enjoyed it but it just fell shy of a 9, which is reserved for books that cause me to lose sleep thinking about them.

** Previously, I finished "The Burning Room" by Michael Connelly. This is the 17th in the Harry Bosch series. It's one series where I'm not reading them in order and it tears me up inside.


In the LAPD's Open-Unsolved Unit, not many murder victims die almost a decade after the crime. So when a man succumbs to complications from being shot by a stray bullet nine years earlier, Bosch catches a case in which the body is still fresh, but any other evidence is virtually nonexistent.

Now Bosch and his new partner, rookie Detective Lucia Soto, are tasked with solving what turns out to be a highly charged, politically sensitive case. Starting with the bullet that's been lodged for years in the victim's spine, they must pull new leads from years-old information, which soon reveals that this shooting may have been anything but random.

** Previously to that, I finished The Canceled Czech by Lawrence Block. This is the second in the Evan Tanner series. I am reading them in order and sleep much better at night for doing so.

Tanner is a unique character. He doesn't sleep and knows several languages. He goes places where even the CIA doesn't want to go.


"The Canceled Czech" finds the sleepless adventurer on a mission to Czechoslovakia to liberate a dying man, who turns out to be a Nazi. For his troubles, he finds himself leaping from a moving train, tangling with an amorous blonde, and playing the role of a neo-Nazi propagandist. Just another typical work day in the life of "the thief who couldn't sleep".

All in all, a month with Lee Child, Michael Connelly and Lawrence Block is a great month.
Posted by Mark Haugen at Monday, November 12, 2018 No comments:

Admittedly, I enjoy a good argument. It gets the blood flowing, heart pumping and neurons snapping. It's been said I'm pretty good at it. But there's one "person" who frustrates me to no end and refuses to listen to reason. It's that dang Alexa.

When we discussed purchasing her a year ago or so, I threw cold water on the idea. "The last thing we need is another gadget around the house," were I believe the words I used. But, as is often the case, rather than arguing about it, wifey wins said arguments by just going out and doing what she wants anyway. She bought Alexa.

And I actually enjoy it and use it a lot. I like the corny jokes she replies with when I say "good morning." I like that she will play whatever music I'm in the mood for, gives me scores of games, times of upcoming events, answers to trivia questions. She's like an easy Google.

On my lunch hours I have four songs I rattle off for her to play while I sing along chewing my peanut butter sandwich. Same songs, same meal, every day. It's how I roll.

The songs are:
"Last Thing I Needed First Thing This Morning" by Willie
"High Cost of Living" by Jamey Johnson
"Blues Man" by Hank
"Do Ya" by KT Oslin

Alexa plays them, I sing them loudly, the dogs howl along, the neighbors call the cops, and I go back to work a happy man. Five days a week for the past year. No questions asked.

Until this past Friday.

For some reason, Alexa decided to play KT Oslin's "You Can't Do That" instead. Does that sound like "Do Ya" to you? Doesn't to me either. It's not like I developed a lisp overnight. I didn't acquire a southern twang or a Boston accent she can't understand. Even without peanut butter in my mouth and with distinct innunciation Alexa refuses to play "Do Ya." I've asked in a several different ways, even had wifey ask. Alexa refuses. What happened? Did the song disappear? Did Alexa developing a hearing problem?

This bothers me to no end and has thrown my OCD life out of whack. It's now three songs, not four like it's supposed to be in a sane world. I'm a man without purpose, a lost soul stumbling back to work (which isn't helped by the usual off ramp I take being closed to construction). My concentration is off, focus is gone. I don't pay attention to speed limits (at least now I have a reason). I'm more susceptible to road rage. I'm grumpier than usual. And it's all because of this Alexa person's overnight refusal to listen to me.

I've taken to swearing at her. Hollering at her. Insulting her mother. Even tried saying "Please." But all to no avail.

All I want is my KT Oslin to sing in one of the sexiest voices in country music history: "Do ya still get a thrill when you see me coming up the hill, honey now do ya? Do you whisper my name just to bring a little bit of comfort to ya? Or do you lie awake thinkin' I'm the biggest mistake you ever made? Do you miss me when I'm gone, but sometimes wish I'd stay gone just a little bit longer? Honey, now do ya?"

The thrill is gone now. Come back KT, before I do something Alexa is gonna regret.

It's looking like a version of "Bubba Shot the Jukebox" is going to play out in this house unless she comes around. I'm sure it'll be in all the papers.
Posted by Mark Haugen at Saturday, November 03, 2018 No comments: