Our annual trip to Champaign, IL, to visit the middle child and her hubby always includes an Illini football game and a trip to the Jane Addams Book Store. 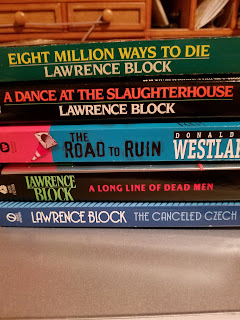 It's become my favorite used book store. I don't know its history but my guess is it is a former apartment building or old home. It is three-stories tall and has numerous small rooms and nooks and crannies with books stacked to the ceiling. There are some pretty cool photos if you Google it.

We were fresh off a visit to a corn maze, and the bookstore was actually more of a challenge to navigate.

So son-in-law and I went to browse while wifey and my daughter went to Walgreens (code name for margaritas).

When we later met up with them at the rooftop bar, I unveiled my purchases to them. It raised some eyebrows as the family grew a little concerned about the titles. There may have even been a suggestion that I could use some professional help (not the first time that's been suggested) or it would surely be a topic of discussion at my Supreme Court hearing (as if I'd ever make it past my high school and college days).

But Lawrence Block and Donald Westlake are two of my favorite authors and if that sinks my nomination, so be it.
Posted by Mark Haugen at Friday, September 28, 2018 No comments:

*** I bought the book Field of Blood: Violence in Congress and the Road to Civil War on pre-order for my politico daughter's birthday. It arrived yesterday. At first glance of the cover, it gives the impression it might be some light-hearted anecdote-filled book of funny tussles, but it's not.

From WSJ:
Yet to those involved, the fighting was serious business. Reputations for courage and honor had to be acquired and defended; in the infancy of American democracy, voters rewarded men who stood up for themselves — and, by extension, for their constituents. This was especially true in sections of the country where violence or its threat was part of daily life. As Ms. Freeman points out, white rule in the South continually depended on violence, actual or potential, against slaves. In the West, violence drove Indian tribes off their land and made it available to settlers. Andrew Jackson, an offstage figure in Ms. Freeman’s tale, was a hard-scrabble Carolina kid who first made his reputation in Tennessee as an Indian fighter. He became a national hero by defeating the British at New Orleans in 1815. When he ran for president in the 1820s, many Easterners were appalled to learn he had killed a man in a duel. Westerners and Southerners took the opposite view, praising Jackson for avenging an insult to his wife.

The author is a serious writer. Joanne Freeman.

From Wiki: Joanne B. Freeman is an American historian and tenured Professor of History and American Studies at Yale University. Having researched Alexander Hamilton both independently and collaboratively with mentors and peers for more than forty years, she is regarded as "a leading expert" on his life and legacy. In 2005 she was rated one of the nation's "Top Young Historians."

*** South Dakota writer Joseph Bottum emailed that: The second installment of my twice-a-month column in the London Spectator, noodling about life and politics on the prairie, is now available online. And I thought I would send it along for your amusement, if only because it opens with a scene in the Sundog coffee shop here in the town of Madison.

*** My 7th grade niece was at my house this summer before going on a trip through Yellowstone and back to the east side of the state. She's a big reader, so I picked out a handful of books she might be interested in and borrowed them to her. She also had the privilege of sleeping in my office/library/greenhouse/conservatory. So all that knowledge could seep into her brain by osmosis.

One of the books was Huckleberry Finn. We had a little talk about the language in the book. I told her that's how they talked back in that day and that's why those words are used but that they are hurtful words and she should never use them. (On a related note, if you get the chance watch the PBS documentary on Mark Twain, where several African-American historians make similar arguments).

Anyway, she texted me the other day that she'd finished it and loved it. Take that you foolish censoring librarians and schools.

*** Was talking to a friend about The Handmaid's Tale the other day. She's a history and political science major, very well read. We were laughing about these goobers who dress up like red penguins to protest at events and I told her I got the gist of what they are trying to say but never read the book nor saw the television show.

She said she read the book and it was the absolute worst book she's read in her life. She said she seldom, if ever, throws a book away; is kind of a hoarder of them, like me. But she threw it in the garbage.

So I'll probably pass on it, even though Barnes and Shnable keeps pimping it to me in their emails.

*** And finally, the author of 'How to Murder Your Husband' is arrested for allegedly killing her husband.

She should have written: 'How to Murder Your Husband and Get Away With It'
Posted by Mark Haugen at Friday, September 14, 2018 No comments:

For those who think you have to read popular contemporary authors to be cool, you're wrong. Some of the best, like Donald Westlake and Larry Sanders, are no longer with us in body but alive and well in spirit and on the written page.

Westlake is a Grand Master mystery writer who is one of my favorites. He weaves plot twists and humor like none other. I recently finished his very clever "Jimmy The Kid." 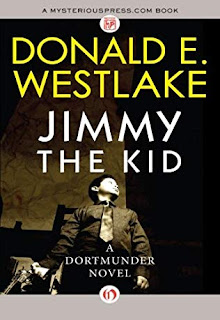 Westlake also wrote under several other names, including Richard Stark. In JTK, his famous Dortmunder Gang bases their crime on a book one of the Gang read, which was written by Stark. It worked so well for one of his former protagonists, Parker, that they figure it will work for them if they follow it to the tee.

But nothing goes as planned for the Dortmunder Gang, ever. It left me chuckling up until the final line. I gave it an 8 of 10 on the Haugenometer. Amazonians gave it a stellar 4.4 of 5.


Kelp has a plan, and John Dortmunder knows that means trouble. His friend Kelp is a jinx, and his schemes, no matter how well intentioned, tend to spiral quickly out of control. But this one, Kelp swears, is airtight. He read it in a book.

In county lock-up for a traffic charge, Kelp came across a library of trashy novels by an author named Richard Stark. The hero is a thief named Parker whose plans, unlike Kelp and Dortmunder’s, always work out. In one, Parker orchestrates a kidnapping so brilliant that, Kelp thinks, it would have to work in real life. Though offended that his usual role as planner has been usurped, Dortmunder agrees to try using the novel as a blueprint. Unfortunately, what’s simple on the page turns complex in real life, and there is no book to guide him through the madness he’s signed on for.

Among the great lines, that are best in context with the story:

"Beer drinkers got a low center of gravity."

"Money paid to a kidnapper is not deductible on your income tax."

As for Larry Sanders, "McNally's Chance" was actually written by Vincent Lardo, as he carries on the Archie McNally series upon Sanders' death. He does a good job of it. 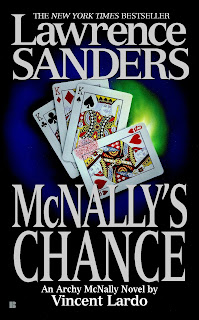 When bestselling romance author Sabrina Wright asks for Archy McNally's help in finding her missing husband, Archy is quick to write it off as a simple domestic case. But this one's a page-turner of the first order: Sabrina's daughter ran off, she sent her husband to find her, and now they're both missing in action.


If only Sabrina hadn't told her adopted daughter that she really is her natural mother. That sent daughter looking for father, a Palm Beach blueblood who paid Sabrina handsomely for his anonymity. So it's up to Archy to find the fugitive family members before local gossips get wind of the story-and start pointing fingers at some of Palm Beach's most prestigious names.

It was entertaining, as all McNally books are, but wasn't riveting like JTK. I gave it a 6. Amazonians gave it a little better 4 of 5.

Among the best lines: