The 31st book in the series is unique in that it is the first one I can recall which is not Minnesota-centric. It takes place in Florida where Lucas is called in, now with the U.S. Marshals, to investigate the murder of three Coast Guard members. He recruits Virgil to serve as a deep sea diver, a talent I was unfamiliar with for Virgil.

An off-duty Coast Guardsman is fishing with his family when he calls in some suspicious behavior from a nearby boat. It's a snazzy craft, slick and outfitted with extra horsepower, and is zipping along until it slows to pick up a surfaced diver . . . a diver who was apparently alone, without his own boat, in the middle of the ocean. None of it makes sense unless there's something hinky going on, and his hunch is proved right when all three Guardsmen who come out to investigate are shot and killed. They're federal officers killed on the job, which means the case is the FBI's turf. When the FBI's investigation stalls out, they call in Lucas Davenport. And when his case turns lethal, Davenport will need to bring in every asset he can claim, including a detective with a fundamentally criminal mind: Virgil Flowers.

I cruised through the book (over 400 pages) in about three nights. It rated an 8 on the 10-point Haugenometer. Others seemed to agree as Goodreaders gave it a stellar 4.6 of 5.

** Previous to that I did what I said I wasn't going to do and read another Tim Dorsey book - No Sunscreen for the Dead.

It's the 22nd in the Serge Storm series.

The books focus on psychotic Serge and his stoner buddy Coleman traveling around Florida causing trouble. This time at senior living communities.

Serge and Coleman are back on the road, ready to hit the next stop on their list of obscure and wacky points of interest in the Sunshine State. This time, Serge’s interest is drawn to one of the largest retirement villages in the world—also known as the site of an infamous sex scandal between a retiree and her younger beau that rocked the community.

What starts out as an innocent quest to observe elders in their natural habitats, sample the local cuisine, and scope out a condo to live out the rest of their golden years, soon becomes a Robin Hood-like crusade to recover the funds of swindled residents. After all, our seniors should be revered and respected—they’ve heroically fought in wars, garnered priceless wisdom, and they have the best first-hand accounts of bizarre Floridian occurrences only Serge would know about. But as the resident’s rally for Serge to seek justice on their behalves, two detectives are hot on the heels of Serge and Coleman’s murderous trail.

In this epic adventure that jumps between present day and the tumultuous times of the Vietnam war, mystery fans are in for a witty and deliciously violent delight from the twisted imagination of bestselling author Tim Dorsey.

The books are so formulatic and inane, but they are funny and you don't need to use your brain. Those kind of books have a place when your mind is in that place and mine was.

It did the job - entertained - and was one of the better ones recently in the series. I gave it a 6 of 10. Unbelievably, to me, Amazonians gave it a 4.7 out of 5, which probably says as much about our society today as anything. Maybe people are just looking for an escape ... or doing a lot of drugs.

For one week this March and another the previous March 2020 (we book-ended the Wuhu) wifey and I vacationed at St. Pete's Beach in Florida. We have a favorite spot and enjoyed each stay immensely. We stayed Wednesday to Wednesday. One of the highlights each time was on a Sunday. Specifically, the church service in St. Petersburg.

My religious journey could fill many blog posts but in overview: I was raised Lutheran and converted to Catholicism about twenty years ago. There have been varying degrees of devoutness along the way, with highs and lows. It's safe to say the last three years have been a low. I've attended mostly out of obligation and during COVID mostly remotely via the interwebs. The past couple years, I feel like I've been a better Christian than a Catholic, so I guess that's the important thing.

But those two services in St. Petersburg have kept my Catholic flame flickering.

It's a smaller church in a residential neighborhood. The African-American priest refers to it as "the hood" though I would not have categorized it as such. But, then again, I visited at 10 a.m. on Sundays so probably catch the neighborhood in its prime.

The congregation was diverse. If I had to guess, I'd say half white, quarter black, with the rest Asian and Hispanic. Young people, old people, singles, and families. They were very friendly and greeted us with open arms.

They were a reflection of the priest. Out-going, exciting, oozed the spirit of Christ. He wasn't the stoic, formal, dry priest I see so much of. Don't get me wrong, I've known some good ones, some great ones even. But lately there've been none, other than him, who made me wish the service was longer.

At the end of our first Mass there, he asked who in the congregation had a birthday that week. A couple did. Everyone sang "Happy Birthday" to them. Then he asked if there were any visitors. We stood and he asked us to tell where we were from and what brought us there. Then everyone applauded.

His homilies (sermons to you non-Catholics) were touching, well thought out and made you want to hit the streets to tell your neighbors about Christ (or blog about it). He slipped in a couple "let me hear an 'Allelujiah!'s and the crowd responded. Not your average South Dakota priest.

We visited with him a bit as we left and he told me he'd served at a parish on the Pine Ridge Reservation years ago. He knew West River well. When we returned home from our first visit, I emailed the priest to tell him how much we enjoyed his Mass.

Upon our return visit he saw me and said: "My South Dakota friend." When I received communion from him he gave me the host and then patted me on the shoulder like a friend.

A good contrast was provided from the previous week in South Dakota where the priest during announcements at the end of Mass told us things would be returning more to normal at services. Though, during the part where we normally greet our neighbors with handshakes and "Peace be with you"s, there would be no handshaking and "I don't want you flashing peace signs back and forth."

Well, in St. Petersburg, the time came for "peace be with you" and the priest led the charge in flashing peace signs with the congregation and us with each other. It wasn't disruptive, it wasn't sacreligious, it wasn't disrespectful. It was fun and it was joyful.

I'm there to hear the Lord's word, celebrate it and feel better about life and raring to attack the week ahead feeling like God is on my shoulder guiding my actions, my decisions and my words.

After this recent Palm Sunday service in Florida, my wife got in the car and said: "I could've sat there another two or three hours."

I guess I wouldn't go that far, but I felt joy in my heart and Christ's presence with me. That's a job well done, sir. Wish it could happen for me more than two Sundays out of the last 52.

We'll probably never move to Florida, but when we visit we know where we're going to church. Let me hear an "Allelujiah!"

Pepper seeds not doing so hot. Going on three weeks and I'm not happy with the germination. Maybe 30 percent when they should be at 70. I started them before we left for vacation, in the greenhouse but without the heat mats on. Turned those on when we got home. Thought it would be warm enough to get them going but maybe not. 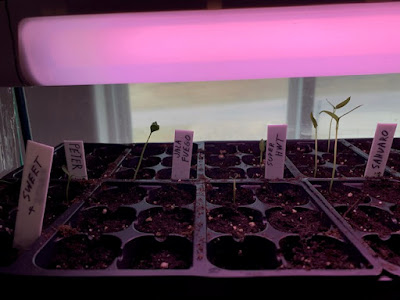 I started some purple coneflowers and black-eyed Susans a couple months ago for a new flower bed I built last fall. They are doing real well. Not sure when I want to plant them though. Winging it there. Will harden them off for a 10 days and maybe shoot for the 20th. We'll see. 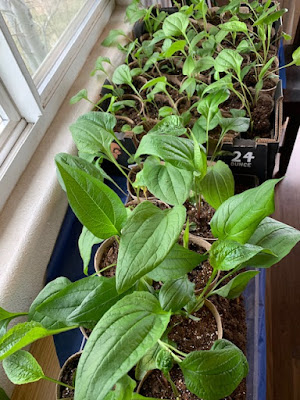 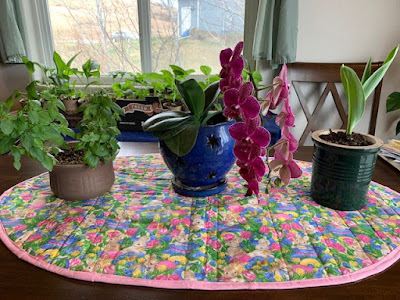 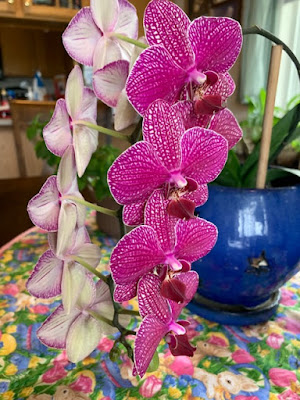 The dogs annual trip to town

Took the boys (aka Stanley and Huckleberry) for their annual trip to the veterinarian for their shots and check-up. It was particularly satisfying to take Stan, since three years ago this vet's prognosis for him was 2 weeks to 2 years to live with his cancer. She also recommended amputating his leg where the first cancer was found. But now he's going on 12 years old, a lot slower, a little grayer, and still has all four legs.

Though she might've called that one wrong (thankfully), I like our vet. She does a good job of explaining things and isn't in a rush to get out of the exam room.

However, things have changed there. They are still COVIDphobes at the clinic and have new procedures. Well, new since we were there last March.

You call from the parking lot when you arrive. A tech comes out and takes the dogs inside, one at a time. Then the doc calls you when both are done, explains stuff, answers questions, then transfers the call to the front desk which takes your credit card number over the phone.

It's actually pretty slick and quicker as they don't leave you sitting in the exam room with your dogs waiting for doctor.

The boys are always very good. They know the routine. We walk in, sit and wait. Then they hop on the scale and we go to the exam room.

That's what Huck, the basset hound, thought was going to happen this time until he arrived at the door and noticed Stanley and I were still standing back beside the pickup. That's when the 65-pounds of muscle and torque decided he wasn't flying solo on this mission. It was funny. I thought he was going to pull the poor tech lady to New Underwood and there wasn't much she could do about it. So Stanley and I went to the door like we were going in too. Huck fell for it, as he's not the brightest bulb, and walked in while we turned around. What happened after that, I'm not sure, but he and they survived.

The doc called after both guys were done. Said Stanley had lost three pounds and Huck had gained them. Since they both get the same amount of exercise, I'm sure Stanley's loss is due to his cancer and Huck's gain is due to middle age.

But now everybody in the house is vaccinated and ready to party like it's 1999.