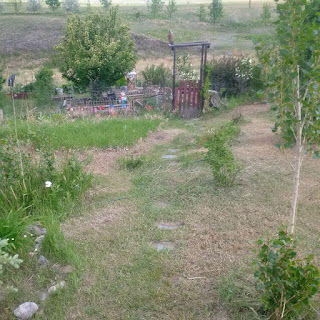 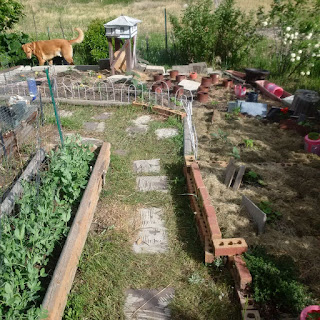 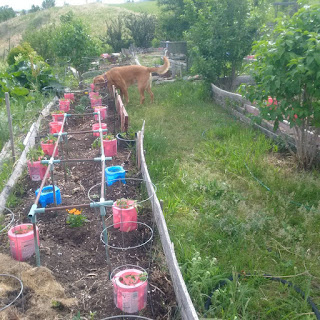 It's Sunday, dig it!

Junior's baseball season is done so my windshield time can be replaced by blogging time. The plan is to get into a regular routine. I'm going to shoot for some gardening stuff here every Sunday and some booky/doggy/linky stuff during the week. Time will tell.

I generally don't plant tomatoes and peppers until Memorial Day weekend, partly because it doesn't warm up until then. But this year my weekends were filling up fast so I gradually started planting two weeks ago. Most stuff just sits there until the ground gets warm enough - no harm no foul, as long as it doesn't freeze. The tomatoes (40 of them) seem to have taken off well though, while the peppers and eggplants took a pretty good beating from the wind and are going to need some TLC, though Lisa "Lefty Eye" Lopez isn't going to be much help.

A few years ago I started planting my tomatoes sideways. It seems odd at first, but that fall when I pulled up the plants it was obvious the root system was crazy better than the old way. The only thing you have to be careful of is while bending the plant so the last third of it sticks up without snapping it off. There's usually a victim or two in the bunch, but the needs of the many outweigh the needs of the few.

Also, I've always been the type to break off the suckers on the tomatoes, but this site says not to and seems to provide good reasoning, besides being lazy. Gonna give it a try this year as more than anything I'm trying to reduce susceptibility to disease.
Posted by Mark Haugen at Sunday, May 29, 2016 No comments: