I've been on a bit of a reading frenzy this 2020 and looks like that will continue as there's not a heck of a lot else going on to distract me. It would be nice if the writing bug bit me, but I'm a bit blocked at the moment so I'll keep turning the pages. I doubt I can keep up the book-a-week pace, but we'll see.

I won't give you a review of every book (you're welcome) but here's the list with their Haugenometer rating and a comment or two:

* "As The Crow Flies" by Craig Johnson, 6
* "Deep Freeze" by John Sandord, 7, a Virgil Flowers novel
* "Fear Nothing" by Dean Koontz, 8
* "The Flight Attendant" by Chris Bohjalian, 8, really enjoyed this one by a new author for me.
* "Stolen Prey" by John Sandford, 7+, a Lucas Davenport novel
* "Stick" by Elmore Leonard, 7
* "Dry Bones" by Craig Johnson, 6
* "Blackberry Juice" by Ralph Hamm, 5, a low rating but a thinker and worth a review down the road.
* "Suspect" by Robert Crais, 8+, great book, tear-jerker about a man and his dog, both with PTSD.
* "The New Girl" by Daniel Silva, 7, Silva is always good.
* "Victims" by Jonathan Kellerman, 7-
* "The Nigh Window" by Dean Koontz, 7+, the final in his 5-book Jane Hawk series, after faltering in books 2-4 it ended on a high note.

My friend and coworker of the last 14-plus years, and occasional contributor to this fine blog, Wes Roth, had his last day in the office on Friday as he begins a new career as a pastor. 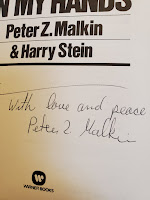 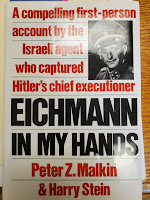 He presented everyone in the office (4 of us) with a personalized going-away gift.

Mine was an autographed copy of Peter Malkin's book, "Eichmann In My Hands." It was signed by the author, not Eichmann, as ol' Adolf was apparently busy in hell. It's called "a compelling first-person account by the Israeli agent who captured Hitler's chief executioner."

Wes and I share an affinity for the history of Israel, particularly the Mossad. So the gift was very much appreciated and moved to the top of my queue of books to read.
Posted by Mark Haugen at Sunday, March 15, 2020 No comments:

Why did God make music?

It strikes me as odd sometimes sitting in an audience listening to a musician or a band. It seems like a weird thing to do and made me wonder how music began and what is it's attraction and allure to us? 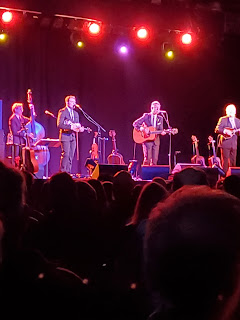 Did Eve just start humming one day and Adam started tapping along with his foot? While beating the drum to chase away predators, did Grog the Caveman just start spittin' out some lyrics to go with it? Then people started gathering around to stare at them?

Then it hit me last night at the Deadwood Mountain Grand. God invented music so he could hear Lyle Lovett sing. He and his Acoustic Band were awesome.

The band consists of  Luke Bulla @lukebulla on the fiddle; Jeff White @jeffwhitebluegrass on the guitar and mandolin (played many years with Vince Gill, Alison Krauss and The Chieftans); Viktor Krause @kraussviktor, brother of Alison Krauss, on bass; and Josh Swift @joshswiftmusic on the resophonic guitar. They are grand masters in their field. It's fun to hear such musicianship.

Bulla and White joined Lovett on several songs, putting together tight harmonies that entranced the packed audience of I'm guessing 1,000.

Lovett has such a unique voice and the sound set-up was perfect and allowed his voice to resonate perfectly. We could hear every word.

You'll never find Lovett playing at halftime of the Super Bowl because he doesn't jump up and down, shake his ass or climb a stripper pole. But if those acts were chosen on talent alone, he'd be at every one. He just stands there, plays his guitar and sings spectacularly.

And they do it with class. Lovett and the band were decked out in black suits and ties. He engaged the audience with stories of his east Texas childhood and got a particularly rousing cheer when he mentioned his love of motorcycles that began at the age of 11 and mentioned his desire to attend the Sturgis Rally. At that point, the Sturgis city council member I was sitting next to leaned over and said: "We should invite him to the Mayor's Ride!"

Like a good book, when a musician is great, I find myself zoned out, oblivious to those around me. It's like they are singing to me. His performance of "God Will" was mesmerizing.

They played for 2 hours and 15 minutes non-stop. Not a hiccup along the way. It was a pleasure to listen to some of the best musicians in the world, and a great singer, on top of their game and to see them do it with class, charisma and humor.

Other artists should take note.

** On a side note. A coworker of mine told me a couple months ago that she bought tickets. Leaving work the other day she said: "Maybe we'll run into you Friday night."

We did. Her seat ended up being right next to me. What are the odds of that?
Posted by Mark Haugen at Saturday, March 07, 2020 No comments: