I am friends with Mark Twain on Facebook (rumors of his death have been exaggerated) and today he excerpted a piece of his hilarious short story How I Edited an Ag Paper. Coincidentally, it's pretty much how I did it a few years back.

I tell you I have been in the editorial business going on fourteen years, and it is the first time I ever heard of a man's having to know anything in order to edit a newspaper.

You really should read it. It's one of my favorite Twain works, which is saying a lot.
Posted by Mark Haugen at Thursday, January 31, 2013 No comments:

I'm a couple days late to this because I've been busy cleaning up Basset Hound puppy pee (his name is Huckleberry). But the Sioux Falls Argus Leader had a couple nice stories on Sunday regarding the literary renaissance in South Dakota.

Along with that, they found it in their heart to include moi' in a story on the e-publishing aspect of S.D. literary-ness.

Among the words of wisdom regarding Joshua's Ladder and Zoo Falls, respectively:


“It sat around for quite some time, and I decided that I was tired of rereading it all the time,” says Haugen, who found a company that allowed him to upload the book and publish printed copies on demand. “I don’t plan on getting rich with this method, but I like writing, and it’s not too fun to write something and just have it sitting there.”
...
“I’m kind of impatient, and I don’t handle rejection well,” Haugen says. “If I did this the old way, I’d have to send out 100 manuscripts and letters, and years could go by without a publisher ever bidding on it.”
...
“The Internet has evened the playing field,” Haugen says. “Unless you have a diet book or you’re Snookie, it’s hard to get a publisher behind you. ... If I can make a name as a regional writer, I’ve found my niche.”

Posted by Mark Haugen at Wednesday, January 30, 2013 No comments:

I guess the New York Times is still around for the time being and published an interesting story on people using reviews on Amazon to sink a book. Granted the book is about Michael Jackson, and I don't think the world would be worse off if it missed another book on MJ's plastic surgery:


In “Untouchable: The Strange Life and Tragic Death of Michael Jackson,” Randall Sullivan writes that Jackson’s overuse of plastic surgery reduced his nose to little more than a pair of nostrils and that he died a virgin despite being married twice. These points in particular seem to infuriate the fans.

But it does show how perhaps the world could be deprived a good book just because a small group of Facebookers or Twitterers decide to go all Jack Reacher on its author.


The issue of attack reviews, though, has received little attention. The historian Orlando Figes was revealed in 2010 to be using Amazon to anonymously vilify his rivals and secretly praise himself. The crime writer R. J. Ellory was exposed for doing the same thing last fall.

Attack reviews are hard to police. It is difficult, if not impossible, to detect the difference between an authentic critical review and an author malevolently trying to bring down a colleague, or organized assaults by fans. Amazon’s extensive rules on reviewing offer little guidance on what is permissible in negative reviews and what is not.

Here's the story in full: A Casualty on the Battlefield of Amazon Partisan Reviews

Cold outside, notey inside

** How long will Barnes & Noble last? Some say not too long.

** Seems raising sons is turning into a theme this week.

** Ordered this for my poli-sci/history major daughter: The Fall of the Berlin Wall, by William F. Buckley Jr.

** Here’s a fascinating little window into the working habits of one our most brilliant and prolific artists. It’s from Robert B. Weide’s 2011 PBS film Woody Allen: A Documentary. In the scene above, Allen shows us the machine he has used for sixty years, the only typewriter he has ever owned: an early fifties manual Olympia SM-3. “I bought this when I was sixteen,” Allen says. “It still works like a tank.”


"I love criticism just so long as it's unqualified praise."

A few good men (not another Tom Cruise post)

Even if I get credit for nothing more than encouraging him to shower every couple days and to brush his teeth before bedtime, I'm pretty confident my 15-year-old boy is going to turn out okay.

The author of this piece, "Guns don't kill people - our sons do" in today's USA Today, is however worried in general about boys in our society and  making them into good, young men. Warren Farrell is author of Why Men Are the Way they Are. He is co-authoring a book with John Gray, titled Boys to Men. He notes, among other things:


For boys, the road to successful manhood has crumbled. In many boys' journey from a fatherless family to an almost all-female staff elementary school such as Sandy Hook, there is no constructive male role model.

Fortunately, my son is blessed with many constructive male role models, and in various ways every day I see how their maturity, manner and humor affect the way he carries himself.

There's my friend the forest ranger who has undertaken the role of his outdoor hunting guide and fisherman. My son doesn't just pay attention when he describes the subtleties of why the pheasants are most likely to fly up out of one direction over the other, but also picks up the more meaningful nuances of my friend: that he's on his church council, that he loves and respects his wife and daughter, that he has a soft spot for his dogs, and that one can speak softly and still command attention.

There's my boss, of whom my son can recite his favorite line regarding politics or sports: "Win with dignity, lose with grace."

There's the young priest who my son worships with, talks with and exchanges texts with on much deeper religious questions than I can offer an intelligent response to. He sees the devotion, the caring, and also the humor one can have while attending to the problems of others.

There's his uncle, a former Army Ranger, bronc rider and fireman. He sees in him a zest for life, a zeal for helping others, and a love of family and his boys.

While my son is not around each of these people every day, he is around one or more of them almost weekly. In the meantime, he also has a principal and  football coach he respects, male teachers he admires, friends' fathers who are good people, and good young role models from a nearby college we frequent.

I have noticed something else in my son, and it is that all of these people have helped him set a high bar for others who enter into his life. He has certain expectations of adults now, and when he runs across those who don't meet this standard, for whatever reason, he politely disregards them, and their words and actions don't carry much weight with him and later receive an eye-roll as he recounts to me the encounter. Already at his age, it seems he doesn't suffer fools lightly.

He is definitely blessed in ways some young men are not, through no fault of their own. If more young guys had even a fraction of the involvement of positive male role models he has, the world would be a better place. Perhaps Farrell's ideas are one way to attempt that.

I don't know what my son is going to be in the future. I'd say it ranges from FBI agent to priest, a pretty wide gamut. But whatever he becomes, he will be a good one because of all these fine men who will have helped make him a fine man.

As for me, frankly, all I need to do is stay out of the way, pat him on the back  ... and keep the refrigerator full.

Tom Cruise and I were both born on July 3. That means Cruise has more in common with me than he does with Jack Reacher. In the books, Reacher is 6-foot-5, 250 pounds and blonde. Cruise is 3-foot-8, 98 pounds and has red hair. So I didn't know how he was going to pull it off in the movie. But he did.

I was practically annoyed that Cruise was chosen for the part. It seemed almost obnoxious. My only sense that it might possibly, maybe, somehow work is that Jack Reacher author Lee Child seemed happy with it.  Of Cruise's relatively small stature, Child said, "With another actor you might get 100% of the height but only 90% of Reacher. With Tom, you'll get 100% of Reacher with 90% of the height."

And he did. I think it helped that they cast other vertically-challenged actors with Cruise, so his shortness wasn't obvious.

The movie did a good job of portraying Reacher. He was tough, had the photographic memory, and the good short quips. They didn't overdo the dialogue, which was good. They didn't quite get into the numbers thing as much with Reacher, where he practically does algebraic equations in his head, and he didn't get to sleep with the girl, like he usually does in the books. That was refreshing though, as I had my son and two nephews with me.

In the movie, Reacher is more the quiet tough-guy with the funny quip, where as in the books he is more bad-ass, sullen and alone.

As a book fan, I was relieved that they did a good job with the movie. 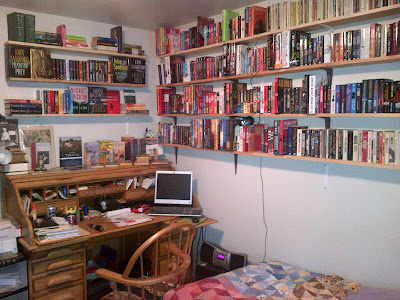 I sit here and do nothing a lot. My great uncle Oscar Wika built the roll-top desk. It's a work of art. Secret compartments and all that jazz.