A few random photos of the garden, which is looking great as long as the hail stays away. 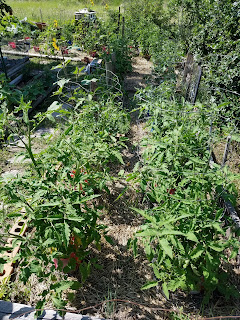 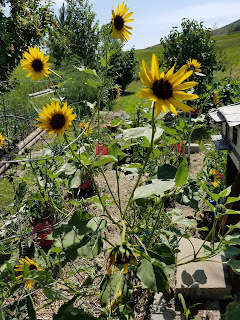 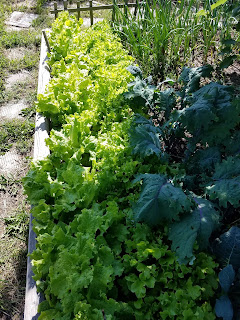 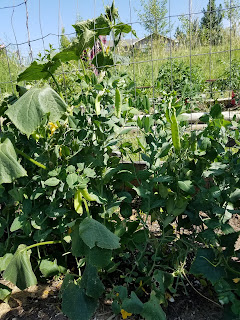 Cukes mixing it up with the snow peas. 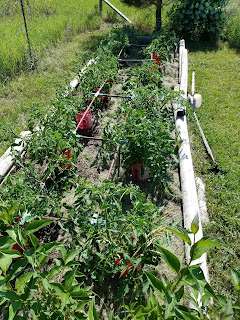 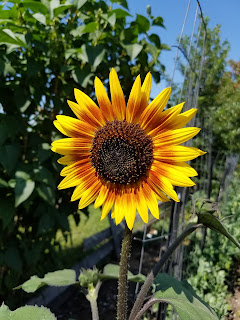 Another Sunflower, because I thought it was purty. 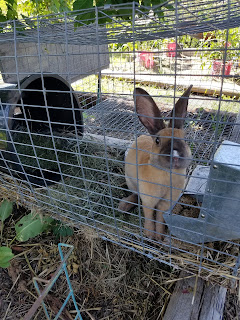 The guardian of the garden and taste-tester, Bosch.
Posted by Mark Haugen at Friday, June 29, 2018 No comments:

I took some random photos of things growing around our house (thank you 6 1/2 inches of rain this past two week). 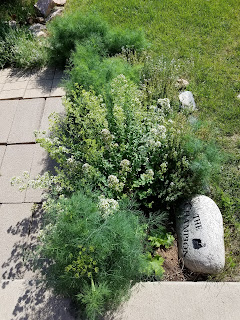 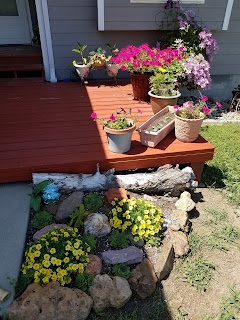 Front porch with succulents, petunias, eggplant, clematis, some luffa squash that aren't doing much in the rectangle container, and I forget what the yellow flowers are. 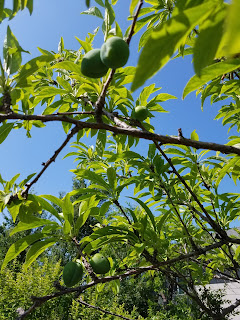 Plums from one of my five plum trees. 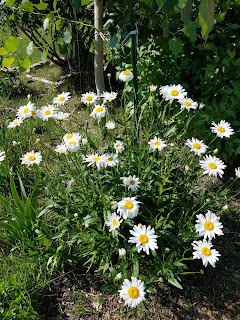 Daisies
Posted by Mark Haugen at Thursday, June 28, 2018 No comments:

Yep, ol' Half Pint has been deemed a racist by a bunch of biofocal-wearing purple-hairs at the American Library Association.


A division of the American Library Association has voted to remove the name of Laura Ingalls Wilder from a major children’s book award, over concerns about how the author portrayed African Americans and Native Americans.

The board of the Association for Library Service to Children (ALSC) made the unanimous decision to change the name on Saturday, at a meeting in New Orleans. The name of the prize was changed from the Laura Ingalls Wilder Medal to the Children’s Literature Legacy Award.

So by today's standards, some people's anyway, the Racist Writers Club now includes: Laura Ingalls Wilder, Mark Twain and Harper Lee. They are all dead, of course, so they can't defend themselves.

I'd pay money to hear Twain's response to these folks. Guessing Ingalls and Lee could've held their own too in rebutting the charges.

So I went back to back with John Sandford's second-newest entry into his Prey series, "Golden Prey," and Ted Bell's newest in the Alex Hawke series, "Overkill."

It was a good contrast in how the former continues to hum along with fresh ideas and character growth, while the latter, I'm disappointed to say, is coming precariously close to jumping the shark. (For those of you young'ns unfamiliar with the term, check this out. Sorry, Fonzie.)

I suppose the argument could be made that Lucas Davenport's antics, working at behest of a presidential candidate, could be a little far fetched also; but good grief this is book #27 in the series so I cut the guy some slack. Davenport as a character is maturing, aging, his relationships with his wife and kids are evolving. His character continues to grow.

This is only the 10th book in the Hawke series and he's chasing Vlad Putin around the globe in Goldfinger type mountains lairs in the Swiss Alps, with entire armies forming in two months, escaping in mini subs, etc. I know, the series has always been a little Bond-esque, but they've been rooted in current events. This seemed to stretch incredulity as the author tries to fit in a Trump-Russia theme, but fails. I felt the battle scenes were too long and the ending overdone and inconclusive.


Thanks to some very influential people whose lives he saved, Lucas is no longer working for the Minnesota Bureau of Criminal Apprehension, but for the U.S. Marshals Service, and with unusual scope. He gets to pick his own cases, whatever they are, wherever they lead him.

And where they’ve led him this time is into real trouble. A Biloxi, Mississippi, drug-cartel counting house gets robbed, and suitcases full of cash disappear, leaving behind five bodies, including that of a six-year-old girl. Davenport takes the case, which quickly spirals out of control, as cartel assassins, including a torturer known as the “Queen of home-improvement tools” compete with Davenport to find the Dixie Hicks shooters who knocked over the counting house. Things get ugly real fast, and neither the cartel killers nor the holdup men give a damn about whose lives Davenport might have saved; to them, he’s just another large target.


On a ski vacation in the Swiss Alps high above St. Moritz, Alex Hawke and his young son, Alexei, are thrust into danger when the tram carrying them to the top of the mountain bursts into flame, separating the two. Before he can reach Alexei, the boy is snatched from the burning cable car by unknown assailants in a helicopter.

Meanwhile, high above the skies of France, Vladimir Putin is aboard his presidential jet after escaping a bloodless coup in the Kremlin. When two flight attendants collapse and slip into unconsciousness, the Russian leader realizes the danger isn’t over. Killing the pilots, he grabs a parachute, steps out of the plane . . . and disappears.

Hawke has led his share of dangerous assignments, but none with stakes this high. To save his son, he summons his trusted colleagues, Chief Inspector of Scotland Yard Ambrose Congreve, former U.S. Navy SEAL Stokley Jones, Jr., and recruits a crack Hostage Rescue Team—a group of elite soldiers of fortune known as "Thunder & Lighting." Before they can devise a rescue plan, Hawke must figure out who took his boy—and why. An operative who has fought antagonists around the globe, Hawke has made many enemies; one in particular may hold the key to finding Alexei before it’s too late.

But an unexpected threat complicates their mission. Making his way to "Falcon’s Lair," the former Nazi complex created for Hitler, Putin is amassing an impressive armory that he intends to use for his triumphant return to Moscow.

Overkill wasn't a deal killer for me on the series. Just hoping Bell steps it up a little on the next one.

Sandford, on the other hand, can't write more novels fast enough for my taste.

So, what ya reading?

I'm always interested in what people are reading, especially my kids, as it's something I really tried to instill in them.

So I noticed this week that my oldest daughter, 26, was reading what looked to be kind of an odd one and caught my eye: The Soul of an Octopus. I'd never heard of it (which is not surprising), but apparently it's been on some nonfiction best-seller lists. It was borrowed to her by a friend/local state legislative candidate, who as a friend said: "That is a great legislator that hands out books."

It probably won't end up on my TBR list, but that's okay.

I didn't notice what my other daughter, 22, is reading but have been enjoying her blog, where she offers insights into her first year of teaching 7th grade science in Illinois.

Her husband, who is pursuing a PhD in history at U of I, is the most voracious reader I know. He's seldom without book in hand.

His stack on my dining room table was: The Search for Order 1877-1920; The Rights of Indians and Tribes, The Short and Tragic Life of Robert Peace; and The Plains Political Tradition, Essays on South Dakota Political Culture (co-written by my co-worker Jon Lauck).

Then there's my 20-year-old son, who is working for a DoD agency this summer near DC. He is on his second reading of Ted Kaczynski's "The Unabomber Manifesto."

So we run quite the gamut in the Haugen house.As for me, I just finished John Sandford's latest entry to the Prey series, Golden Prey.
Posted by Mark Haugen at Sunday, June 17, 2018 No comments:

Dying for a good ending

If you're a fan of Charles Krauthammer, you know that he's been battling cancer and admittedly says he doesn't have long to live.

He's a national treasure and I really enjoy his columns, his television appearances, and his book, "Things That Matter: Three Decades of Passions, Pastimes and Politics".

I had to chuckle today at this anecdote about Charles as told by author/columnist Marc Thiessen:


A few years ago, I was talking with Charles Krauthammer in the Fox News green room when the news that someone famous had passed away flashed on the television screen. Charles told me the way he hoped to go when his time came. His dream, he said, was to be assassinated during the seventh-inning stretch at a game at Nationals Park. He wanted to die in what he once called “my own private paradise,” where “the twilight’s gleaming, the popcorn’s popping, the kids’re romping and everyone’s happy.”

I have the same kind of wish but not as specific. I told a friend a couple years ago that when I die I want it to be front-page news. Not because I'm famous or anything, but I want it to be exciting. I'd settle for odd.

I really don't want to go in my sleep or via heart attack or cancer. That's so pedestrian. I want, like Charles, something people will talk about, laugh about, or respond with an "uff da."

Like: A victim of a bank robbery gone wrong, a hostage situation or a mountain lion jumping out of a tree. A buffalo pushing my car over a cliff. The stranger the better.

I remember a few years ago during the Sturgis Rally, a guy was killed on his motorcycle when a portable toilet fell off a truck in front of him. I'm sure that's not the way he wanted to go and it's unfortunate. But now he's got a story to tell in Heaven.

And as I've said before, life is all about the stories you can tell ... even in death.
Posted by Mark Haugen at Friday, June 15, 2018 No comments:

I didn't know what I was getting into when I picked up this Elmore Leonard novel off the bargain rack at the Wall Drug Bookstore.

Leonard is best known for his crime fiction and thrillers (think "Get Shorty") but actually began his career with Westerns. This is one of those, written in 1959. It was fantastic. As I've come to read, his Westerns are among the best in the genre (think "3:10 to Yuma). 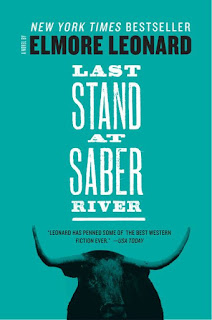 This, his fourth novel, was turned into a movie starring Tom Selleck.

Amazon sums up Last Stand at Saber River this way:


A quiet haunted man, Paul Cable walked away from a lost cause hoping to pick up where he left off. But things have changed in Arizona since he first rode out to go fight for the Confederacy. Two brothers—Union men—have claimed his spread and they're not about to give it back, leaving Cable and his family no place to settle in peace. It seems this war is not yet over for Paul Cable. But no one's going to take away his land and his future—not with their laws, their lies, or their guns.