I guess it's that time of year for annoying lists. Allow me to annoy you with my Top 10 list of 2012, without even a mention of the Vikings' victory over the Packers yesterday:

#10 – I bounced back from a sub-par 2011 running season, in which rumors emerged that I was over the hill. Seems reports of my death were exaggerated as I turned in faster times in the Hot Springs Firecracker 10K and the Heart of the Hills 10-miler.

#9 – Bought new basset hound puppy Huckleberry. He became Chester for one day, then back to Huck, which has stuck.

#8 – Had my best tomato crop since moving West River, proving that it ain’t a drought if your garden hose is long enough.

#7 – Went on father-son camping trip to Boulder River in Montana, accompanied by the life of our household, golden-lab Stanley.

#6 – Wifey was named full-time director of the SD School of Mines Newman Center and they broke ground on a multi-million-dollar church across the street from campus.

#5 - The State of South Dakota, in all its wisdom, saw fit to give a driver’s license to my 15-year-old son, Luke; and then me, in all my wisdom, bought a 1997 four-wheel-drive pickup for said kid.

#4 – Same kid turned in a good year in sports: Three dingers in baseball; undefeated basketball season, went out for football for first time, and was track conference champ in 300 hurdles and couple relays.

#3 – Beloved mini-wiener dog Ella died.  She taught me a valuable lesson: If you want people to leave you alone, pee whenever somebody tries to touch you.

#1 – Oldest daughter Katie got engaged to long-time boyfriend Jeff, who heeded my advice a couple years ago that: “Slow and steady wins the race.” He wins a beautiful, intelligent, independent-thinking 21-year-old girl. Good luck with that!
Posted by Mark Haugen at Monday, December 31, 2012 No comments:

Looks like I have a busy winter ahead of me. 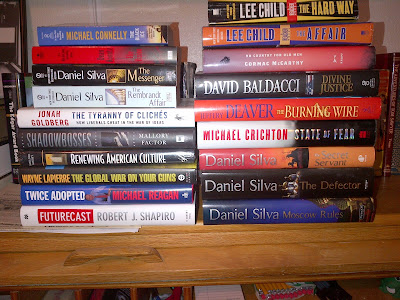 Posted by Mark Haugen at Saturday, December 01, 2012 No comments: