A few days of 100-plus heat held the garden back a bit, but it survived. A half inch of rain last night rejuvinated things. As the man who jumped off the 10-story building was heard saying at each floor: "So far, so good."

Have picked some cukes and zukes and beans. A half dozen tomatoes had blossom end rot that I attacked with some calcium chloride spray (Rot Stop) and it's now looking like it could be a banner season in the Haugen household. I have some monster green peppers and my novelty plants of the year, the Red Peter peppers, are loaded. Along with several jalapeno and Habenaro peppers, I may spend all winter in the bathroom.

Here's a peek at some naked tomatoes. 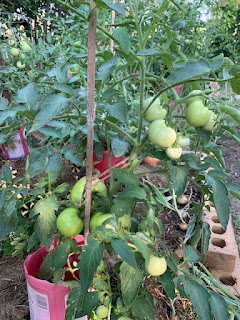 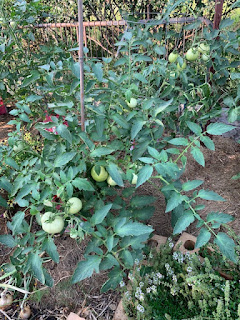 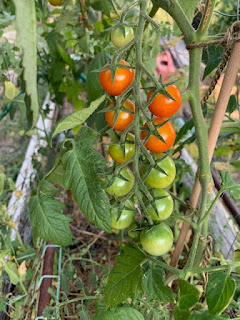 Finished: 'The Wife Between Us'

"The Wife Between Us," by Greer Hendricks and Sarah Pekkanen, was a slow starter but finished okay. I almost quit halfway through but trudged on, probably for the best because I want to save quitting for the absolute worst books.

It's certainly a good reminder that blurbs from reviews can be misleading, like:

"Buckle up, because you won't be able to put this one down." ―Glamour

It's basically an ex-wife stalking her ex-husband's new fiance with some twists thrown in.

One anonymous 1-star review wrote, and I agree: "It just drags, the authors felt compelled to provide minute details on every activity, place, object, and thought."

It's kind of the opposite of how I write. I should probably be more detailed and descriptive. It would help turn those novellas into novels. But I don't like my books to drag, sometimes to the detriment of the reader not knowing what each character had for breakfast and what they were wearing while doing so. So be it.

I didn't realize how far behind I'd fallen in logging my books. Life comes at you fast in the summertime. I also read in June and July:

** Hit and Run by Lawrence Block. 6. This was book four of five in the Keller series.

** Forever by Jeffery Deaver. 7. Mystery author extraordinaire Ed McBain pulled together some of his buddies to write novellas for a series called "Transgressions." This is one of them.

Talbot Simms is an unusual cop. He's a statistician with the Westbrook County Sheriff's Department. When wealthy county resident's begin killing themselves one after another, Simms begins to believe that there is something more at play. And what he discovers will change his life . . . forever.

** Make Out with Murder by Block. 6. This was one of the better ones from the Chip Harrison series.

The streetwise gumshoe is Chip Harrison, who has finally secured himself a job, acting as the man-about-town for the corpulent detective Leo Haig. And it's on the dangerous streets of New York that Chip brings home his first case, one in which five beautiful sisters are being systematically murdered by a killer with a diabolical design.

** The Vengeful Virgin by Gil Brewer. 8. This was from the Hard Case Crime imprint. I enjoy the books they publish.

Her wealthy stepfather was dying - but not quickly enough. What beautiful 18-year-old would want to spend her life taking care of an invalid? Not Shirley Angela. But that’s the life she was trapped in – until she met Jack.

Now Shirley and Jack have a plan to put the old man out of his misery and walk away with a suitcase full of cash. But there’s nothing like money to come between lovers – money, and other women…