Been a while. What can I say, I've been busy watching all the movies nominated for Academy Awards. Just kidding, haven't seen a one.

** Whassup with this Omaha mayor? Op-ed from OWH.

** Speaking of snow, House Speaker Paul Ryan put up a snowcam from the Speaker's balcony with some sweet bumper music.

** I'm just going to throw this out there without comment: Why can't we find aliens? Because climate change killed them, of course.


ESPN is hemorrhaging subscribers and money. In a November regulatory filing, the network revealed that it has lost seven million subscribers over the past two years. While every popular TV channel has lost subscribers, the losses for ESPN and ESPN2 are among of the highest in the industry — and the most costly.

Before we get too far into the new year, I wanted to mention the best book I read in 2015. It is also one of the best books I've ever read.

Life Expectancy is a 2004 novel by Dean Koontz. I read it last month and savored every page. Koontz is a genius. Most authors would be lucky to have as many twists and turns in an entire novel as DK has in each chapter. It hits practically every emotion.

I was enthralled by it. Thought about it during the day, anxious to get home to read it, but not so fast that I finished it too quickly. Wanted to savor it.

Goodreaders give it a high 4 out of 5, while the Haugometer hit 9 of 10. Here's the Goodreads summary. Makes me want to read it again.


Jimmy Tock comes into the world on the very night his grandfather leaves it. As a violent storm rages outside the hospital, Rudy Tock spends long hours walking the corridors between the expectant fathers' waiting room and his dying father's bedside. 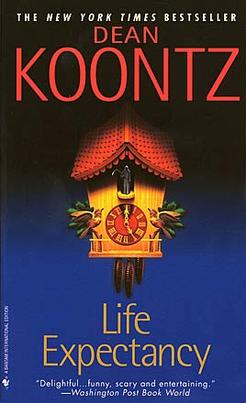 It's a strange vigil made all the stranger when, at the very height of the storm's fury, Josef Tock suddenly sits up in bed and speaks coherently for the first and last time since his stroke.

What he says before he dies is that there will be five dark days in the life of his grandson—five dates whose terrible events Jimmy will have to prepare himself to face. The first is to occur in his twentieth year; the second in his twent-third year; the third in his twenty-eighth; the fourth in his twenty-ninth; the fifth in his thirtieth.

Rudy is all too ready to discount his father's last words as a dying man's delusional rambling. But then he discovers that Josef also predicted the time of his grandson's birth to the minute, as well as his exact height and weight, and the fact that Jimmy would be born with syndactyly—the unexplained anomal of fused digits—on his left foot. Suddenly the old man's predictions take on a chilling significance.

What terrifying events await Jimmy on these five dark days?

It will have you on the edge of your seat in suspense, then when that subsides you will fall off your seat laughing at another sequence. This book is utter brilliance.

One of the more thought-provoking quotes from the book was:


“We need to laugh at the irrationality of evil, for in doing so we deny evil's power over us, diminish its influence in the world, and tarnish the allure it has for some people.”

I think there's a lot of validity to that. Not that they are evil people, but I think of the Bundy dudes who took over a vacant building in Oregon to protest. There aren't even any cops there fighting with them. It's like if you threw a party and nobody came; they threw an insurrection and government was like "okay, have the building. Oh, and by the way, we're cutting off your power."

I think Koontz is saying if we don't get so wrapped up with, enamored with, afraid of and obsessive over evil, it won't have as much power over us. When evil throws a party, do Jell-O shots with it.

Koontz is big on personal responsibility:


“As they have taught me, I believe that without asking, we are given all we need. We must have the wit and wisdom to recognize the strengths and tools at our command, and find the courage to do what must be done.”

And good versus evil:


“The stakes were suddenly so high that we wanted out of the game. When you’re playing poker with the devil, however, no one leaves the table before he does.”