Burglar on the shelf

After I finish reading Chris Bohjalian's "The Double Blind," I'm going to knock off some burglaries. 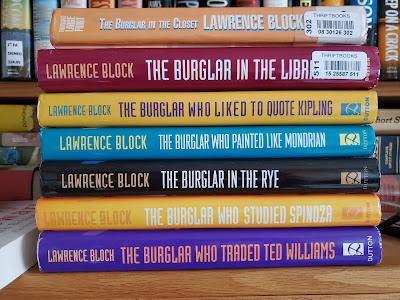 Posted by Mark Haugen at Saturday, October 31, 2020 No comments:

I recently finished Robert Crais' "The Two Minute Rule." It was okay, but not a knockout.

I've read a couple others by Crais and they're kind of in the same boat, okay but nothing to write home about. He's most famous for his Elvis Cole and Joe Pike series. This was not one of those.

The two minute rule refers to the amount of time bank robbers believe they have inside a bank before the coppers arrive. In this one, the main character is recently released from prison (for bank robbery) and on the day of his release learns that his police officer son (who he's never met) was murdered. So he goes about trying to find the killer amid speculation that his kid was a dirty cop. So he wants to find the killer and hopefully clear his son's name to disprove the adage: Like father, like son.

I gave it a 7 on the Haugenometer.

Previously, I read a John Wayne bio. It was good enough that I bought the Jimmy Stewart bio written by the same author Michael Munn. As mentioned before, I don't rate biographies or historical books because they're basically glorified term papers. Congrats on the research skills, but little in regard to imagination.

And before that I read "Devoted" by Dean Koontz. If you like dogs, and I do, you'll like this one. I gave it an 8.

Now I've moved on to a collection of Lawrence Block short stories about my favorite assassin Keller.

I also compiled my Christmas list, if anybody is interested. It's quite the month as four of my favorite authors have new releases in October: Koontz, John Sandford, Lee Child (with brother) and Ted Bell.

Posted by Mark Haugen at Saturday, October 24, 2020 No comments:

Living with your mistakes

I wish somebody had told me that when I decided to become a Minnesota Vikings fan. Trouble is I don’t know that I ever made that conscious decision and don’t know how it happened. I’m guessing I started young, well before I had a fully developed brain; because I never would’ve chosen them now. 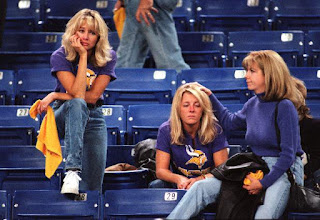 I was born into a mixed marriage – my dad a Bears fan and my mom a Vikings fan. There wasn’t any peer pressure either way. I’m guessing I was just like any other son and naturally went with my mom to antagonize my dad.

It could’ve been also because the Vikings games were always televised locally, so I watched them most. We went to Mankato to see their training camp a few times. Or maybe it's because of my Norwegian heritage and it was just a genetic thing.

But here I am 50 years later, having suffered through Drew Pearson pushing off, Super Bowl losses, more crucial missed field goals than a person should endure, and just flat-out chokes and awful performances. The thing is, I don’t know why I even care. It’s so stupid. Yet I do.

I’ll probably never see a Vikings Super Bowl title. I’m resigned to that. The only thing I could do is to renounce them and declare my allegiance to another team. Then, you know they’d win the Super Bowl the next year. I should do that for all other Viking fans. Take one for the team. But I’m not a band-wagoner.

I’m going to sit on my recliner every Sunday for three hours, enjoy a Minneapolis Miracle type moment every decade or so, but mostly just take my shots like all those bum heavyweights who got thrown in against Muhammad Ali at the end of his career. Thank you, sir, may I have another?

Posted by Mark Haugen at Wednesday, October 21, 2020 No comments:

Some notes, quotes and anecdotes:

*** Wifey and I are watching the Netflix series "Fauda." It's very good - kind of an Israeli "24." Fauda, which means "chaos" in Arabic, was developed by Avi Issacharoff and Lior Raz, based on their real-life experiences in the Israel Defense Forces.

A friend of mine originally from Jordan told me it was unfortunately very realistic. So as the first season was winding down (there are 3) I texted him a question regarding a plot twist between two of the Palestinian characters: "Do cousins marry cousins often in the Arab world or is it just in this show?"

He replied with his usual wisdom and wit: "They do. The religion discourages the practice, but the culture embraces it. Two of my sisters are married to their first cousins. I am not."

He's married to a blonde from Nebraska.

*** I don’t know if you read Jason Whitlock or not, but he’s always instigating something and is often awesome. Column today on The Black Trump rips into LeBron James:

*** Writer Joseph Epstein has a fun essay about fame. Do I have it? Do I need it?

I also like to think I have passed beyond the fantasy stage in regard to my own writing. When I publish a book, I hope it will sell enough copies to repay my publisher and please my modest number of regular readers (7–8,000 or so). I am pleased by enthusiastic reviews but no longer crushed (ticked maybe, but not crushed) by damning ones. I have ceased accepting occasional offers to do interviews or appear on talk-radio shows. As for offers to give lectures, I set a high fee ($10,000) and write to the people, not all that many, who have made the offer that they are not to worry if they cannot meet it, for I have heard these talks myself and assure them they are worth nowhere near $10,000.

Slavina had written on social media on Thursday that police and federal guards burst into her flat in an early morning raid. She said they were searching for evidence of links to Open Russia, an opposition movement funded by Kremlin critic Mikhail Khodorkovsky that has been ruled undesirable by the authorities, amid allegations that it funded protests in the city.

“I don’t have anything,” said the journalist, adding that police confiscated her notebooks and computer as well as laptops and phones belonging to her and her husband and daughter.

“I have no means of production,” she said.

She set herself on fire in front of police headquarters.

It’s easy to judge such a person, negatively, but most of us have no idea what it’s like to be in her shoes. You may remember what Mohamed Bouazizi said, before setting himself on fire. (He was the fruit vendor in Tunisia, whose death in 2011 set off the Arab Spring.) “How do you expect me to make a living?”

When I hear about people such as Irina Slavina, I also think, “What do we journalists risk here in the Free World? Mean tweets? Nasty ‘comments’? Maybe we don’t get that cable ‘hit’ at 3:11 in the afternoon?” We are so very lucky.

*** This is a very interesting article at RealClearEducation: The Awful Economic Impact of School Closings

The average U.S. K-12 student affected by COVID-19 school closures has a learning loss of one-third to over half a year of schooling. Assuming a one-third year learning loss, the report authors estimate that on average today’s students can expect at least 3% lower lifetime earnings. Longer learning loss makes matters worse. The situation is more severe for students from disadvantaged households.

*** This writer reviews Joseph Bottum's book "The Decline of the Novel."

O Novel, Where Art Thou?

For the most part, between every pitch, announcers argue over and try to predict what kind of pitch the pitcher will throw next. "He could go high and inside with a fastball or he could go down and away with a slider. I'd go with the slider." The pitcher throws a curveball. And so it goes 200 times a game.

I know they feel they have to fill the void between between pitches with noise. They are paid to talk, after all. But it gets old. All they have to do is wait 20 seconds and we'll see what kind of pitch it is. I get doing it once in a while in high-intensity moments, but not all game long. So annoying.

Same with political pundits and polls. We are in the thick of it now. The NBC poll says this, the Marist poll that, the Rasmussen poll says otherwise. And they argue about the make-up of the polls, registered voters or likely voters, plus and minus advantages between political parties, and expectations of how many from various groups will vote.

Other than to the candidates' campaigns (who have their own polls anyway), as they develop messaging and where to target spending, it doesn't matter. It's just hot air. Because, you know what? In a month we'll know the answer. We'll know who was right, who was wrong.

I get it. Politics is like sports to me too. I like watching the strategies employed. Oftentimes have a preferred team and sometimes not. But this poll thing gets beat to death. Give it a break.

Patience is not an American virtue. But if we wait long enough, we'll have our answers.