LOVED this book!!, June 23, 2011
By WGR
Amazon Verified Purchase
This review is from: Joshua's Ladder (Paperback)

I am a voracious reader, mostly of non-fiction (politics, current events and history) along with Christian-based books. A friend recommended Jacob's Ladder and I'm so glad they did. I really enjoyed getting to know Joshua and his life story, staring in South Dakota, then to Cocoa Beach and back. The characters in the book are unique and the author really makes them come alive. If you are from the Midwest, there is going to be a lot to recognize in the story. There are surprise twists throughout the book, which are actually two stories (Joshua's Ladder and Amy's Ladder). A couple shocking developments made me hunger for more. I would HIGHLY recommend this book to everyone and I look forward to more of Mr. Haugen's writings in the future. A wonderful book!

P.J. O’Rourke offers his thoughts in this column “Irish Setter Dad.” (You have to sign in, but it's free.) Here's a snippet:

"My kids fit the success profile. I’ll bet Muffin and Poppet are accepted at the University of Idaho, assuming Wii is a Title IX thing. And Buster will be waving goodbye to Harvard while he’s still in junior high.

Amy Chua, I’ve got bad news. “A” students work for “B” students. Or not even. A businessman friend of mine corrected me. “No, P. J.,” he said, “ ‘B’ students work for ‘C’ students. ‘A’ students teach.” Teaching in the Ivy League gives you a lot of time off, Amy—enough to write a crap book, worse than Yale prof Erich Segal’s Love Story. Maybe when you get some time off again you should come to rural New Hampshire and meet the Irish Setter Dad children.

Buster, age 7, is a master of passive resistance who can turn staying up past his bedtime into Tahrir Square. He could hire himself out as a civil disobedience coach to Mahatma -Gandhi and Martin Luther King, if they weren’t dead. Poppet, 10, is a persuasive saleswoman, not to say charming con artist, who can hand you a sheet of black construction paper with a hole in it and convince you it’s a science project on collapsed super-novas. And Muffin, 13, has her own .410 shotgun and knows how to use it.

Try your Chinese Tiger Mom stuff on my kids."

In my mind, O’Rourke has managed an incredible career by appealing to the diverse audiences of The Atlantic Monthly, The American Spectator and The Weekly Standard, as well as viewers of Bill Maher and listeners of NPR. Author of 16 books, he is considered the most quoted living man. Don’t doubt me, Wikipedia says so!

In a 2008 LA Times column, O’Rourke shares his take on mortality, after learning that he had:

“of all the inglorious things, a malignant hemorrhoid. What color bracelet does one wear for that? And where does one wear it? And what slogan is apropos? Perhaps that slogan can be sewn in needlepoint around the ruffle on a cover for my embarrassing little doughnut buttocks pillow.”

Okay, I'm going to start stepping it up here. Lately I've been busy, distracted and generally unmotivated. But that's about to change. So let's go to the mail bag with questions and comments from actual people who actually interact with me via email, Facebook, phone or at baseball games.

From a guy with too much time on his hands in Faith, SD: "Finished reading Joshua's Ladder this weekend (family travel - so it was also the first book I read on my phone). I'm ready for the next rung on the Ladder! I hope his next love interest has a less hazardous occupation :-) It was great! Good Job!"

My first thought is of my grandpa Clayton Renli and what he would think if I were to flash back 40 years and say to him: "Hey, Grandpa, I just read a book on my phone." He'd probably ask: "Mark, have you been drinking out of the cattle tank again?"

I still remember Grandpa and Grandma's party line phone and the two rings that were theirs. Sometimes I would "accidently" pick up the phone on other rings and listen to others talk until somebody said: "Hey! Is there somebody else on the line?" Then I'd hang up, though I think the guy from NSA stayed on. That was probably the first evidence to suggest I might someday become a nosey journalist.

Yes, those in-laws are easily confused. Here's a publishing update on all things Haugenish. I'm typing slowly so everybody will understand.

Joshua's Ladder ebook - Is available for every kind of ereader known to mankind. You can access them all at smashwords.com (even a Kindle version) but if you are a hard-core Kindle user and cling to your Amazon website like your first teen love, it is also now available at amazon.com. Seems originally Smashwords thought it was close to cutting a deal with Amazon to have their books distributed there, but it fell through. But that doesn't affect you now. All is good.

Amy's Ladder ebook - This is the sequel to Joshua's Ladder. It's been finished for a couple years and I was going to publish it later this year but changed my mind. Two reasons: 1, a few sad-sack weepy readers were so angst-ridden over the ending of JL that I thought I better get AL published for their own mental well-being (compassion is my middle name); 2, see below.

Joshua's Ladder paperback version - The paperback version also contains Amy's Ladder. This will appease the previously mentioned issue of distraught readers and basically gives you old-fashioned book readers a two-fer. This is available at amazon.com for a very reasonable price of $14.95, if I say so myself. You can also ask your favorite brick and mortar bookstore to order it for you, and then when enough people ask they will catch a clue and just stock the dang book. It will also soon be available at the world famous Wall Drug bookstore and some other elite sales outlets across the Rushmore State.

And, lastly, from a Haugen groupie/reader from Rapid City, SD: "Reading this on my vacation in England. Well, when I'm not at the pubs. Loving it so far!"

Keep on drinking, baby. It gets better with every sip.
Posted by Mark Haugen at Tuesday, June 14, 2011 No comments: 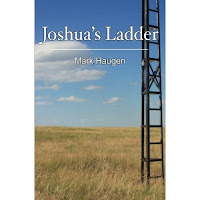 I have it on good authority that if Oprah hadn't retired last month, Joshua's Ladder was next on her Oprah Book Club. Such is my luck.

Sooooo, we'll have to settle for announcing it on this blog. Joshua's Ladder is now available in paperback! At the low, low price of just $14.95.

CHECK IT OUT HERE.

The paperback version is extra good because it combine's Joshua's Ladder and the sequel, Amy's Ladder, all into one easy to read book. As e-books, those two were, at least for the last two days, the top sellers at independent book publisher Smashwords.com (and you can also get my Hitchhiker short stories there for free).

It's really worked out quite well as I've had over 1,500 downloads of the e-books and now the paperback version is out on their heels.
Posted by Mark Haugen at Thursday, June 02, 2011 No comments: