Finished one of Lawrence Block's earliest books "Cinderella Sims." It's actually a 2003 reprint of the novel he published in 1958. It was originally titled "$20 Lust." 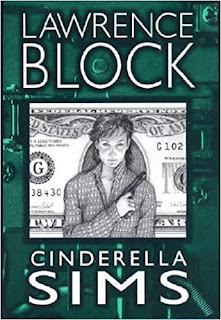 It's a splendid look at how he progressed in his career. It's a bit amateurish. You can tell he was turning out several books a year at the time, most destined for the smut publishers at the time, but some for more mainstream press when he felt the novel was worthy. According to the forward written by a friend, this was kind of in between. But you see glimpses of what would become greatness.

It's a first edition I bought on E-Bay, but it's from a library. So it has all the stickers and library card holder. I try to clean those up and take all that stuff off but they apparently used glue back in those days that could hold automobiles together. Try as I might with my limited patience and a razor, and gunk remover, it just ends up looking like a depressed old library book that tried to slit its wrists.

But, the book was interesting, especially if you're into Block and his career. It featured a man's quest to become a weekly newspaper owner, so that was nice. I gave it a sympathetic 5 of 10 on the Haugenometer.

According to Amazon: "After Louisville Times reporter Ted Lindsay loses his wife--first to another man, then to a car accident--he relocates to New York, where he meets Cinderella Jones, who is on the run from a gang that she stole fifty thousand dollars from."

This is a better description from Publishers Weekly: "Originally titled $20 Lust and published under the pseudonym Andrew Shaw by Nightstand in 1961, this early Block novel has its quirky charms. As the MWA Grandmaster explains in the Lawrence Block Bibliography: 1958¤1993, "much of the work in question was bad, and categorically so... in the early sixties I wrote a soft core sex novel every month, designed to titillate but not to inflame, with a requisite sex scene in every chapter." Strip away the requisite sex scenes and one is left with a dark, clever crime story that shows Block's emerging strengths: good storytelling, a bright sense of humor and more than a few flashes of good writing. Ted Lindsay, a reporter for the Louisville Times, loses his wife to another man, then to a fatal accident. He relocates to New York in order to get a new start. He's unsuccessful until he sees "the girl." The girl turns Ted's life upside down, setting him on a path of treacherous lies, deceptions and dangers as they try to outwit the gang that's after her. The sex scenes, mild by today's more graphic standards, are more likely to amuse than titillate. Readers who have not yet discovered the joys of Block - bookseller/thief Bernie Rhodenbarr, PI Matthew Scudder, hitman John Keller, etc. - should skip this one. But established Block fans should enjoy this peek at the author's obscure apprentice work and be grateful that he moved on to create better books."