It was about time for a break from my murder, mystery and mayhem reading and delve into a biography. So, on a whim, I tossed Brandi Carlile's "Broken Horses" into the Amazon cart. 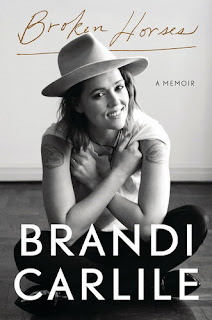 Not really sure why. I'm not a particular fan of hers, had barely heard of her and couldn't sing you a song by her and you wouldn't want me to if I could. But I'd heard Shooter Jennings drop her name. I knew she produced Tanya Tucker's album with him. The book description seemed interesting, so I figured: What the heck?

She seemed kind of young (40) to be writing a memoir, especially considering she's not exactly a household name. But it was an interesting read. She's very introspective, admitted overly so, as many artistic types are. Her writing shows she's very aware of her faults and demons and she does a good job of making you feel like you're walking in her shoes.

Having not listened to her music before, I had Alexa play her music while I read her book. That was a new experience and made it more special. She describes her music as Americana, kind of folky, not really country, though she runs with that crowd. It's kind of Joni Mitchell meets Norah Jones. It's not my kind of music but my wife enjoys her now.

She tells some interesting stories having grown up dirt poor in a substance-abusing family. Moved around a lot and had a lot of oddball characters in her life. She is lesbian and it's a theme that is understandably key in her life and growing up. She talks about showing up at her baptism in the Baptist church and being turned away because she didn't answer the "homosexuality" question the way they wanted, which was supposed to have been: "No, I'm not."

Carlile became close with Elton John and the Obamas, and is/was a big fan-girl of Barrack and family.

I particularly enjoyed the chapter she wrote describing the feelings of finally winning a Grammy award. It made me feel happy for her. She definitely had her struggles and battled through them to get to the point where she is now - selling out Madison Square Garden.

If a memoir is written to make people understand the writer, to empathize with them, to make you really feel like they let you inside their life and thoughts, then Brandi Carlile certainly did that. I enjoyed learning more about her. While I probably won't be playing her music much, I will certainly continue to follow her career and life and wish nothing but the best for her.

October was a good month for reading.

** Finished "Lethal Agent" by Kyle Mills, who has taken over the Mitch Rapp series for the deceased author/creator Vince Flynn. This is No. 18 in the series. I liked it a lot. 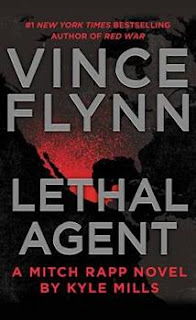 There's bioweapons, terrorists, drug cartels, lots of killing, and Rapp, the rogue CIA operative. All the things that make for a good, bloody thriller.

A couple quotes that caught my eye:

Mitch Rapp: "And the American people ... they faint if someone uses insensitive language in their presence and half of them couldn't run up a set of stairs if you put a gun to their heads. What'll happen if the real shit hits the fan? What are they going to do if they're faced with something that can't be fixed by a Facebook petition?"

Stan Hurley: "It's not how you play the game, it's whether or not your opponent ends up dismembered in the woods."

** Finished the 1966 novel "The Busy Body" by Donald Westlake. It's a story of a mobster charged with digging up a dead body because the suitcoat the dude is buried in is lined with packages of cocaine. As is usual with Westlake novels, nothing goes right. In this case, the casket is empty.

** Knocked off the third in the Joe Pickett series by C.J. Box - "Winterkill." Another good one by him.

It's an hour away from darkness, a bitter winter storm is raging, and Joe Pickett is deep in the forest edging Battle Mountain, shotgun in his left hand, his truck's detached steering wheel handcuffed to his right—and Lamar Gardiner's arrow-riddled corpse splayed against the tree in front of him. Lamar's murder and the sudden onslaught of the snowstorm warn: Get off the mountain. But Joe knows this episode is far from over. And when his own daughter gets caught up in his hunt for the killer, Joe will stop at nothing to get her back...

The ending is not what you normally get in a novel, though I've gone there before.

** Wrapped up the month with "Deadly Cross" by James Patterson. I don't read any of the co-authored books of Patterson. There are too many of them and some are probably good but I don't have the time to be messing with wannabes.

This is the 28th book in the Alex Cross series. It interweaves two cases of Alex's and his wife. The Cross books are always good. This wasn't the best, but glad I read it.

** Next up, I'm changing my murdery tune and cleansing the pallet with a memoir by Brandi Carlile. She intrigues me and I'll let you know how it goes.

Posted by Mark Haugen at Saturday, October 30, 2021 No comments:

Seems like forever since that slogan was unveiled by the State of South Dakota. It was less than two years ago and lit up the Twitterverse.
Seems like meth is still a big problem nationwide and The Atlantic looked into it. I think The Atlantic is one of the better publications around. They have good writers and go into depth on stories, like this story on meth.

Different chemically than it was a decade ago, the drug is creating a wave of severe mental illness and worsening America’s homelessness problem.

Posted by Mark Haugen at Thursday, October 21, 2021 No comments:

This got my attention: A shortage of books?

Normally, as the holidays approach print book sales rise as people purchase gifts. Unfortunately, current supply chain issues, which for the book industry include shortages in labor, paper and delays in shipping, may impact how many books are available. Recent headlines warning of a book shortage spurred panic that books will be hard to get this year.

If you happen to run out of books, hit me up. I'll set ya up.

Posted by Mark Haugen at Wednesday, October 20, 2021 No comments:

You really should get on the ball and start reading the Bags Morton series - Bags of Bodies, Bags of Rock, Bags of Stone.

Posted by Mark Haugen at Saturday, October 09, 2021 No comments:

Stephen Hunter is most famous for his Bob Lee Swagger novels. They are awesome.

His latest novel is Basil's War. It's neither a Swagger novel nor awesome.

I'm not much of a war novel or war movie guy. Not really into history either except for the occasional biography. I read this one simply because Hunter wrote it.

Basil St. Florian is an accomplished agent in the British Army, tasked with dozens of dangerous missions for crown and country across the globe. But his current mission, going undercover in Nazi-occupied France during World War II, might be his toughest assignment yet. He will be searching for an ecclesiastic manuscript that doesn’t officially exist, one that genius professor Alan Turing believes may hold the key to a code that could prevent the death of millions and possibly even end the war.

St. Florian isn’t the classic British special agent with a stiff upper lip―he is a swashbuckling, whisky-drinking cynic and thrill-seeker who resents having to leave Vivien Leigh’s bed to set out on his crucial mission. Despite these proclivities, though, Basil’s Army superiors know he’s the best man for the job, carrying out his espionage with enough charm and quick wit to make any of his subjects lower their guards.

It was a short story he turned into a novel and you could kind of tell. It wasn't that much of a story. And if you're going to write a movie set in World War II you'd think it would be halfway believable. This stretched the imagination and the realm of possibility on occasion.

Pro tip: Read all 12 Swagger novels; skip this one.