** Python latches onto cheek of Wisconsin book club member. Assuming she’s a Packers fan, I see no problem with this.

** Patrick Lalley at the Argus Leader tells Sioux Fallsians to toughen up, lest you be accused of being Iowans.
Posted by Mark Haugen at Friday, January 27, 2012 No comments:

SOPApillas are safe for now! 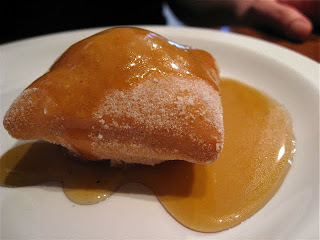 You no doubt noticed that I blacked-out my website for an entire week in protest of the proposed SOPA-PILLA legislation.

Honestly, I don't understand it, but since when does having actual knowledge of an issue prevent people from getting on the bandwagon for or against it?
I just don't think government should legislate fried pastries. If you criminilize sopapillas, pretty soon only criminals will have sopapillas.
But, it looked like my activism, combined with other little websites like Wikipedia and Google, worked. I do laugh at Google though. What was their big contribution to the effort? They put a little black box over their logo? Wow! What effort. Reminds me of the chicken and pig's committment to my breakfast. The egg was a contribution, the bacon was real committment on the pig's part. Maybe next time Google will put a colored box over their logo to show real anger.
So, for now, sopapillas are safe. Though I hear an effort is underway to regulate Potato Oles. Now there's a fight I'll understand. Count me in. I might shut down my blog for two weeks on that one. My Body; My Potato Oles!
Posted by Mark Haugen at Sunday, January 22, 2012 No comments:

I ran across a couple cool websites. First, there is instapaper.com, where you can save stories to read later. It's kind of like a favorites list, but more like a handy place to come back and read stories at home that maybe were too long for you to waste too much time at work reading or too long to scroll through on your smart phone. Just click and it'll save them for wherever/whenever you want to read. Then again, if your job stinks, just read them at work.

The second is givemesomethingtoread.com, which is a site that takes the most popular stories that were saved by people at instapaper.com and compiles them in a handy list with a brief summary of the story or essay. This site I really like.

Here Be Monsters
They did it for the simplest of reasons: adventure. Three friends, on a drunken dare, set out in a dinghy for a nearby island. But when the gas ran out and they drifted into barren waters, their biggest threat wasn't the water or the ocean—it was each other

The Immortal Horizon
Over twenty years later, that man, the man in the trench coat—Gary Cantrell by birth, self-dubbed Lazarus Lake—has turned this terrain into the stage for a legendary ritual: the Barkley Marathons, held yearly (traditionally on Lazarus Friday or April Fool’s Day) outside Wartburg, Tennessee. Lake (known as Laz) calls it “The Race That Eats Its Young.” The runners’ bibs say something different each year: SUFFERING WITHOUT A POINT; NOT ALL PAIN IS GAIN. Only eight men have ever finished. The event is considered extreme even by those who specialize in extremity.
Posted by Mark Haugen at Friday, January 13, 2012 No comments:

The Atlantic has a story recommending nine books for readers and writers. The excerpt below from No. 9 touches a bit on one of my reasons for sticking to the old pulp and ink versions.

How to Read a Book, by Mortimer J. Adler and Charles van Doren:

"When you buy a book, you establish a property right in it, just as you do in clothes or furniture when you buy and pay for them. But the act of purchase is actually only the prelude to possession in the case of a book. Full ownership of a book only comes when you have made it a part of yourself, and the best way to make yourself a part of it -- which comes to the same thing -- is by writing in it.

"Why is marking a book indispensable to reading it? First, it keeps you awake -- not merely conscious, but wide awake. Second, reading, if it is active, is thinking, and thinking tends to express itself in words, spoken or written. The person who says he knows what he thinks but cannot express it usually does not know what he thinks. Third, writing your reactions down helps you to remember the thoughts of the author.

"Reading a book should be a conversation between you and the author. Presumably he knows more about the subject than you do; if not, you probably should not be bothering with his book. But understanding is a two-way operation; the learner has to question himself and question the teacher, once he understands what the teacher is saying. Marking a book is literally an expression of your differences or your agreements with the author. It is the highest respect you can pay him."

Posted by Mark Haugen at Thursday, January 12, 2012 No comments:

And who am I to argue with GK?

"Anybody who can turn out a good story is probably smarter than half the corporation executives in America and a good deal more honest."
-Garrison Keillor
Posted by Mark Haugen at Wednesday, January 11, 2012 No comments:

Beauty is in the eye of the e-book holder

I'm just not one them.

Apparently, though, a lot of you are. According to the UK telegraph, 1 of every 40 adults received a Kindle for Christmas. Supposedly, Amazon sold a Kindle every 30 seconds during the five weeks before the holiday.

Then there are Nooks, I-Pads, Sony readers, and probably even John Deere has jumped into the e-reader market.

I'm happy for those of you who have e-readers. It's just not for me yet, and for all the same reasons you've probably heard ad nauseum.

And it's not that I'm a technically declined person (though our IT guy at work might say otherwise). Frankly, I've been on the cutting edge of the techno craze, from computerizing the sports information duties at Augustana College in the 1980s, to digital photography at my newspaper while others were still using clothes pins to hang wet photo prints, to being one of the earlier ones posting e-books at smashwords.com.

It's been almost a year since I first uploaded Joshua's Ladder to the Smashwords site, followed it up a couple months later with Amy's Ladder and then a couple short stories. They've been downloaded over 3,000 times to various e-readers. And that's not counting Amazon, where I didn't post Joshua's Ladder until, I think, June.

It would be very difficult for an indie author like me to get that kind of exposure back in the day of hawking a book to publishers and the subsequent torrent of rejection letters which are common in the biz. And selling books out of the back of my car wasn't really an option either (ever seen the size of a Miata's trunk?)

So you folks go on reading any way you want. Heck, I'll write novels on a chalkboard if people will read it.

As for me, I'll stick to reading the old-fashioned books ... at least until they quit printing them.
Posted by Mark Haugen at Tuesday, January 10, 2012 No comments:

I'm starting off the new year in a good mood, so good in fact that I've decided to reward five lucky readers of this blog with a free copy of Joshua's Ladder. I figure if you're so bored as to be reading this stuff, then you deserve it. There is a catch though, as there is with anything free.

No, you don't have to sit through a promotional video. You have to (or I humbly request you) email me a picture of you reading the book in your locale, or if you live somewhere boring, go somewhere exciting and take the picture there. I'm especially hoping the dude or dudette who reads this in Alaska (yes, I can tell) requests one.

When I owned/edited/cleaned my weekly newspaper in Tea, SD, we had a deal cleverly called "They're reading The Champion in ..." and people took pictures of themselves reading the paper all over the world. It caught on so much that a lot of other newspapers stole the idead, much like I stole the idea. We even had the "Person of the Year" - nobody would ever think up a clever promotional tool like that.

So, here's the dealio. You send me an email with your mailing address and I will send you a free copy. Then, sometime, email me a picture of you reading it so I can post it here.

My email address is: markhaugensd@gmail.com.

The first five emailers will get the free paperback, postage and handling on me. Just do it! (See how easily I think up these things clever advertising ideas.) After you've read it, send it to a friend if you liked it, or to somebody you don't like if you didn't, and they can do the same thing. Maybe it'll catch on. Maybe it won't. Either way, it's your fault.