I picked up Larry McMurty's TLKWS off the bargain rack at the Wall Drug Book Store on my most recent trip to Wall. He's best known for Lonesome Dove, which I've never read (because it's never been on the bargain rack).

This was a good quick read I enjoyed a lot, though I'm not really sure what the plot was except to follow Wyatt Erp and Doc Holliday around while they wise-cracked and got drunk. Hey, doesn't take much to entertain me some days.

In this "comically subversive work of fiction" (Joyce Carol Oates, New York Review of Books), Larry McMurtry chronicles the closing of the American frontier through the travails of two of its most immortal figures, Wyatt Earp and Doc Holliday. Tracing their legendary friendship from the settlement of Long Grass, Texas, to Buffalo Bill's Wild West Show in Denver, and finally to Tombstone, Arizona, The Last Kind Words Saloon finds Wyatt and Doc living out the last days of a cowboy lifestyle that is already passing into history. In his stark and peerless prose McMurtry writes of the myths and men that live on even as the storied West that forged them disappears. Hailed by critics and embraced by readers, The Last Kind Words Saloon celebrates the genius of one of our most original American writers.

Among the better lines:

"Nine out of ten statements Doc made were nonsense, but it was dangerous to stop listening because the tenth statement might be really smart." Could've been describing me.

"Hold on, I'll just go borrow that shotgun from Wells Fargo," Doc said. "Better to have it and not need it than need it and not have it."

I gave it a 7- on the Haugenometer.

Before this I read Janet Evanovich's Explosive Eighteen, but it doesn't deserve it's own post. I really liked her first seven books of the series, but then tired of them, but kept picking them up and reading them in hopes of recapturing that. But it hasn't happened and I don't know why I didn't quit sooner, but should have. This is my last one. Promise.

They're all just the same. Her main character, Stephanie Plum, hasn't changed in the entire series. The characters haven't changed. No growth, no difference. No more.

I saw it in color and loved it

Wifey and I attended the Jamey Johnson concert last night at the Deadwood Mountain Grand. We both loved it. 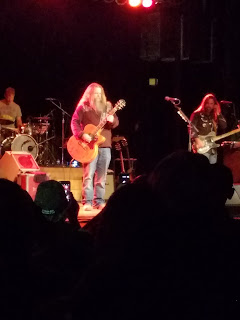 I'm not very good at writing reviews but do it anyway.

Johnson didn't talk much, just played music nonstop for almost two hours, and there's nothing wrong with that. Preferable in most cases.

A couple songs in, after "High Cost of Living," he said: "First time in Deadwood. Didn't know there'd be so many of ya." Long pause, then: "What if we suck?"

He has such a deep, rich voice, it's incredible. The sound mix was perfect, as we were able to hear all his words over a large band. Between back-up vocalists, the guitars, two drummers and a trio of instrumentalists, there must've been a dozen of them. 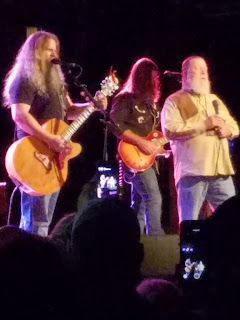 He tossed in a tribute medley to George Jones and two songs and a shout-out to Tom Petty. He also brought his dad on stage for a song (bottom photo).

You can usually tell when a band is having fun and feeding off the crowd (they were) and at one point while the crowd was singing along to "In Color" the lights were turned on so Johnson could see how large the crowd was. It was packed. He smiled and turned to his guitar player with a grin. They dimmed the lights and cranked it up again.

My 20-year-old texted to ask how the concert was. I told him and added: "He speaks to me." The kid "lol"d to that, but Johnson does and the concert turned this fan into an even bigger fan.

I got out of order on John Sandford’s “Prey” novels, but as the great Willie Nelson sings: “There’s nothing I can do about it now.” Except to read the books.

On a side note, great lyrics to that song:


I've survived every situation
Knowing when to freeze and when to run
And regret is just a memory written on my brow
And there's nothing I can do about it now.

“Field of Prey” is #24 in the series and I really enjoyed it. One of the things that draws me to the novels is the setting. Most are set in southern Minnesota, which I know pretty well. So it’s fun when Lucas Davenport ventures into Owatonna or Mankato, with several mentions of South Dakota. This one takes place in the Red Wing area on the Wisconsin border.


On the night of the fifth of July, in Red Wing, Minnesota, a boy smelled death in a cornfield off an abandoned farm. When the county deputy took a look, he found a body stuffed in a cistern. Then another. And another. By the time Lucas Davenport was called in, it was fifteen and counting, the victims killed over just as many summers, regular as clockwork. How could this happen in a town so small without anyone noticing? And with the latest victim only two weeks dead, Davenport knows the killer is still at work, still close by. Most likely someone the folks of Red Wing see every day. Won t they be surprised.