Finished: McBain's 'The Gutter and the Grave'

"The Gutter and the Grave" was originally published in 1958 and republished in 2011 by Hard Case Crime. It's a classic hard-boiled detective novel. 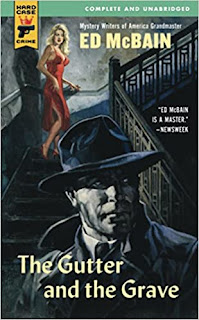 It has the drunken ex-cop, curvaceous women, guns, lots of booze and jazz bands. All the things that made life worth living in the 1950s.

Detective Matt Cordell was happily married once, and gainfully employed, and sober. But that was before he caught his wife cheating on him with one of his operatives and took it out on the man with the butt end of a .45.

Now Matt makes his home on the streets of New York and his only companions are the city’s bartenders. But trouble still knows how to find him, and when Johnny Bridges shows up from the old neighborhood, begging for Matt’s help, Cordell finds himself drawn into a case full of beautiful women and bloody murder. It’s just like the old days – only this time, when the beatings come, he may wind up on the receiving end...

Lawrence Block's third book in his hilarious Tanner series is back...And this time the intrepid spy is up to his neck in a dozen leggy beauties and a life-and-death smuggling assignment out of the cold corners of Russia.

A couple quotes I liked:
"Brains will get you guns, but guns will never get you brains."
"One has to do idiot things from time to time, if only to assure oneself that one is a human being and not a robot."
From Nietzsche: "The true maturity of man is to recapture the seriousness one had as a child at play."
I gave the book a 6 on the 10-point Haugenometer. Goodreaders gave it a 3.7 of 5.
On to the next one in the series ...
Posted by Mark Haugen at Saturday, March 06, 2021 No comments:

This rabbit situation has gotten out of hand. I've written about how they ruined my garden last year. For that I take partial responsibility as my fence was getting raggedy. I pulled up all my old fencing (about 200 feet worth) and am installing new smaller-holed stuff. I have to fortify for this coming spring because they are multiplying! Who ever heard of such a thing? Rabbits breeding like ... well, rabbits. 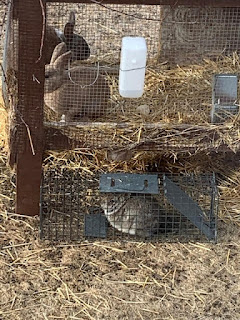 At the back of our house we have a drain field for the septic tank. Sounds gross, but it's not. Actually the grass grows twice as fast there and stays green for most of the year. Deer love it, rabbits love it. A month ago I looked out at it and saw six rabbits grazing. That's not counting my two tame fertilizer-machine rabbits I keep in a hutch. That's not counting, Milo, a rather tame wild rabbit who lives under our front porch and stays on that side of the house.

My wife claims it's because I feed them. Technically, I only feed my pet rabbits, Hank and Waylon. But they spill food, so the wild ones have taken to eating that and sleeping under the hutch out of the way of the wily owl who has reduced my mouse population to zero.

It's gotten so bad, I even spotted a rabbit sitting in my bird bath!

So I've sprung into action. I have several methods of rabbit control in my house that could take care of the situation but they all make rather loud "boom"s, and I have one neighbor who would likely call the sheriff. (He has in the past when he saw my kid walking in the field across the road with a paintball gun! And one other instance I'll write about another day.) 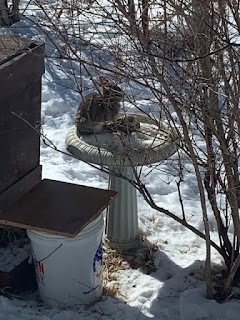 I looked into pellet guns. Quieter. But despite outward appearances I really am a softy, so I went with another plan. I dusted off my box trap and decided to try that first.

I set it by the rabbit hutch, sprinkled some food inside and I've caught SIX rabbits in two weeks. Then I drove them a couple miles away and released them. That's my catch and release plan. I don't know if they are smart enough, or dumb enough depending on how you look at it, to make their way back here; but they are getting a chance. I'm stopping at six, so if any more show up, they're getting Plan B. Boom!

As Josey Wales said to Ten Bears: "I ain't promising you nothing extra. I'm just giving you life and you're giving me life. And I'm saying that men (and rabbits) can live together without butchering one another."

And somewhere down by Hart Ranch (a housing development on a golf course down the road), some poor retiree is asking his wife: "Where the hell did all these rabbits come from?!"

Lawrence Block has a four-book series with the character Chip Harrison. Chip is young rambling man, a scamp, who isn't a very good person but tries to tell himself he is by being all introspective. He's really not a good guy.

It's an okay read as LB really brings the characters to life. I'm not sure if I like the character but he's interesting and keeps me reading.

When young, broke, and single Chip Harrison finds a bus ticket to Bordentown, South Carolina, he knows it was sent by the hand of fate. It’s his way out of wintry New York City, and a way into the warm welcome of Bordentown’s sheriff! But before long, Chip charms his way into the sheriff’s good graces and into the arms of Lucille, the preacher’s daughter. Even Chip should see he is headed for trouble with a capital T.

This is the second book of the series. It was written in 1971 and seems pretty explicit even for the '70s. It's a bit shocking to read today too, as Block uses all the words he'd be "cancelled" for using today; like slurs for various minorities and mentally-challenged people. All the big ones. Surprised he hasn't taken some flak for it.

While I think Block was trying to be humorous, the book came off as dark and gloomy. It made me sad for Chip Harrison and bit sad for Block. I think it's interesting to remember where a particular writer was in their life when they wrote something. This was written 50 years ago. Block was no doubt a different person than he portrays himself today. I've always assumed he went through a dark period in his life and am just guessing that this was written during that time.

Maybe I'm reading too much into it. But maybe not.