This C.J. Box guy might actually make it as a writer. "Trophy Hunt" is the fourth in the 21-book series featuring Wyoming game warden Joe Pickett. 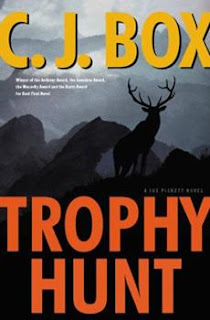 This was another good one. It deals with cattle mutilations. If you're as old as I am you can recall the conspiracy theories of them back in the 1970s and 80s.

So far, all four books have had different, clever plots. Not the same old cookie-cutter stuff that many series writers fall into.

I'm not saying this passage reminds me of anyone or is a correct reflection of government workers (or any kind), but ... I thought it was funny:

"All my clerks are county employees," Ike said. "They work eight hours a day and not one minute longer. They take an hour for lunch and get two fifteen-minute breaks. If you woke one of them up in the middle of the night, she could tell you to the hour how long she has until retirement, how many days of sick leave she's got left this fiscal year, and to the penny what her pension will be. Those women keep me in a constant state of absolute fear."

Posted by Mark Haugen at Wednesday, November 24, 2021 No comments:

Music is part of life

We take a lot of things for granted. One of those occurred to me while driving home late last night with wifey from a Hairball concert with friends in Deadwood.

For those unfamiliar, Hairball plays rock covers from the 1980s and dresses accordingly. If you like Poison, VanHalen, KISS, Queen and Ozzie, you'd like them.

I told her: "We've sure heard a lot of music together."

We met on the dance floor at Dakota Territory, a nightclub in Sioux Falls, in 1986. I'm sure many of the same songs from last night were playing that night. I fancied myself a good dancer in those days, but the moves, like my opinion on my dancing, were mostly influenced by the 3.2 beer I was drinking. Now, I save my best moves for the slow songs.

In the 35 years since, music has been one of things that's bonded us. It's what we do. It's our thing.

Back then it was the Sioux Falls-area music scene. A friend of mine was lead singer for a band called Image. We were groupies for them. It's been rumored I was honorary tambourine player for them. But there was Aaron Baron, Flat Cat, Janitor Bob, Wakefield and many more we frequented at the Pomp Room and Phil's Pub.

We hit concerts in Omaha and Minneapolis: Prince, Aerosmith, KISS and Kid Rock.

We do much the same on an almost weekly basis in the Black Hills. The Robbinsdale Lounge provides mostly local country cover bands on Friday and Saturday nights. Deadwood and Sturgis bring in a good mix of regional and national acts.

We cover all genres from Charley Pride and Elton John to Jamey Johnson, Shooter Jennings and Neon Trees.

If they're live, we're there from rodeo grounds to coffee shops to street dances. We love it.

When we travel it's one of the first things we ask at the hotel desk: "Any place nearby that plays live music?"

I often think about it but never have really settled on what it is about music that makes it so special. Maybe it's the escape-ism. No worries when you're listening to a band. It's also the musicianship and the singing ability. I always appreciate people who can do things I can't or haven't made an effort to do.

We really like supporting the locals and sometimes it's just cost-prohibitive, or we're too cheap, to go listen to some of the national bands I'd enjoy but not that much. For instance, the Zac Brown Band is coming to Rapid City this month. Cheapest ticket is $99. I've never once asked Alexa to "play Zac Brown Band" so I'm certainly not going to dish out a hondo to hear "Chicken Fried" for the 1,000th time, even if I am interested in how the band sounds live.

We also can be a bit snobbish. We critique them, especially the national acts. While we have our opinions, I'm not going to sit and nit-pic a local weekend band when they have day jobs and are just doing this for fun. It takes a lot of guts to get up in front of people and sing George Strait covers. I sing along to the Georges (Strait and Jones) in my kitchen cooking supper, but nobody is around to complain except my dogs and they don't say much. I take their silence as approval.

Looking back, I have no idea how many musicians we've listened to, but I know we never walked out wishing we hadn't.

Posted by Mark Haugen at Saturday, November 13, 2021 No comments:

The third in the Bags Morton series: Bags of Stone.

Posted by Mark Haugen at Thursday, November 11, 2021 No comments:

Take your turkey and stuff it

I have probably an unpopular opinion regarding Thanksgiving. Yes, I have a lot to be thankful for this holiday and I'm very appreciative of that. But it's my least favorite holiday in terms of the food traditionally served.

I was paging through wifey's food magazine the other day, the Thanksgiving edition, and it reminded me that very little looked good to me. What did look good were some of the side dishes which seemed ten times more complicated than they needed to be. But that was about it.

For starters, I'm not a big fan of turkey. Ya'll can argue about the best way to cook it, but I'm not a fan of any of them. But, we always have it and I nab some of the white breast meat, slop on some gravy and douse it in salt and pepper and call it good. Turkey legs and other dark meat, yuck.

Mashed potatoes. Not a fan either. I think I've mentioned that for the past couple years we've moved to a modified Mediterranean diet - more fish and very little white starchy stuff - meaning we rarely eat potatoes unless fries or hash browns when we're out on the town. We substitute wheat noodles for white, long grain and brown rice instead of white rice. We aren't total Nazis about it though. I have a particular weakness for Lay's potato chips after a workout. But I never really cared for mashed potatoes since I was a kid. Tolerated them, but didn't enjoy them.

Cranberries? Gimme a break. I'd rather have a handful of Sour Patch Kids.

Stuffing is okay once a year. It makes the meal bearable.

If it weren't for pumpkin pie, the eating portion of the day would be a waste to me. On T-Day and the preceding few days I'm usually good for two pies. Not slices. Entire pies. Straight up. No whipped cream. A slightly burnt crust earns bonus points.

The other holidays are much better on the taste buds.

Christmas, we usually have prime rib. Can't beat that.

Unless it's Easter. Then we usually have lamb chops and scallops or crab legs.

Thanksgiving has meaning for me. I just don't look forward to the food many of you make a big hub-bub about. Have a good one though. Just don't save any leftovers for me.

Posted by Mark Haugen at Thursday, November 11, 2021 No comments: