A pacifist in the burger war

Want to know something weird?

I see people arguing online over who has better burgers or fries. I can't remember the last time I had a fast-food burger. When I do, it's usually a Big Mac. I just seldom do fast food, not because I'm a health nut but because I almost always run home for lunch when I'm working. I let the dogs out and eat a peanut butter sandwich.

My go-to fast food joints are Arby's or Taco Bell or Taco Johns and I doubt it's even once a month. Even in sit-down restaurants, a burger is rare. I had one maybe two months ago at Ruby Tuesdays. I'm a reuben guy. The place we frequent most is a local dive bar and grill called Joe's. But there, I almost always have a patty melt.

I don't purposefully avoid those popular burger joints as any moral stand against burger chains or for any particular reason other than I seldom crave a burger over a roast beef sandwich or greasy taco.

I've also never eaten at Chick-fil-A. I don't think I've ever ordered a chicken sandwich from anyplace anywhere. To stand in line for one at Chick-fil-A is unfathonable to me. Not gonna happen. It's not a political thing, pro or con against Chick. It's just that chicken sandwiches do nothing for me.

And don't get me started on chicken wings - a food of last resort.

I don't do lines either. Across the street from the hotel we stay at every year in St. Pete Beach, FL, are a Dunkin' Donuts and a 7-Eleven. Right next to each other. My routine in the morning, home or away, is one cup of coffee. Wasn't always that way, but has been for the last few years. Not two, not three - one.

So every morning in Florida I walk across the street and view my two options for coffee. Dunkin's has the best. I know that. And so do a lot of other people as there is always a line 20-people deep at Dunkin. There's no line at 7-11. My hatred for lines is stronger than my love of a marginally-better cup of coffee. So I get a cup out of the pot at 7-Eleven and grab a cherry Hostess pie and return to the hotel a happy man.

Not that I'm some sort of rebel or anything, but there are other things that don't interest me so I don't feel the need to wade into those waters. I've also never seen a Star Wars movie nor an episode of the Kardshians or Samantha Bee or watched a WNBA game. (I don't think I'm unique in those latter two.)

Something either interests me or it doesn't. There's very little gray area there. I'd rather watch Breakfast Club for the 500th time than a Star Wars movie once.

Maybe someday I'll try an In-and-Out burger or a Chick-fil-A sandwich, but it will be because it's the only option when I'm hungry. I'll let you know when I do, but neither are on my bucket list. Consider it my gift to you - one less person you'll have to wait behind in line.

Stuff I read this past week and found interesting. You might too. Or might not. Roll the dice.

** WWE Beer Slammin': For Rapid City, a place she’s hiked, camped and vacationed in before, she hopes to visit the breweries. “There’s a lot of breweries and… the local stuff I can’t get anywhere else,” Baszler said.

** Idaho Potato Heads: “We’re not going back to the days of the Aryan Nations. We are past that,” Hammond said. “And we will do everything we can to make sure that we continue to stay past those kinds of problems.”

** Drinking Problems: Maryam Amouamouha, Ph.D., a graduate student at South Dakota Mines, has invented a new device that could revolutionize water treatment and improve water quality and availability around the world.

** Gun Boom: “But seeing those people climb the walls and attack the Capitol — on top of all the other shootings of Black people — just confirmed why I stood in the cold and got my firearm. The bottom line is that we have to protect ourselves and our homes. But we purchase guns differently,” Hawkins said, stressing the sense that more Black people are buying guns for the sake of protection against racial attacks. “I drove a long way to take safety classes,” she added. “I went to the range.”

** Researchers on Ticks: Estimate that over 14 percent of the world’s population has had a case of Lyme disease due to contact with a tick. That’s one in every seven people. With the warm summers months between May and August bringing a resurgence of disease-carrying tick populations, study authors are sounding the alarm to prevent more infections.

It's been over a month since I wrote this and didn't hit "publish" because I didn't feel it did Stanley justice. But I haven't been able to write one better, so here it is. I still get that lump in the gut when I think about my buddy and tears when nobody's looking. Damn I loved that dog.

This is the first night in the nearly thirteen years I've written at this desk that I've not had my dog, Stanley, either at my feet or over my shoulder on his bed.

I had to put him down today.

If you're a dog person, you get the feeling. You can't explain it to anyone else. So it's been a tough day. I'm not gonna go all Oprah on you but do feel I owe it to Stanley to give him a proper obituary:

Stanley was born in the Black Hills of South Dakota to a Golden Retriever dad and a Yellow Lab mom. When my son and I drove to the ranch to choose a puppy from the litter, the lady opened her garage door and a mob of ten Goldadors (they call them that so they can charge you an extra 50 bucks) came storming out of the garage. It was a thunderstorm of long-legged furballs with sharp puppy teeth jumping and nipping us. There was one that seemed more relaxed than the rest. We took him. Stanley, like Stanley Hudson on The Office television show, was chill.

I had more than one person, including a priest, tell me over the years that he was soulful. You could see it in his eyes and his gentle demeanor. I think it's safe to say that Stanley was one of the only dogs to ever spend a weekend in the rectory at the Cathedral in Rapid City as a priest puppy-sat him when we were away. He was also probably the only dog to ever poop in that rectory (that's the priests' residence for you non-Caths).

He lived about the best dog's life a dog could live.

We put in thousands of miles running trails in the Hills, gravel roads in the middle of the prairie, and the trails around our house. He chased antelope, stared down rattlesnakes, mountain lions and lost a couple battles to porcupines. He chased deer out of our backyard. The one time I actually saw him confused or stunned was when he took after a deer across our road, but rather than run away like every deer had always done, this one put her head down and charged at him. He skidded to a stop and looked at me like "What the hell?" Then I saw the fawn behind her and figured out what she was doing. I hollered for him and he happily returned.

Up until the last couple years he terrorized the rabbits in our area. Many a cottontail met their demise to the jaws of Stanley. But gophers were his favorite. He'd find a fresh hole near my garden and lay next to it, staring into the hole. He'd sit there for hours until I'd drag the garden hose over and start pouring water into the hole. The gopher would pop his head up and take off and Stanley would nab 'em. He didn't eat them. He just carried them around for a while like trophies, then drop it and roll in it.

Rolling in stuff was his other favorite past time. I was always amazed at the number of dead things around our area. You'd never know they existed until you saw Stanley rolling in deep pleasure on top of a dead deer carcass.

Stanley also loved baseball. He'd sit between my son and I when we played catch in the backyard, just waiting for a wild throw that he could pursue and then the chase was on as we tried to catch him and get the ball away from him. He attended ball games and practices and fetched foul balls.

And then there were the pheasants. I'm not a big hunter but manage to get out a couple times a year. My son trained him a little, but Stanley operated mostly on instinct and it was a good one. He loved it, lived for it. On the rare occasion I hit one, I've seen him catch them before they hit the ground. And when I missed the shot, I swear to God, Stanley would turn around look at me like "You idiot" as the bird flew away.

He went everywhere with me. From room to room in the house and followed every trip and back to the garden. He was a constant presence in my life. You don't lose that and not feel it.

He brought joy to everyone in the household. Everyone has their own Stanley stories. Another of his greatest joys was when either of my daughters or my son returned from school, college or adult life. I could say: "Rylee's coming home today" and his eyes seldom wavered from the door, just waiting.

I'm pretty OCD on my schedule and arrive home every day for lunch at 11:45. His clock was set to that time and he would be sitting in a chair in this room watching out the window every day I pulled in. I'll miss that too.

I've had a number of dogs, all good dogs. But Stanley was special. He was a great dog.

His buddy Huckleberry will miss him too. Stan's been in Huck's life since we got him eight years ago. He tolerated Huck like an older brother does his younger sibling. Huck can be a jerk, try to take Stanley's food and Stan just let him have it. Huck laid on Stanley, he followed Stanley everywhere. I don't think Huck quite knows what's going on yet, but I did take him back to the garden when I buried Stanley so he'd have some idea of what's going on. But I don't think Huck has the mental capacity to register it. He sniffed Stanley a couple seconds then went off to eat some grass.

Stanley will always be in my garden now, my favorite place and his too. But it'll never be the same.

R.I.P. to my best bud, Stanley 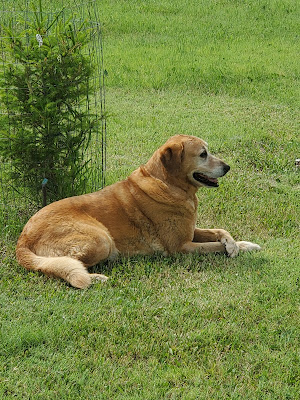