Writers Write has a story and the video of my buddy Steve with Craig Ferguson.


Craig Ferguson recently conducted a funny interview with Stephen King on his late night talk show on CBS. King's most recent book is The Wind Through the Keyhole. Stephen King says that in most print interviews he inevitably ends up being asked what he was like as a child that made him filled with so many horrific and wild ideas.

King then talked about an idea for a story he never finished called "The Ladies Room," which he says is the "one place Superman can't go." King says that in the story men's wives keep going into the restroom and never come out. He says he could never figure out what was going on in there and so he couldn't finish the story.

Ferguson said, "I feel like you got me all revved up and then left."

The Star-Tribune has a good story about some Twin Cities authors coming over to the e-publishing world. It's wild, wild world out there ...

Landvik and other Minnesota writers are following a trend that began with a few blockbuster authors -- Stephen King has dabbled in this, releasing short stories as Kindle Singles while continuing to publish the traditional way. Barry Eisler has embraced it, turning down a $500,000 advance from his publisher in order to do everything himself -- and keep all the profits.

"It's a good time to be an author," said Jim Milliot, co-editorial director of Publishers Weekly, an industry trade journal. "You do have a lot of choices. If you think your publisher is screwing you, you can just do it yourself."

Kino rides along on vacation

My son and I, and dog, recently spent a few days camping, hiking and fishing in the Big Horn Mountains of Wyoming and the Absaroka-Beartooth Mountains in Montana. I am working to convince my son that other manly pursuits, besides hunting, fishing and football, can include reading. I told him girls appreciate a well-read man. (I don't know that or anything else about women but I'm grasping for motivational straws to get him to catch the reading bug.)

Here Luke is on the drive home Saturday, absorbing "The Pearl." I like the fact that a 14-year-old boy is reading John Steinbeck. I like it a lot. It's not due to me though. It's summer reading required by the school. Whatever works!

And, by the way, we had a fabulous get-away. Kino could only wish to have had such a good time. 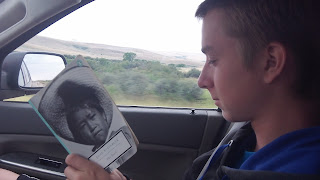 Some thinkin' for the weekend, sorry

The Evolution of a Creationist appeared recently in the Minneapolis Star-Tribune. I would think both sides of the argument would find it interesting, but it makes me wonder too if people have open enough minds to ever reconsider their opinion on this.

Either way, I point it out to you anyway. Here's a snippet:

The mathematical odds of forming, by chance, a single protein molecule from its component parts can be shown to be so unlikely that it could not have happened anywhere in the known universe in 30 billion years. Much less could it be combined with the hundreds of other components to form the simplest possible living cell.

Similarity of form does not prove common ancestry. It can also mean common design. (Young Earth creationists believe that the original Genesis kinds were intrinsically capable of great diversification, something we have seen with the breeds of dogs -- who remain dogs, nonetheless.) And fundamentally, fossils require rapid burial. Closed clams, seen all over the world, were covered before they could open in death.

As to the age of the Earth, this seems to be the most formidable barrier to accepting biblical creation and requires more technical knowledge. Let me cite a few examples that point out the weakness of the arguments for old age and the increasing scientific respectability of a young earth view.

Author Gore Vidal died yesterday. His father, Eugene, who grew up in Madison, SD, is more interesting to me.

Eugene Vidal is in the South Dakota Sports Hall of Fame. Eugene was in the 1920 and 1924 Olympics, participating in the decathlon. He had been a stud athlete at USD. According to Wikipedia, he was a Coyote from 1913 to 1916, Vidal was a football, basketball, baseball and track letterman. He was captain of the University's 1915 football and 1916 basketball teams, leading the basketball team in scoring in 1915 and 1916, thereby assisting the University in winning an Intercollegiate Conference Title during his participation.

His bio doesn't peak with his athletic accomplishments. Vidal taught aeronautics at West Point and was one of the first Army Air Corps pilots.

And maybe his biggest claim to fame ... it's alleged he had a romantic relationship with Amelia Earhart.

How cool is all that!? Gore had some big shoes to fill. Jonah Goldberg, at least, doesn't seem to think he did that great a job of filling them.