** NPR has a story about the films and books that got a helluva lot of attention in 2011.

** Wow, this guy really doesn't like LeBron James. Here he talks about his book The Whore of Akron. Be warned - some naughty words.

** Writers for City Pages in the Twin Cities offer their top music picks from 2011. These guys are too cool for a nerdy blog like this, but I try to rock the place once in a while.
Posted by Mark Haugen at Thursday, December 29, 2011 No comments:

If old books could talk 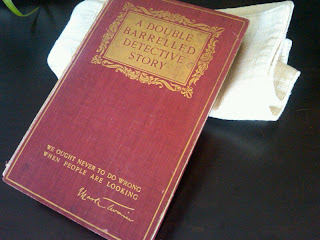 I struggled this week to get through a Jonathan Kellerman novel, Evidence, that I picked up cheap at the Border's GOOB sale a couple months ago. I usually like Kellerman, but this one was a slogfest.

So to cleanse the palate I went back to someone who never disappoints, Mark Twain. I pulled out an old 1902 copy of A Double Barrelled Detective Story picked up years back at a used book store.

It was especially timely, even given its copyright date, because it features Sherlock Holmes, who is all the rage in the movie theaters now. 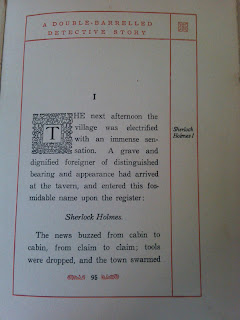 I love Twain's story, but I also love the exquisite layout they used in old books. And as an added bonus, about halfway through the book, I turned the page and some old newspaper clippings from 1944 fell out. They were about World War II.

The inside cover has the signature of Olga Schroesser, who apparently owned the book at one time. The book's spine is gone, though the pages are still held together and the cover and back cover are in good condition. It's interesting to me to think not only of the story inside the book, but the story of the book. I bet it's a good one too.
Posted by Mark Haugen at Monday, December 26, 2011 No comments:

Christmas time all the time on TV

It seems there are so many Christmas shows on television now that I end up hardly watching any of them.

I'm not being a Grinch. I'm glad there are a lot of holiday shows, compared to the usual crap on TV. But do we really need "The Santa Clause 3: The Escape Clause"? 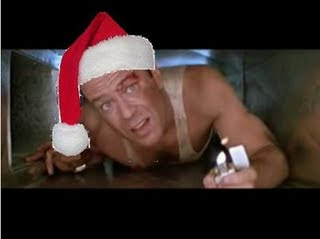 "A Boyfriend for Christmas"??

"Three Wise Women"????? Wow, it's like the Hallmark Channel is just setting ol' Haugen up to write something that would get him in trouble.

I counted on a television schedule, and starting Dec. 1 there were about 20 Christmas shows per day for the first three weeks of December, with about three days of 50 shows. That was just the warm-up for the big day, Christmas Eve. I might be off by one or two, but by my count there are 103 shows that day. But they counted "The Bishop's Wife" as a Christmas show. Really? I've never seen it, and probably never will, but, really?

Back when I was a kid, there was Charlie Brown, Rudolph the Red Nose Reindeer, Frosty the Snowman and maybe some Grinch show. That was it. And they weren't played on an endless loop on the Hallmark Channel because WE ONLY HAD THREE CHANNELS. Oh well, whatcha gonna do?

I will watch four Christmas shows now. The old faithful ...

"Christmas Vacation" - Nobody does Christmas like the Griswolds. Clark: "Can I refill your eggnog for you? Get you something to eat? Drive you out to the middle of nowhere and leave you for dead?"

"Elf" - Will Ferrell is just one of the funniest guys out there. "This place reminds me of Santa's Workshop! Except it smells like mushrooms and everyone looks like they want to hurt me."

"A Christmas Story" - So many great lines, but one of Santa's most memorable: "You'll shoot your eye out, kid."

Or Argyle: "If this is their idea of Christmas, I gotta be here for New Year's."

Or me: If loving "Die Hard" on Christmas is wrong, I don't want to be right.
Posted by Mark Haugen at Tuesday, December 20, 2011 No comments:

Merry Christmas! We didn't mail Christmas cards again this year because I wasn't sure if the Postal Service would still be in business. Better safe than sorry. What I am sorry for is the previous 23 Christmases when we didn't send cards either. Ironically, we thus contributed to the demise of the Postal Service. You're welcome, FedEx!

I thought I'd give you the run-down on our fam just in case you don't have access to the internet and missed out on the headlines. 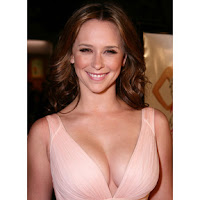 Wifey is doing well. We celebrated our 23rd(I think) anniversary this year. She's still whispering to ghosts and snoring real loudly. But I don't say much (if you count not saying much posting it on the internet). I've learned something these past few years. Best marital advice (and advice for raising daughters) comes from my son who says: "Just smile and wave, Dad. Smile and wave."

You probably saw our son Timmy - everywhere! Ol' #15. He finally got his big shot with the Broncos after they started the season 1-4. I've always told him that nobody likes a hot shot, like Aaron Rodgers or Tom Brady. Anybody can win games if they do their best from start to finish; the really good ones just give it their all in the final two minutes. Let the other team get overconfident, then crush their dreams. Speaking of crushed, how about those atheists? They seem really unhappy with Timmy for some reason. He's not too worried about them though, considering he's preoccupied with practically carrying the future of Christianity on his shoulder pads. They say there are no atheists in fox holes; well, there's none left in Colorado either. 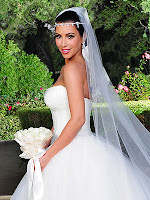 Our daughters really kept us hopping this past year too. Kim announced her engagement on her reality show on television. Then we dumped a few million on her wedding and it lasted slightly longer than a Twins game. Heck, I've had hangovers that lasted longer. Critics say it was a meticulously planned publicity stunt, but between you and me, she ain't that smart.

As tough as Kim's year was, Lindsay's was even worse. As you know, she's been back on the nose candy, the gutter glitter, the wacky dust, the California corn flakes. And she got caught. She did a little rehab, but not enough to make the mean ol' judge happy. So she did some community service at the morgue. It was good for her, though she did have to pull out of her next big movie, Deep Throat, because of all this hullabaloo. Fear not, though, Hef came through and signed her up to be covergirl for Playboy. We're so proud. Whoda thought, our little girl from Parent Trap would go on to such success.

And some of the extended family had a little rough go of it too. 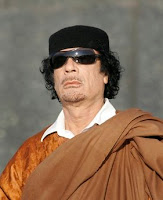 There's ol' Uncle Mo and his goofy hats. Mohammar's always been the rambunctious one, but this year really took the cake! Nothing like a little revolution to keep the ol' blood flowing. Again, the Colonel caused us more than a few gray hairs. How? Well, you try planning a funeral for that guy! He's dead. No, wait, he's been spotted in the desert. He's dead. No, he's back in Tripoli. I don't know how many ham salad sandwiches we ended up giving away to the Mission, but it was a lot. Finally, I said, "I'm not cooking another ham until I see his bloody corpse." When I finally did, those silly rebels said they buried his body in the middle of the dessert! Go figure. So now we've got an extra burial plot if someone wants one cheap.

Otherwise we've had a pretty good year:
* We taught the guinnea pig to holler "row."
* We have no Haugens on the America's Most Wanted list for the first time in seven years. Yes!
* Mother-in-law is staying out of our business as she joined the booming Occupy Mahjong movement.

Finally, thanks to all of you for the couple thousand downloads over at Smashwords.com and buying up all those copies of Joshua's Ladder.

Finally, really, may you have a Merry Christmas and Happy New Year!
Posted by Mark Haugen at Thursday, December 15, 2011 No comments:

Pretty proud of myself with the collection of linky-dink things I ran across the past few days. The ol’ Rushmore state has some pretty good writers – thought-provoking and heart-touching.

** This "Day of War" thing is going to be a big deal. Trust me. I know people who know people and they agree it’s going to be Haugmungus. The Rapid City Journal says: Cliff Graham has a lot going for him right now. The 30-year-old Rapid City native is an accomplished author and speaker, and is about to see his work hit the big screen as filmmakers adapt his writing into a movie.

** Joseph “Jody” Bottum, formerly an editor at the Weekly Standard and First Things, appears to have a hit on Kindle with his new e-book, Dakota Christmas. It’s only 99 cents.

** John Pollman of theSioux Falls Argus Leader considers the 60 minutes before the sun sets to be the “Golden Hour” for hunting the state bird. For any non-hunters this story offers a good glimpse of why many South Dakotans enjoy a pheasant hunt with their dog.

** Speaking of pets, Shirley Halleen of the Argus has a column that begins with a statement I well agree with: New pets should come with the directions: “Make room in your heart, because I will fill it with both love and pain.”

** Former Rapid City mayor and current SBA dude, Jim Shaw, wonders if libraries are about to go the way of the buggy whip.

** And one of my favorite writers, Stephen Hunter, has a new book out: Soft Target. Hunter tells more about it over at Powerline.

"No one can write decently who is distasteful of the reader's intelligence, or whose attitude is patronizing." - E.B. White 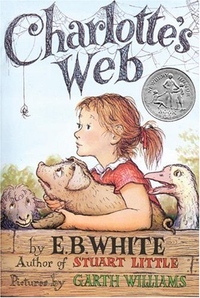 I don't have many rules I follow when writing (as you know), but when I saw this quote from E.B., the author of Charlotte's Web and Stuart Little (as if you didn't know), it did click with me that I've always considered my readers smart (though easily annoyed when I over-use parenthesis).

Not to the extent of Dennis Miller, but I enjoy dropping some obscure references on occassion. I don't use the big words of George Will, who obviously doesn't underestimate his readers' intelligence, but I would use them if I knew some. When it comes to humor, I often rely on sarcasm, which can be dangerous, but there again I assume the reader gets it, or, if they don't, tough luck.

So I just wanted to make it clear that even if you are a moron reading my stuff, it's news to me and I won't treat you like one. This is a safe haven for morons.
Posted by Mark Haugen at Sunday, December 04, 2011 No comments: