I'm not much for self-help books, because, as I told my wife, really, for me, what's the point?

I jest. I could use a lot of help, but I'm kind of to the point in life where I feel I know what I could do to improve myself. When I identify something, I either change it, or choose not to. I don't wait for New Year's Day to make a resolution to do something to make myself better. Thing is, sometimes, after weighing the pros and cons I choose to continue doing something maybe I shouldn't because I like it too much and am willing to roll the dice.

One self-help book I read years ago and found valuable was Dale Carnegie's "How to Win Friends and Influence People." I recommended it to my kids and other young adults I encounter in the workplace.

But I've been hearing a lot about this Jordan Peterson fella. He's hot on social media. He does a lot of videos, which I haven't watched. And he's written a best-selling book, 12 Rules for Life. I continued to hear and read more about this book. One friend told me that two of his friends read it and found it life changing. A former intern in our office told me the same thing.

So even though I didn't feel like having my life changed, I figured it couldn't hurt to give it a whirl, see what it was all about. Plus, Peterson seemed to be making all the right people mad. I was curious.

I just finished it, and it wasn't life changing. It was mostly life wasting. Now, that may be a little harsh. I did mark it up quit a bit with my Bic, which is usually a good thing. Mostly, it just meant he had some good lines I liked, some information I found interesting. But it was a slog. It was common sense ideas surrounded by Freud and Jung references wrapped around Biblical references that made it five times longer than it needed to be.

In essence, I found he had two main points: 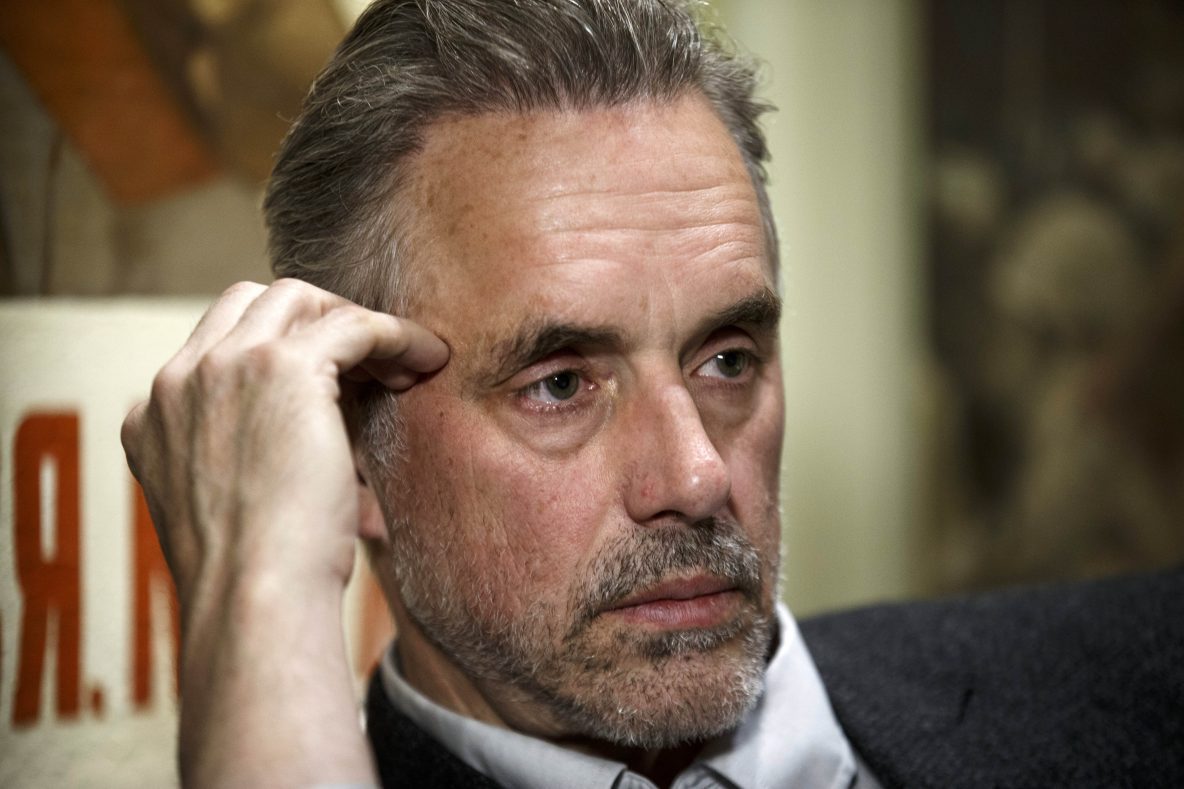 1 - "There is a dividing line between order and chaos." He proffers that living along that line makes life more fulfilling. You become an interesting person, without slipping into craziness.

One reviewer probably explained it well and accounts for my lack of excitement about the book. He said, if you've had a responsible father figure in your life and you have an average working knowledge of the Bible, there's not much new in here for you.

But, as we know, a lot of people, particularly young men, don't have those two things in their lives. And for them this book has changed their lives for the better. That cannot be a bad thing.

As for all the criticism about Peterson, particularly among the political left, I don't see it in the book. Maybe it's in his videos. But I'd bet it's mostly overblown, as there is now an academiac, a psychiatrist, speaking clearly and convincingly (even with footnotes!) with suggestions that (gasp) there are differences between men and women. That was really the only thing I saw in this book, and it was one chapter, that I can figure makes them nuts. It doesn't make me nuts.

He comes across as a little arrogant at times (he is Canadian after all), but that doesn't make him wrong.

Here's a good recent story on him from The Hill.

Among things he points out:

Children in father-absent homes are four times as likely to be poor.

He preaches confidence. "If you're not the leading man in your own drama, your'e a bit player in someone else's."

Life is suffering. As say, Buddha, Christianity and the Jewish faith.

Take risks, let children take risks. "When you explore boldly, when you voluntarily confront the unknown, you gather information and build your renewed self out of that information."

"You have to say something, go somewhere and do things to get turned on. And, if not ... you remain incomplete, and life is too hard for anyone incomplete."

The majority of people who were abused as children do not abuse their own children. Some do mimic their abusers, but others learn from the abuse that it is wrong and choose not to do it. "Abuse disappears across generations."

Pay attention. "The things you can see, with even a single open eye. It's no wonder that people want to stay blind."

From Freud: "A man who has been the indisputable favorite of his mother keeps for life the feeling of a conqueror, that confidence of succes that often induces real success."

It can be tough to choose an upward path because it is difficult. "Vice is easy. Failure is easy, too."

"You are important to other people, as much as to yourself. You have some vital role to play in the unfolding destiny of the world. You are, therefore, morally obliged to take care of yourself."

Define who you are. Refine your personality.

"To stand up straight with your shoulders back is to accept the terrible responsibility of life, with eyes wide open."

Seems for not liking the book, I wrote a long post about it. Maybe I did like it?

Among several other novels, Lawrence Sanders wrote seven books featuring Palm Beach detective Archy McNally. Then Sanders died and Vincent Lardo picked up the McNally series with nine more. McNally’s Bluff is the sixth one of those.


When self-styled impresario and former human cannonball Matthew Hayes rents a luxury villa on Palm Beach's famed South Ocean Boulevard, the locals roll their eyes. But when he scuttles the traditional backyard accoutrements of swimming pool and tennis court in favor of a grand garden hedge maze modeled after the one at Hampton Court, the South Florida smart set can't wait for their invitations to the gala opening of the Amazin' Maze of Matthew Hayes.

The big night arrives and gasps of wonder and delight are replaced by those of horror, as Hayes's ladylove, Marlena Marvel, in the role of Venus, is discovered at the center of the maze, very dead indeed. The authorities are stumped, as Hayes's carnival background gives rise to a number of possible suspects - and the huge crowd at the unveiling included its fair share of questionable characters. Or are there other forces - and more devious minds - at work? And Hayes's flair for the dramatic only complicates a mystery that has more false leads than his Amazin' Maze. It's up to Archy McNally to see through the scam and catch a killer.

Goodreaders give it a 3.7 of 5. I gave it a  6 of 10 on the Haugenometer. The characters were entertaining, but the conclusion to the mystery was a bit forced. It also seemed the author resorted too often to  “let me give you a recap” of what’s happened so far, because it was getting a little too twisty and turny. If your mystery is too complicated to follow, don’t write it; at least not for simpletons like me.

In a world that I barely recognize anymore, it's good to have books. Books are good and orderly, the words are black, the pages white, the pages are numbered consecutively, the planets align. You can pick a genre you like, step outside from time to time, but always come back and know that Koontz will Koontz and Grisham will Grisham.

But in the real world now, where Boy Scouts aren't boys, where Tom Brokaw is a horndog, lettuce can kill you, Cliff Huxtable is a rapist, and Kanye West makes Kim Kardashian look like the brains of the family, I'm tossing in my cards, chomping on the popcorn and rolling my eyes at this sci-fi show called life - while reading a book.

I just ordered 12 Rules for Life by Jordan Peterson. Maybe he can make sense of it all.

One of the rules for men should be: If you don't act like your stuff don't stink, it won't be big news when it does.

Another rule should be: Read the links Haugen provides you:

** If for some crazy reason you actually want to stick around this earth longer than you normally would, here are five habits that can add more than a decade to your life.


The five healthy habits were defined as not smoking; having a body mass index between 18.5 and 25; taking at least 30 minutes of moderate exercise a day, having no more than one 150ml glass of wine a day for women, or two for men; and having a diet rich in items such as fruit, vegetables and whole grains and low in red meat, saturated fats and sugar.

** Here's some good timing for this author whose “definitive biography” on Bibi just came out this week: Bibi: The Turbulent Life and Times of Benjamin Netanyahu.

** This guy wades into dangerous territory to show (using science) that teachers are not underpaid. Unleash the hounds on him!


Most commentary on teacher pay begins and ends with the observation that public school teachers earn lower salaries than the average college graduate. This is true, but in what other context do we assume that every occupation requiring a college degree should get paid the same? Engineers make about 25 percent more than accountants, but “underpaid” accountants are not demonstrating in the streets.

So this made my day … 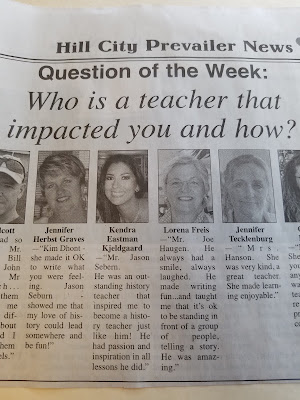 We get some weekly papers at work, including the Hill City Prevailer. A co-worker was going through them today and she asked: “What’s your dad’s first name?” (Actually, she emailed the question even though my office is 10 steps away.) I emailed back: “Joseph.”

A minute later she brought this clip to me.

Almost 40 years later and 350 miles away, he must’ve made quite the impact on Lorena.