Silva breaks a string with 'The Cellist'

There's nothing worse than waiting anxiously for a specific book to come and and then it's a flop. Actually, there are a lot of things worse, but in the realm of book-reading it's numero uno. 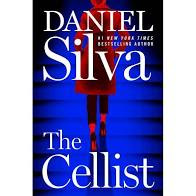 As you faithful blog readers (bleaders?) know, I'm a big fan of Daniel Silva and his Gabriel Allon books. So I nabbed his newest one, The Cellist, the 21st in the series, and let it rest atop my TBR pile for a special occasion - the flight to D.C. and back to see my son.

It's a thick one - 458 pages. Fortunately, a thunderstorm left us sitting on the tarmac an extra hour on the connecting flight at Chicago, so I was able to finish it with plenty of time to spare so I could grouse about it to my wife in the seat next to me.

For starters, it was dull. The first 350 pages were full of banking jargon, Russians setting up fake accounts, laundering money, shell corporations, etc.

After that, it picked up a little but then he ruined it with nonstop references to the President, the Coup and Jan. 6. He doesn't name Donald Trump, but it's obvious (for the second book in a row). If I'd wanted a Bob Woodward book detailing that portion of Trump's presidency I would've bought one. But I bought a book thinking it would be Allon killing terrorists and saving a pope or a prime minister and traveling Europe and the Middle East and teaching me stuff about famous artists.

This was Trump bashing amid a lame Russian financial scheme during COVID with the heroine being a cellist. Yes, a cellist!

Silva typically weaves current events into his fiction and did so a bit with President Obama, again, not naming him. But it was never so over the top and never vitriolic. This was over the top and vitriolic. I get it, you don't like him. Write a non-fiction book about it with your wife, NBC News correspondent Jamie Gangel.

Why in the world would the author sully a work of fiction with his personal anti-Trump propaganda? I have been a fan of Mr. Silva for many years but will no longer buy any future works of his.

And, if nothing else, the politics was forced ...

If I wanted to relive the last 18 month of the pandemic and a one sided view of US politics, I might, only barely have liked this book. It’s really sub-par writing for Silva. I’ve enjoyed most everyone of his prior Allon books! However, Silva’s treatise on his obvious world views, from carbon footprint, to sustainable green energy, evil billionaires, corrupt banks was too much. And no I do not forgive this author for making me pay to read his personal opinions!

It seemed he was writing for his buddies which he name-drops in the humble-brag acknowledgement section: Andrew Lack, Sally Quinn, Peggy Noonan, Henry Winkler, Gary Ginsburg, etc. Next time, just write a column in the Washington Post.

I don't even necessarily disagree with what Silva was saying, it's just not what I'm looking for when I'm looking to escape my day-job where I listen to that stuff endlessly. If I wanted Samantha Bee, I'd read her.

Hopefully, since Trump is done, so is Silva's vendetta unleashed in his novels.

I gave it a 6- on the 10-point Haugenometer. I hope he gets back on track with his next book or I'm afraid the Daniel Silva train has run out of track with this reader.