Had low expectations for this one. The coworker who borrowed it to me didn't seem too enthused about it but thought I might like it. I did. A lot. 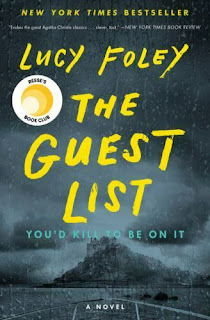 First let me say, I love women. I'm married to one and have two daughters. My physician is female; my veterinarian is female. I entrust my most valuable things to women. In my management positions I've hired maybe seven or eight people, all women.

Now, having attempted to establish my bonafides as an admirer of the skills of the opposite sex, it pains me to say I'm not a big fan of female murder-mystery writers. With a few exceptions, like Faye Kellerman and Joyce Carol Oates, they generally aren't dark enough for me. They're too wordy. I like it dark, stark, bloody and cold-blooded.

And this book featured a wedding planner? I'm thinking J Lo and some rom-com kind of thing. And it featured multiple point of views, alternating timelines, like flashbacks; more things I usually don't like. I knew I wasn't going to finish it.

But low and behold here comes Lucy Foley doing all that bad stuff well: Set in a dark boggy island amid thunderstorms, screams in the night, drunkenness, bullying, obnoxious frat-boy types, every character a little shady, every character a suspect of killing somebody. The trick the author played which I don't think I've seen before is the reader doesn't even know who the victim is, much less who killed them, until the end. Clever with a capital C.

Most of the negative reviews I read focused on the fact that none of the characters were likable. What's wrong with that? I enjoyed that part. Seems more relatable than everybody being likable. Have you ever met any people?