We've been on one of those streaks everybody has where if it weren't for bad news there'd be no news at all. 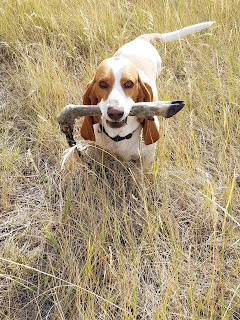 So it was on Friday morning when I was getting dressed for my father-in-law's funeral in Sioux Falls that I received a text from the neighbor watching our dogs: "Sorry to bother you at this time. One of the dogs knocked the medicine bottle off the counter, chewed it open and ate it."

It's actually a pretty good system the dogs have where if you aren't careful, and we often aren't. Stanley, the 10-year-old Golden/Lab, puts his front feet on the kitchen counter or oven and sees if the idiot owners have left anything good. Mmmm, bacon grease in the frying pan. Mmm, a bag of chips, box of chocolates, sleeve of crackers, etc.

Then he knocks the goodies onto the floor and he and Huckleberry, his six-year-old sidekick Basset Hound buddy, dive in. This time the results were more than one of them bargained for.

Before we'd left for the funeral I'd refilled Stanley's medicine. He is on Rimadyl, a pain-killer/anti-inflammatory he's been taking this past few months to help him deal with his long-running battle with cancer. One pill in the morning and one at night has really helped and he's seemed as good as new. The good and bad thing about Rimadyl is that it tastes good. It's liver flavored and he takes them like treats.

So I had a full 60-count bottle on the counter for the sitter that I'd even added a few from the old bottle. They were all gone.

A quick Q&A with the dog-sitter revealed that Huck most likely ate them all. He does that because he eats every meal or treat like it is his first and last meal. He attacks food with a fervor. Wifey even tossed some blame my way for teaching him how to open bottles. It's a trick he does when we're done with a hike or jog and I drink my Gatorade. He takes the bottle, chews the lid off, spits it out and licks up the last couple drops of liquid inside. It's a talent of his, the only one.

Anyway, in between bathroom duties I called the vet. She said we better get him in. I told her I was 350 miles away and I'd get back to her. As the family waited in the church basement before the funeral I hit up my niece, a pharmacist for humans, for some free advice. She looked up Rimadyl on her phone, read the ingredients, said it was basically ibuprofen and if we didn't get it out of Huck in the first hour or two it was probably already soaked into his system and not much we could do.

There was basically a window of about 12 hours now where Huck could have eaten the stuff. So we didn't know. After a little more Googling, I made the executive decision to put my faith in Huck's cast-iron stomach and general orneriness. The dog-sitter checked on him every couple hours and said all seemed fine.

Back home on Friday night. Huck heaved up several times during the night more food than I thought his 60-pound body could hold, but was otherwise the same old Huck. Symptoms to look for, according to the computer, were drowsiness, depression and laziness. Heck, that's him on a good day.

Twelve hours after the last puke, I started him on a diet of small servings of white rice and canned chicken breast. Saturday I noticed a little blood in his stool, but not much. He was peeing plenty and eating and drinking fine.

Sunday he was his usual self, annoying Stanley, barking at neighbors, and barking at wifey while she was eating popcorn. He didn't get any.

So it looks like his liver and kidneys may have survived. Only my checkbook took a hit for another $100 when I had to go in on Saturday morning for another bottle of drugs.

Oh, and on the way, the brakes went out on my old pickup and I had to take it to the repair shop.

The hits keep on coming.
Posted by Mark Haugen at Sunday, February 09, 2020