Henry Ford said: "Two percent of the people think; three percent think they think, and 95 percent would rather die than think." ** So apparently "Kurt Russell" were the last words Walt Disney ever wrote. Interesting interview with Goldie Hawn's husband here. I'm going to make this my one movie of 2016.

** The stories this guy could tell. What a life.

** Another study that is not exactly rocket surgery.

** So the President had a bad year.

** Get your wine on, in the mail. There are many South Dakota wineries that will make you forget about those other states that think they are the only ones that can grow grapes.

Effective January 1, 2016, any winery located within or outside of the state may ship wine to South Dakota consumers if they have met the requirements to obtain a wine direct shipper license.

** It's Charlie Robison's New Year's Day in the red dirt of Texas. Take a listen, and don't miss the Casey Donahew Band in Deadwood next week! I'll be there with Ulm, my black-hatted partner in crime.
Posted by Mark Haugen at Thursday, December 31, 2015 No comments:

I put aside the serial killer blood and guts and noir detective sleeze novels for Advent season (or at least a week of it) and decided something a bit more thought-provoking and religious might be in order.

The book is great, thought-provoking, straight-hitting and entertaining. He delves into church history, the Founding Fathers, JFK and recent history to about 2008 when the book was published. He writes in a non-academic manner that even a goof like me can understand. He basically urges Catholics and all Christians to be vocal and informed and not afraid to espouse their faith in all parts of life and in politics. I filled the book with highlights, notes and asterisks.

I finished it just before Christmas so, I digress a bit here, it was especially noticeable when I saw political messages on social media using Christ's birth as fodder. It's interesting how the Gospel according to Joe Facebook often differs from Matthew or Luke as to fit Joe's political issue of the day. To some, Mary and Joseph's 65-mile trek to Bethlehem to be counted for Caesar's census is somehow analogous to the immigration issue or to homelessness. Ironically, those arguments often seem to come from people who wet their pants when Christians cite the Bible in opposition to abortion. Others like to incorrectly cite "eye for an eye" as support for the death penalty. Seems like Bible stories, like statistics, can be twisted for the beholder.

But no political party is immune from hypocrisy, and Chaput clearly states too that there is no one party for the Catholic faith either. All have their pros and cons.

Chaput writes: "But too oftentimes, I find that both these slogans - 'don't impose your beliefs on society' and 'the separation of church and state' - have little to do with fact. Instead, they're used as debating tools; a kind of verbal voodoo. People employ them to shut down serious thought."

And: "People who take God seriously will not remain silent about their faith. ... As a friend once said, it's like asking a married man to act single in public. He can certainly do that - but he won't stay married for long."

So speak up. Read this speech of his.

And read this book! Unless you're afraid.

The tail of Ragnar

I could write a book about my history with rabbits. From the death of Johnny Depp while we were on vacation to the shooting incident with Prince there are quite a few stories to tell. But none would be sadder than the tale of our current rabbit Ragnar. 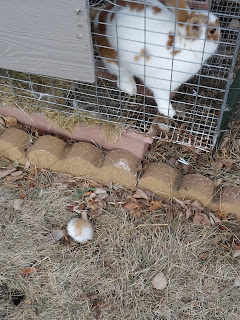 Ragnar is my fertilizer machine, and being a Norwegian he is quite good at spreading the fertilizer, if you know what I mean. From April through November he lives in a spacious cage with all the amenities down in my garden. He feasts on lettuce, cabbage, turnip leaves, whatever is green and available. Occasionally he is let out to free range inside the fenced in garden. He has a pretty good life.

Then when cold weather, and the time change, hit, he gets moved to his winter home which is closer to our house. The cage sits below a plum tree, next to a bird bath, and right outside my kitchen window so I can wave to him in the mornings. It also reminds my feeble mind to go out and feed and water and talk to him. Yes, we talk. Well, I talk. He listens.

So all's been well this winter. In fact, I was outside last weekend and resupplied his rabbit hole/bedroom with dead grass and straw and shredded paper from work. He seemed safe, secure and happy. That was until this morning when I looked out the window while eating my toast and noticed everything askew in the rabbit world. The cage was still standing, but off kilter. The big dried up potted plant next to it was knocked over, as was the bird bath. The roof of his cage was in pieces. Yet Ragnar, ever the cool Viking leader, was nibbling on his pellets.

A similar thing happened a couple years ago and I blame a neighbor from down the road whose dogs get loose and rambunctious and take about terrorizing bunnies. I haven't seen them loose in a while, so I can't say it's them for sure but they are at the top of my suspect list. Just above coyotes, perhaps even a deer who came streaking through the area, or a small chance of a mountain lion. Though I'm pretty sure I'd be writing Ragnar's obit today instead if it were a lion.

Anyway, this morning, while I waited for my vehicle to warm up, I went about picking up the area. Fixing his roof and arranging his feeder and such, I noticed this furry thing on the ground. I figured it was some fur that went flying, as Ragnar has a nice puffy winter coat about now. But it wasn't that. It was his tail! I'm a guy who is oft accused of being cold-hearted and unfeeling, but not when it comes to my dogs or my rabbit. I felt terrible for him. It's like he had been violated. My guess is that when he was being attacked, he raced around in circles in his cage, as I've seen him do, and somehow his tail got caught in the wire. Ouch. Even worse would be if it was sticking out of the cage and something bit it off. Ew. He otherwise seems okay. There was no blood. But it did set off a pretty funny text message routine between myself, wifey and junior.

It concluded with her asking: "Can rabbits live without a tail?"

Star Wars! Just kidding. Nothing about Star Wars here. Not interested. But I plug it like I plug Amanda Knox! because it's a Google-getter and the people who end up here to see what's up sometimes even buy books by our favorite author. 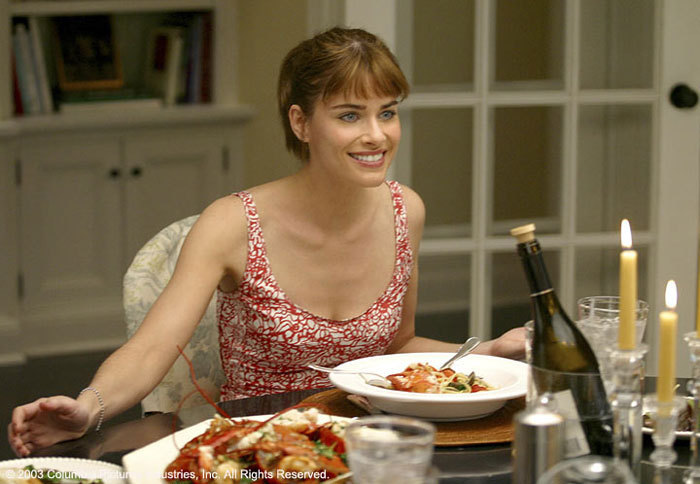 Assuming you are on the internet now, then I'm assuming you've been to dictionary.com to look up some of the big words I use; even if you're just here fugaciously or because of your propinquity to me.

Not to be outdone by Time Magazine announcing its person of the year, dictionary.com announced its 2015 Word of the Year, which they say encapsulates "the most robust fields of language evolution and user interest this year."

Obviously, if they choose anything besides "Kardashian" or "breast" they are lying. But that doesn't stop internet sites. Should I ruin it for you or let you click on the link? I'll ruin it for you, because that's the kind of guy I am.

The word of the year is: "identity."

Of course it is.

And if you need to ask why there's a picture of Amanda Peet, as if I need a reason, Google it.

** Do you folks listen to podcasts? I'm kind of a novice at them, but they're growing on me. I heard good things about Serial.

Their new series is out on the controversial deserter and Jason Bourne-wanna-be Bowe Bergdahl. I'm going to give it a go. Sounds interesting.

Their first season was on Hae Min Lee "a popular high-school senior, disappears after school one day. Six weeks later detectives arrest her classmate and ex-boyfriend, Adnan Syed, for her murder. He says he's innocent - though he can't exactly remember what he was doing on that January afternoon. But someone can. A classmate at Woodlawn High School says she knows where Adnan was. The trouble is, she’s nowhere to be found."

** This story claims researchers are fine with your kids climbing on the monkey bars.


Failure, danger, and aversion to risk are becoming the center of the conversation, and it really does start at the playground. Consider the “safe” playground: a structure that takes the risk out of the equation.

So screens may cause their own problems, but as far as mental health at early stages goes, the biggest concern appears to be keeping kids from getting up, getting creative, and doing stupid things. Same for helicopter parenting, bland adventure-less playground equipment, and constant supervision.

** And this was a big ol' joke by the New York Times: The most pressing issue in 95 years finally gets editorialized on the front page.

** And if a guy didn't know better you'd think the NYT was a tad liberal. Here's their story on Ted Cruz.


“Why do people take such an instant dislike to Ted Cruz? It just saves time.”

About the only one that somewhat interests me is - One of Us: The Story of Anders Breivik and the Massacre in Norway.

Otherwise I don't see anything I can't live without.

** Why does Europe hate Israel so much? Brendan O’Neill takes a stab at it in: The wretched reason why Israel became Europe’s whipping boy. I'll ruin it for you again:


Plucky, keen to protect its sovereignty, considering itself an outpost of liberalism… Israel is a painful reminder to today’s morally anchorless European thinkers and agitators of what their nations once were.They hate Israel because they hate themselves.

** And what would the world be without the wisdom of Arnold Schwarzenegger? This story claims Arnold has been a passionate advocate for alternative energy, and I would add pretty passionate about his housekeepers as well.

And the great communicator knows he's right and you are wrong and no he's not being a bully because he's over-compensating for something small.

Well, thank you sir for your kind consideration.

** Here's this week's music link you and Arnold can chill out to in case you might have missed it on NPR: Jump the Gun by Halestorm.
Posted by Mark Haugen at Thursday, December 10, 2015 No comments: