Longmire author to be in Custer

Next Saturday I’ll be tossing my younger daughter’s dorm junk into my old Dodge pickup and heading back west with SDSU in my rear-view mirror and hoping to make the 5 p.m. appearance of Craig Johnson at the Custer Library. Johnson is the author of the Longmire series of books, now made into a television series on A&E. Honestly, I haven’t read any of his books, but I intend to. I have, however, watched the television shows and enjoyed them.

People who know that kind of stuff tell me the shows are good, yes, but the books are even better. So I hope to have an opinion on that soon.

And I think it’s cool he’s going to be in Custer. He probably heard about my book-signing in Sturgis and had to be a one-upper. Having his own television series wasn’t enough. Next thing you know he’ll have his own website with his own name as the web address. Yep, nailed it.

Good day in the Badlands

The breaking news of the day is that I finally met author/buffalo rancher Dan O’Brien today. It’s odd we haven’t met before, since he lives just a few miles down the highway and we share some mutual interests. But it finally happened, and we had a nice chat out in the snow-covered Badlands while visiting the Kudrna Ranch and the century-old sod hut on their place. 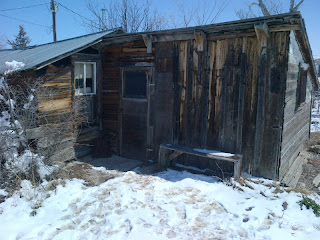 Mr. O'Brien mentioned his next book is coming out Aug. 1. Be sure to check that one out and some of his others while you are waiting.

*** The ol’ alma mater, Augustana College, is hosting the 45th Annual Dakota Conference on Saturday, April 27. It will include a panel discussion titled: “The First Draft of History” at 8 a.m.

Panelists will include: Chet Brokaw of AP; Noel Hamiel of Yankton and Mitchell papers; Tom Lawrence of Argus, RC and Mitchell papers and formerly of my fantasy baseball league back when stats were kept on paper instead of via computer; and Kevin Woster of the RC Journal.

The ad for this lovefest offers this: History and historians are highly dependent upon the stories filed by the newspaper reporters of a previous era. It is commonly said that the news reports in newspapers are the “first draft of history” because they have such a strong influence on the later interpretation of events. During this panel discussion, four long-serving South Dakota political reporters will each reflect on their more than three decades in the front-line trenches of newspaper reporting and discuss how the profession functioned when they launched their careers, how the industry has evolved, how it has been affected by the internet, and how their output can and should be used to craft successive interpretations of the historical record.

*** This is interesting, from the NYT: Amazon Kindle Singles is a hybrid. First, it is a store within the megastore of Amazon.com, offering a showcase of carefully selected original works of 5,000 to 30,000 words that come from an array of outside publishers as well as from in-house. Most sell for less than $2, and Mr. Blum is the final arbiter of what goes up for sale.

*** Reportedly, this is the Amazon wish list of the one of the BM Bombers.

*** Get ready for 896 glorious pages on the Madame Thatcher.

From the NYT: When the Pulitzer Prize-winning playwright and author David Mamet released his last book, “The Secret Knowledge: On the Dismantling of American Culture,” with the Sentinel publishing house in 2011, it sold well enough to make the New York Times best-seller list.

This year, when Mr. Mamet set out to publish his next one, a novella and two short stories about war, he decided to take a very different path: he will self-publish.

Bombers could learn from boxers

One of the troubles with being a terrorist bomber is you don't get to choose your own nickname. The media or law enforcement do it for you.

In past years we've had the Shoe Bomber and the Underwear Bomber. This past few hours it's been the "Number 2 Bomber" we've been hearing about. I've also heard him called the "BM Bomber." Both sound like he did something in the bathroom.

That had to bug ol' No. 2 a little, while he was cowering in the boat, bleeding, waiting for a Boston cop to pop a 9 mil in his forehead. He'll go down in history as the weasely punk loser who killed an 8-year-old child and two young women and, to top it all off, now has the nickname of a bowel movement.

Seems if you're going to be a bomber, you should leave a note or a manifesto, and give yourself a nickname like boxers do to avoid just that kind of embarrassing situation.

So these idiots could have been Tamerlan "Sweet Pea" Tsarnaev and Dzhokhar "Money" Tsarnaev. But I guess they were too busy building bombs, reading Jihadi websites and hating people to worry about marketing. Besides, I'm thinking "BM Bomber" is very appropriate. In fact, it's way too nice.
Posted by Mark Haugen at Friday, April 19, 2013 No comments:

Read this and you'll be wiser

I'm kind of a big fan of the new guy, so found this in the Wall Street Journal especially interesting: Fifteen Days in Rome: How the Pope Was Picked - The inside story: From the Red Room where Bergoglio's name was first dropped to a faithful night on Rome's Piazza Navona

"We've been arguing intra-ecclesia," Cardinal Cipriani Thorne said. Cardinal Bergoglio's speech was a call to stop "messing around" and "get to the point: It's Jesus."

The essay in the WSJ is an excerpt from the new e-book "Pope Francis: From the End of the Earth to Rome," available at PopeFrancisTheBook.com.
Posted by Mark Haugen at Friday, April 19, 2013 No comments:

I'm told by a guy who knows this kind of stuff that The Presidents Club: Inside the World's Most Exclusive Fraternity is a "great, great book."
Posted by Mark Haugen at Thursday, April 18, 2013 No comments:

Finished Stephen Hunter's The Third Bullet last night, and it was a struggle. I don't mean struggle in the sense that I didn't enjoy the book. In fact, when I finish a tougher read, I often ask myself if the book was worth it. Was it worth the time spent? Would I have enjoyed watching Seinfeld reruns better? With The Third Bullet, I'm glad I spent the time reading it.

The struggle came in the details. Hunter is a guns and ammo nut. You can tell he's an expert in that, and he expounds on his interest in the afterword to the book. Me, while I enjoy my guns, about all I know is the difference between a .22 short and .22 long, that you can get them in hollow point, and that 12-gauge shells are bigger than 20-gauge shells. So I got a little bored with the guns-n-ammo over-kill. But I know a lot of gun people, and probably most Hunter fans, do enjoy that. So they'll love this.

Others who would enjoy it are people like my late father, who was a JFK assassination nut. I have probably 15 of his tomes on the JFK shooting. I think it was a generational thing - how, obviously, JFK touched a lot of people (and not just hotties in the White House). In this book, Hunter took the Warren Commission Report and made his conspiracy theory fit within the bounds of the facts presented there. That's probably the most impressive thing about the book - how he made that work.

One negative: I can't say I particularly like Bob Lee Swagger getting old. I think he's 65 in the book, getting slow, getting cranky. Some of the "swagger" was missing from this book.

All told, if you are a gun nut, JFK nut or Swagger nut, you should read the book. Just be prepared for some heavy lifting.