Sam Childers is a tough guy for me to figure out. It doesn't seem like I'm alone in that assessment.

He is the author of a couple books, subject of an award-winning biopic in which Gerard Butler played him, is a missionary to children in Africa and is known as the Machine Gun Preacher.

I went to a book-signing of his last week in Rapid City. Frankly, I'd never heard of the guy, but in reading the "tonight's happenings" in the paper I decided to Google his name and he looked like an interesting man I'd like to meet. I didn't know it until I arrived, but the event was hosted by a local Baptist church, and I think they were expecting a lot more people, since it was held at the Ramkota, but only about 30-35 people showed up. They were set up for a couple hundred.

He's an interesting fella, to say the least. A former druggie, dealer, alcoholic and motorcycle gang member, he found Christ and is doing Christ's work as he sees fit, and probably not as more conventional Christians might be comfortable with. Childers admits as much in his second book Living on the Edge, saying he carries the Bible in one hand and an AK47 in the other.

Oddly enough, there are similarities between Childers and Bobby Trane, the main character in my most recent novel which is in its editing stage at the moment. Though in Bobby Trane's case, it's more that he's just an unconventional man of the cloth, without most of the foibles Childers has overcome.

I just finished reading Childers' second book (which he signed for me). I found myself alternately thinking "this guy is a head case" and then "but he's doing some really good things." Even listening to his presentation the other night I felt like the guy was really full of himself. At times I thought he was just using this missionary thing to pad his own wallet. He's still rough around the edges, as one would imagine a person needs to be when operating in the Ugandan and Sudanese areas he does.

But as I've taken some time to digest his book and the presentation, I've concluded that he needs to be the way he is in order to do the things he does. I don't think you could take a seminary-educated, middle-class raised, polite, soft-spoken minister and plop him into the middle of Africa and expect him to survive two weeks much less go on to open six children's villages and provide safe refuge and education for older teens like Childers has. He seems to be a man who has gone through the things he's gone through for a reason, and he's making the most of it. He's helping people, and doesn't seem to really care what others think of his methods, though he spends a lot of time talking and writing about what they say.

He acknowledges his faults, seems to recognize that many don't agree with his methods. But, all in all, he's doing more good in this world than most of the people I'll see in church tomorrow, me included. God's speed, Mr. Childers.
Posted by Mark Haugen at Saturday, November 22, 2014 No comments:

Jonah Goldberg began his weekly email newsletter this morning with: "Like a cannibal in a coma ward, I have no idea where to begin."

Wish I'd thought of that. It sure beats the following ... In my neck of the woods, one of the hot topics is the U.S. Fish and Wildlife Service considering listing the Northern Long-Eared Bat as an endangered species. It's not as hot as the local debate over whether to allow the city folk to raise chickens in their backyard or as sizzling with controversy as the new Starbucks sign on the historic Alex Johnson Hotel. But it's hot, and frankly, a lot more meaningful. If the bat is listed as endangered it could mean some pretty significant changes in the Black Hills.

As such, I've attended a lot of meetings on the subject and thought I knew more about the NLEB than I would ever want to, when lo and behold, another nugget of knowledge was dropped on me today.

Apparently these little buggers (whose babies are known as pups) are one of the few creatures to experience delayed fertilization.


Breeding begins in late summer or early fall when males begin swarming near hibernacula. After copulation, females store sperm during hibernation until spring, when they emerge from their hibernacula, ovulate, and the stored sperm fertilizes an egg. This strategy is called delayed fertilization.

After fertilization, pregnant females migrate to summer areas where they roost in small colonies and give birth to a single pup. Maternity colonies, with young, generally have 30 to 60 bats, although larger maternity colonies have been observed. Most females within a maternity colony give birth around the same time, which may occur from late May or early June to late July, depending where the colony is located within the species’ range. Young bats start flying by 18 to 21 days after birth. Adult northern long-eared bats can live up to 19 years.

Think of the implications if humans were capable of this. On second thought, don't. We have enough problems.

** Speaking of batty ... how about the woman marrying the nutburger Charles Manson. According to this, mass murderer's wedding plans not that unusual. I guess they have groupies with daddy issues.


Still other devotees might simply be content in always knowing where their man is at 2 o'clock in the morning, that he may be behind bars, but at least he's not out in the bars with some other woman.

** This guy has some pretty cool photos of my backyard:


Between 1887 and 1892, John C.H. Grabill sent 188 photographs to the Library of Congress for copyright protection. Grabill is known as a western photographer, documenting many aspects of frontier life & hunting, mining, western town landscapes and white settlers’ relationships with Native Americans. Most of his work is centered on Deadwood in the late 1880s and 1890s. He is most often cited for his photographs in the aftermath of the Wounded Knee Massacre on the Pine Ridge Indian Reservation.

And here's a link to his pretty crazy homepage.

** Big fight this weekend: Everybody knows Manny Pacquiao, but this Chinese boxer is the next one to watch.

** Goodreads asks: What do men and women want when it comes to books? Are they reading their own gender? And what do they think of books written by the opposite sex?

** And from Mother Jones, of all places: Why the white working class hates Democrats.

To be followed by a special investigative report where they apparently found a U. of North Carolina athlete who actually attended a class. Shocking!
Posted by Mark Haugen at Friday, November 21, 2014 No comments:

The tallest building in the Western Hemisphere opened this week in New York – 1World Trade Center. As promised, since I have some old papers, I thought this might be a good chance to post them rather than waiting until next September.

Here is the 9-11 Extra edition of the Argus Leader: 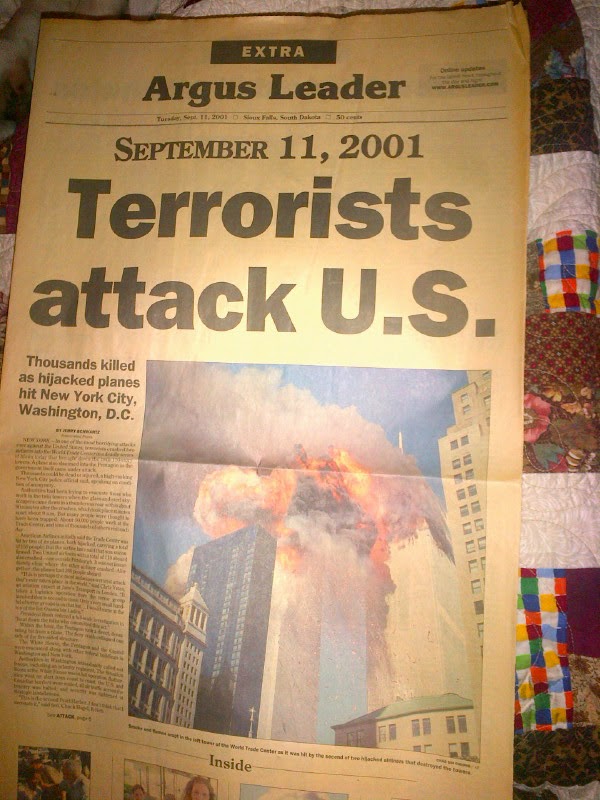 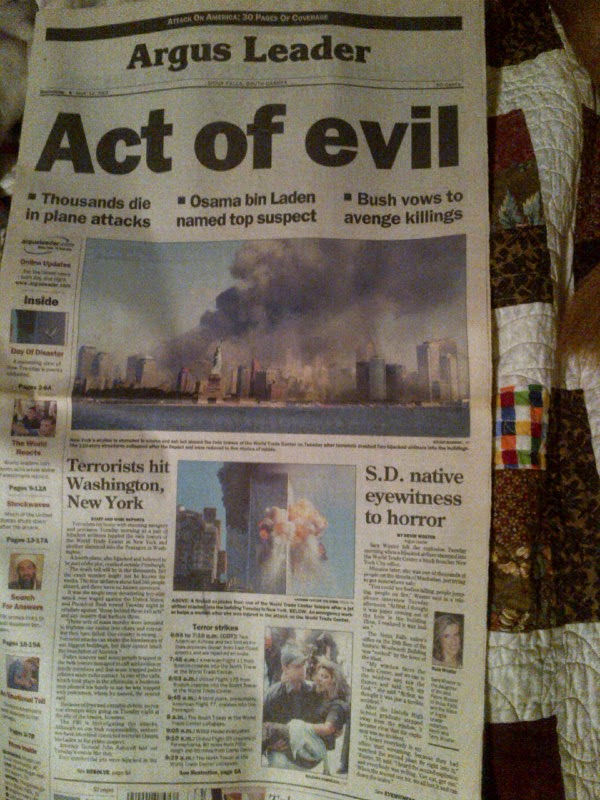 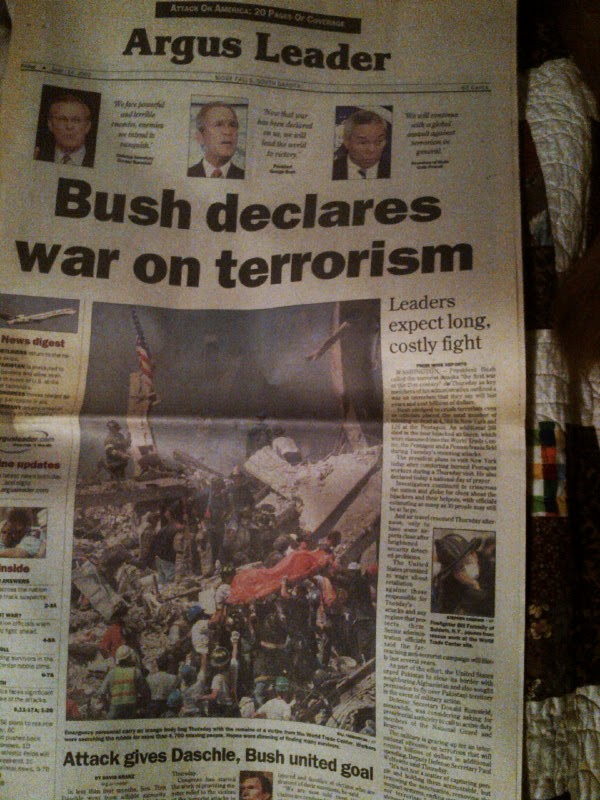 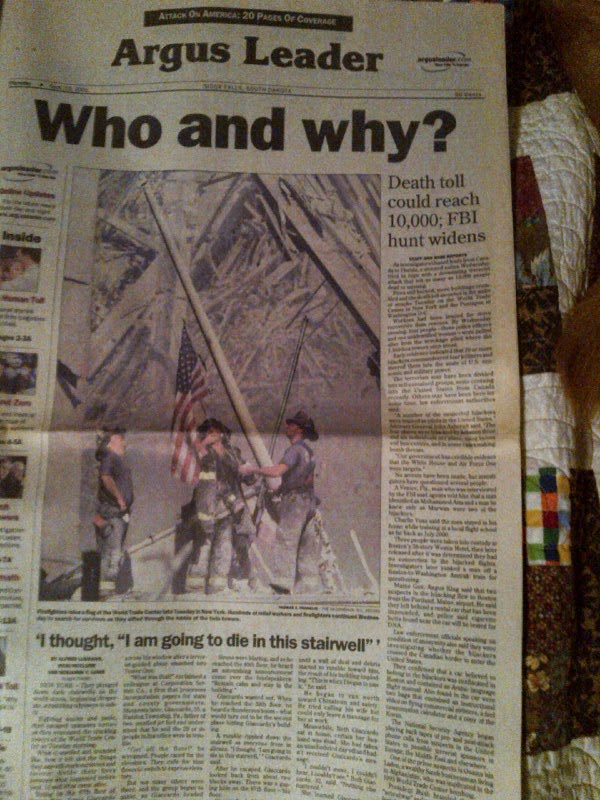 Posted by Mark Haugen at Saturday, November 08, 2014 No comments:

Apparently there's some argument going on in a world outside of mine, where a professor is claiming that Mrs. Bach actually composed some of Mr. Bach's most famous works.

And then I was most shocked to learn: What? Anne Hathaway didn't write Shakespeare's plays?


Professor Jarvis is a charming and sincere man – I met him then to talk it over. But I’m afraid that his theory is pure rubbish. Anna Magdalena Bach did not write the Bach suites, any more than Anne Hathaway wrote Shakespeare’s plays, George Henry Lewes wrote George Eliot’s novels, or Freddie Starr ate his friend’s hamster.

** So I was reading a post at thechive.com about scary movies based on true events and ran across a shocker I'd never heard before. 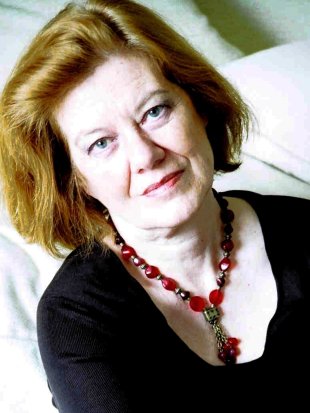 There's a movie called Heavenly Creatures, based on a murder involving Anne Perry.


On 22 June 1954, the girls and Honora Rieper went for a walk in Victoria Park in their hometown of Christchurch. On an isolated path Hulme dropped an ornamental stone so that Ms. Rieper would lean over to retrieve it. Parker had planned to hit her mother with half a brick wrapped in a stocking. The girls presumed that one blow would kill her but it took more than 20.[3]

Parker and Hulme stood trial in Christchurch in 1954 and were found guilty on August 29 of that year. As they were too young to be considered for the death penalty under New Zealand law at the time, they were convicted and sentenced to be "detained at Her Majesty's pleasure". In practice, this sentence meant they were to be detained at the discretion of the Minister of Justice. They were released separately five years later.

In case Anne Perry doesn't ring a bell, she should. As in international, best-selling, historical author Anne Perry!

Now it's all coming together for me. So she did five years in the clink and gets out and becomes rich and famous. Some people have all the luck.
Posted by Mark Haugen at Sunday, November 02, 2014 No comments:

14 years ago - the hanging chads

Among the list of nerd things I do is collect front pages of various newspapers. I'm going to try to post more in the near future, and I really dropped the ball by not sharing last week some of the World Series ones I have (think Twins). Live and learn.

Here are three covers to remind you of why your vote matters, even when you think it might not.

Here's the first run off the press: 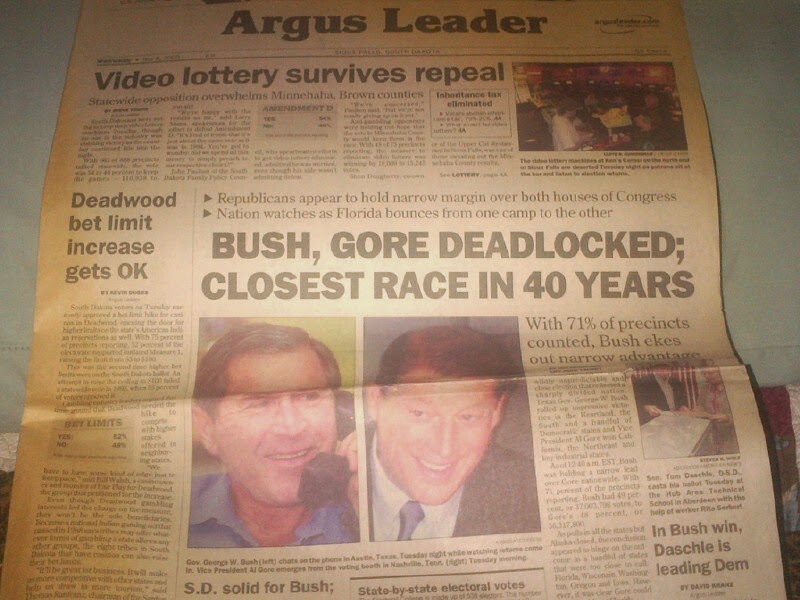 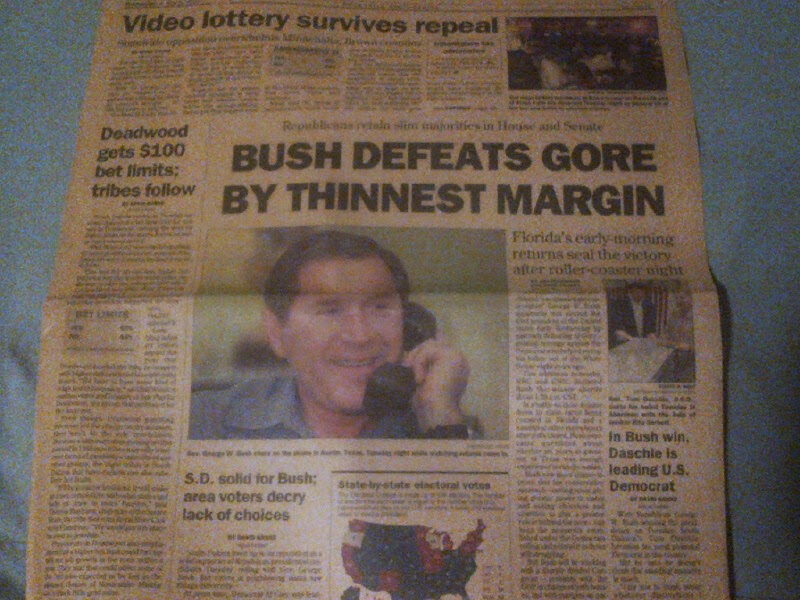 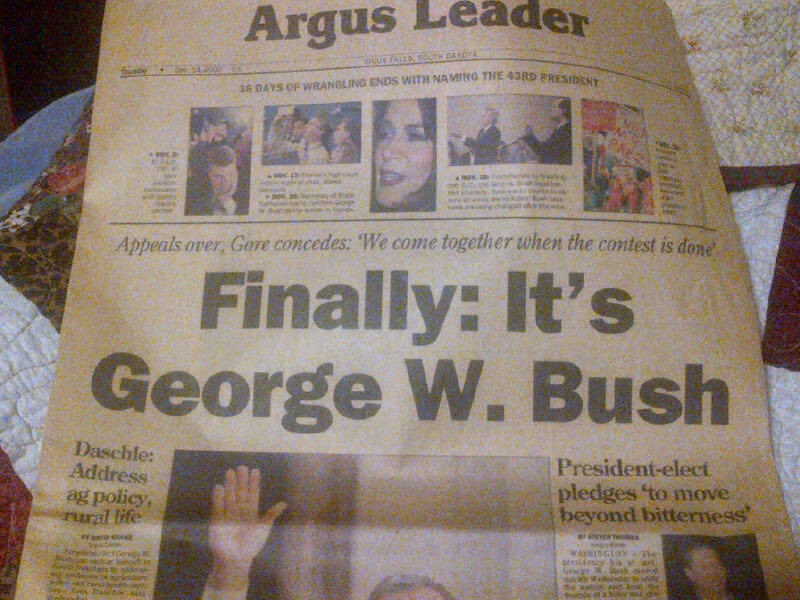 Posted by Mark Haugen at Saturday, November 01, 2014 No comments: