A garden with lots of twists

Last week when we were in Illinois, our daughter took us to a really cool place called Allerton Park about 20 minutes outside Champaign. The 12,000-acre park is considered one of the Seven Wonders of Illinois, along with the Cubs, Rob Blagojevich and Chicago’s murder rate.

It was built on the private estate of Robert Allerton and is now managed primarily by the U of Illinois. Allerton made his money in hogs, parlayed that into the Chicago Stockyards and founder of First National Bank of Chicago. Basically, his family was rich. And he had a son who was an artsy-fartsy guy and began creating this landscape which includes forest, grasslands, trails, a mansion, gardens and sculptures. 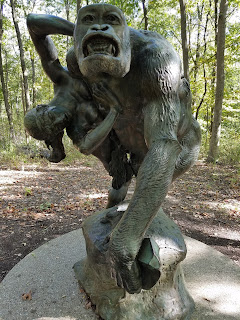 Befitting a splendid Georgian manor house, the Formal Gardens feature extensive plantings and over 100 ornaments and sculptures to discover.
“He created a picture in the garden. Yes, he painted with vegetation instead of oil and canvas.”

Being a sophisticated liberal arts dude myself, I found the place to be “really cool.” I’m sure that’s what the Allerton family was going for. "Hey, Alice, let’s build a really cool place hicks from South Dakota can come to and walk around."


It has been described as "a vast prairie turned into a personal fantasy land of neoclassical statues, Far Eastern art, and huge European-style gardens surrounding a Georgian-Revival mansion" .

I liked that it was a very eclectic place. You could be walking by a huge peony garden, then down a hiking trail for half a mile and come across a huge bronze sculpture of a bear attacking a man. Then through the forest and out into an herb garden or into a Buddhist sculpture garden or Chinese maze garden. 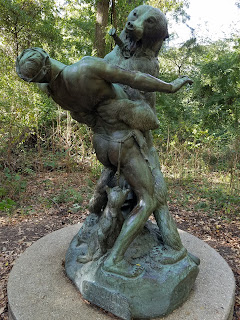 Pictured here are the Fremiet sculptures:

Two bronze sculptures by the French artist Emmanuel Frémiet (1824-1910) were returned to Allerton Park in September 2016. The sculptures are not original Allerton pieces, but were donated to the University of Illinois in 1959 and subsequently placed along the park trails. They were loaned out for a traveling exhibition in 1980, moved from the park to the Krannert Art Museum in 1988, and finally placed in storage until new settings were created in the park.

Popularly called Gorilla Carrying off a Woman and Bear and Man of the Stone Age (Denicheur d′Oursons), they depict violent encounters between animals and Stone Age people.[33] Subject to controversy since they were created in 1885 and 1887 because of the violent subject matter, they are, however, immensely popular with park visitors who enjoy being surprised by finding them in the woods along the Orange Trail.

All in all, this was the type of place for a romantic get-away with the significant other or a nice family outing. You can take an hour or a day. It was pretty cool.
Posted by Mark Haugen at Friday, October 06, 2017